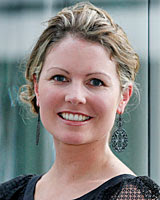 Dr. Rebecca McLeod
Excellent. Like recent Kathryn Tabb [Darwin Correspondence Project (United Kingdom)] another young woman has taken the top MacDiarmid Young Scientist of the Year Awards prize in New Zealand for her research on rain forests that their reduction "...can destroy life deep below the sea's surface, as well as that below the trees...."

The New Zealand Herald
Cutting down rainforests can destroy life deep below the sea's surface, as well as that below the trees, a young Dunedin scientist has discovered.

She began to research the fish's diet, and discovered a complex food web - coastal deep-water creatures relied on neighbouring coastal forests for their food.

Slips and rivers transport logs and leaves to the sea. The vegetation sinks, rots like compost on the seafloor and produces hydrogen sulphide. That is then taken up by bacteria and, through chemical reactions, is turned into carbohydrate energy.

Those bacteria live inside clams and worms, which are eaten by the hagfish - meaning the forest nearly half a kilometre above is feeding the deep-water fish below.

She concluded the fish depended on the forest above for half their nutritional needs. Other common species, including blue cod and rock lobster, also obtained energy originally from the forests, she found.

Fiordland was one of the few places where intact rainforest bordered a pristine marine ecosystem, she said.

"That environment gives us an insight into how our coastal ecosystem functioned before humans started cutting down trees. That link, between the condition of the forest and marine life, has been largely ignored in the past.

"I guess we'll never really know how much the deforestation that's been carried out already has altered the marine environment."

Her win includes a cash prize of $10,000 and a trip to Britain to attend the British Association for the Advancement of Science festival. She is named the Young Scientist of the Year and also receives the MacDiarmid Medal.

Dr McLeod said the award would help her chances of securing research funding in New Zealand, allowing her to stay here and achieve her long-term goal - to be a NZ-based academic.

The lead judge of the awards, Rutherford Medal winner Professor Richard Faull, said the judges had looked for innovation and research brilliance, mixed with good communication and simple concepts.

[Thanks to stringer Tim.]
Posted by Mercury at 4:42 PM

I'm not from New Zealand, but I comment on this because environmental concerns are global. They are also complex, and can only be understood with the involvement of people from around the world. Dr. McLeod is one of the many young people who have chosen to invest their careers in understanding and solving the environmental problems that they have inherited. Comment from http://cmcallister.vox.com/