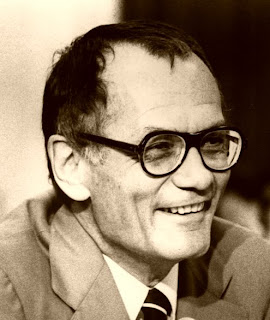 Robert Jastrow
September 7th, 1925 to February 8th, 2008
"There is a strange ring of feeling and emotion in these reactions [of scientists to evidence that the universe had a sudden beginning]. They come from the heart whereas you would expect the judgements to come from the brain. Why? I think part of the answer is that scientists cannot bear the thought of a natural phenomenon which cannot be explained, even with unlimited time and money. There is a kind of religion in science, it is the religion of a person who believes there is order and harmony in the universe, and every effect must have its cause, there is no first cause...

This religious faith of the scientist is violated by the discovery that the world had a beginning under conditions in which the known laws of physics are not valid, and as a product of forces or circumstances we cannot discover. When that happens, the scientist has lost control...

Consider the enormity of the problem. Science has proven that the universe exploded into being at a certain moment. It asks, what cause produced the effect? Who or what put the matter and energy in the universe? Was the universe created out of nothing, or was it gathered together out of pre existing materials? And science cannot answer these questions".

American Institute of Physics
Physicist Robert Jastrow died from pneumonia on 8 February 2008 in Arlington, Virginia, where he had spent his last few years. Born in New York City on 7 September 1925, he was the quintessential New Yorker, and lived there most of his life. He attended public schools there and earned all his academic degrees at Columbia University—his AB degree at Columbia College in 1944 and his master's and PhD degrees at the university in 1945 and 1948, respectively. And New York was where he established the Institute for Space Studies, burnished his reputation as a leader in science, and enjoyed the ambience of a city that has everything. At the end of the day, he could be seen jogging in Central Park, often dragging along colleagues and institute visitors. But when he needed relief from city life, he would drive to the mountains of New Hampshire and Vermont to hike or ski, or fly to the Caribbean to swim and jog along the beach.

In 1950, while at the Institute for Advanced Study in Princeton, New Jersey, he published in Physical Review a short paper that drew considerable attention. He solved what was at that time a perplexing problem: the inability to explain experimental measurements involving proton–proton and neutron– proton interactions. By postulating the existence of a short-range repulsive force between nuclear particles, inside the longer-range attractive force that holds nuclei together, he was able to reproduce the key features of the measurements. The potential energy that characterizes the combined attractive-repulsive force is known as the "Jastrow potential."

He continued his research in nuclear physics after joining the US Naval Research Laboratory in Washington, DC, in 1954. But in 1956 he became excited by the idea of doing scientific research beyond Earth's atmosphere and joined the newly created Vanguard Project, the US's initial involvement in space. He was doing calculations on the atmosphere's effect on satellites when Russia launched Sputnik 1 in October 1957. When it came down from orbit three months later, Russia claimed it fell in Alaska and accused the US of confiscating it. That accusation melted away at a scientific meeting in Moscow, where Jastrow presented calculations based on the last radar sightings, showing that the satellite fell over Asia, perhaps in Russia's own backyard.

With Jastrow's growing prominence as a space scientist, he was invited in 1958 by Homer Newell, a key NASA organizer, to become chief of the theoretical division of the US's newly established civilian space program. He proceeded to play an important advisory role in developing NASA's science program. As chairman of NASA's lunar exploration working group from 1959 to 1961, he brought in Harold Urey, recipient of the 1934 Nobel Prize in Chemistry, to help shape the research program that led to several missions to the Moon, which Jastrow called "the Rosetta stone of the solar system." Jastrow would point out that the Moon preserved on its surface the solar system's history, which had long ago been erased from Earth due to tectonic activity and surface weathering.

NASA's primary mission is to develop the tools to explore and use space for the benefit of humankind. Science is one of the benefits, and Jastrow represented NASA's bridge to the scientific community. NASA's scientific talent then resided in the theoretical division, which was slated to become part of the new Goddard Space Flight Center in Greenbelt, Maryland. Jastrow was concerned that science might not flourish in the confines of a government center. He felt that NASA needed an advanced scientific group that was connected to the academic community and could draw on the talent available in academic institutions worldwide. He envisioned an organization modeled after the Institute for Advanced Study but remaining an integral part of NASA; it could use NASA resources for research and, at the same time, help shape NASA's scientific program. With Newell's support, Jastrow established the Institute for Space Studies (later renamed the Goddard Institute for Space Studies, or GISS) in 1961 at Columbia.

During Jastrow's 20 years as director of GISS—he retired from NASA in 1981—scientists from around the world came to visit and collaborate with the permanent scientific staff. It was an idyllic atmosphere where cosmologists, astronomers, geophysicists, and atmospheric scientists intermingled. Upper-level undergraduate students from US universities, many now highly accomplished scientists, were awarded summer stipends to attend lectures at GISS and assist in research projects.

While Jastrow was motivating scientists to use space for scientific exploration, he focused increasing attention on the public role of science and on the scientist's obligation to the public. In 1984, with Frederick Seitz and William Nierenberg, he cofounded the George C. Marshall Institute, a think tank in Washington, DC; through it, he sought to influence public policy by analyzing related, underlying scientific issues.

Jastrow's philosophy was that researchers supported by government and private institutions owe their patrons the proceeds of that research—not only the application of space technology to everyday needs but also the information acquired about Earth, the solar system, and the cosmos. He believed that science is a part of our culture, to be appreciated in its own right, like music, art, and sports. That belief kept Jastrow connecting with the public—through a dozen books, numerous magazine articles, and more than a hundred TV appearances.

Robert Jastrow was a scientist, an educator, an author, and a public speaker, who took advantage of a new technology—the ability to actively probe space—to advance science, to advance our culture, and to help bring the benefits of that technology to humankind.
Posted by Mercury at 4:20 PM

Email ThisBlogThis!Share to TwitterShare to FacebookShare to Pinterest
Labels: for scientific, physics