Eyes on the "prize"...Nobel that is 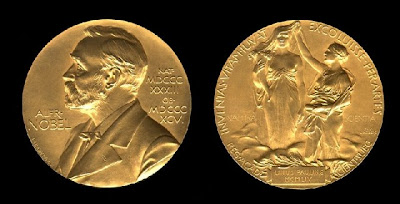 Some advice from a former Nobel laureate...Douglas Osheroff. It would be a mistake and poor science if the Nobel Prize were the sole goal in scientific research. Osheroff does offer some advice and certainly understands that scientific achievement may be focused on one or two individuals but that there is an army of supporting individuals.

physicsworld.com
Douglas Osheroff was one of 19 Nobel-prize-winning physicists who attended a meeting in Germany last month that played host to over 550 of the world’s most promising young researchers. He gives Matthew Chalmers his tips for would-be Nobel laureates of the future.

Before 1996 Douglas Osheroff did not know much about the picturesque island of Lindau on Lake Constance in southern Germany. But that year he was awarded the Nobel Prize for Physics with David Lee and Robert Richardson for the discovery that helium-3 undergoes a dramatic change to a strange frictionless "superfluid" when cooled to below about 2 mK.

The following year, Osheroff was invited to attend the 47th meeting of Nobel laureates in Lindau — an annual event at which 20 or 30 laureates hold discussions with several hundred young researchers from around the world to help inspire the next generation of scientists. Osheroff has now attended this elite gathering five times, most recently last month. This year’s event was devoted to physics and was attended by 19 Nobel-prize winners, including particle physicist Carlo Rubbia, cosmologist George Smoot, and solid-state physicist Peter Gruünberg, who shared last year’s prize, along with five laureates from other disciplines.

Osheroff, who is based at Stanford University in the US, takes his role as a mentor very seriously. "Even before I won the prize, I spent a lot of time giving talks to students," he told Physics World shortly after emerging from one of the meeting's press conferences. But after receiving his Nobel prize, he soon found himself more in demand than ever. Osheroff estimates that he started flying about 120,000 miles annually after winning his prize; now, he says, he is clocking up more like 150,000 miles a year.

Like many Nobel laureates, Osheroff has found that winning the prize offers a platform from which to tackle issues that lie beyond the research lab. "As a laureate, I have an ability to say something that will have more impact than it probably deserves," he says. Osheroff has taken a particular interest in global warming, having spoken out on the topic during the 2004 US presidential election, although he admits it is ironic that his extensive travelling has given him a pretty large carbon footprint.

Osheroff spoke about climate change when he was last in Lindau in 2005 and this year he took part in a panel discussion about the subject. But he attended the event first and foremost to meet the 567 young researchers who had been selected from about 21,000 applicants from 66 nations (15,000 of whom were from India and China alone). "It's mostly a matter of talking to students, getting them stimulated and giving them as much good advice as you can about careers in physics," he says when asked what he hopes to achieve by attending.

In previous years, Osheroff has talked about his role in the panel set up to investigate the 2003 space shuttle Columbia disaster and his discovery of superfluidity in helium-3. Superfluids are quantum-mechanical states of matter that have zero viscosity and can therefore do strange things like flow up hill. This year, however, he discussed strategies that he thinks are key to making Nobel-prize-calibre discoveries in physics. "By their very nature, those discoveries that most change the way we think about nature cannot be anticipated, so I take a historical approach and review what made certain discoveries possible."

He starts with the example of the Dutch physicist Heike Kamerlingh Onnes, who won the 1913 Nobel prize for his investigations into the properties of matter at low temperatures. Having been beaten by the Scottish physicist James Dewar in the race to liquefy hydrogen gas, Onnes managed to liquefy helium by chilling it to below about 4.2 K. This achievement, which took place 100 years ago last month, was a feat in itself, but Onnes then tried to cool the helium further to see if it would solidify.

After two whole years he eventually reached the unprecedented temperature of 1.04 K, but the helium refused to budge from its liquid state. "This is no wonder," says Osheroff. "I personally have cooled helium to 0.0001 K and it stays happily as a liquid." Instead of quitting, Osheroff explains how Onnes looked around for other interesting questions that could be tackled using the cryostat he had built.

With physicists at the time debating how the electric conductivity of metals would change when cooled to near absolute zero, Onnes secured a pure sample of mercury and told one of his students to find out what would happen in this regime. They discovered by accident that the conductivity almost vanished at about 4 K, making this the first observation of superconductivity — the flow of electric current without resistance. The moral, says Osheroff, is that a failure in experimental science may be an invitation to try something new that ends up reaping big rewards.

But there is more to the story. Although Onnes had probably cooled his cryostat below 2.17 K hundreds of times during his lifetime, it was not until 1938 that the Soviet physicist Peter Kapitza in Moscow, along with the Canadian researchers Jack Allen and Donald Misener at Cambridge in the UK, discovered that below this temperature the helium becomes a superfluid. Kapitza shared one-half of the 1978 Nobel prize for the finding, although it is still not clear why Allen and Misener were not recognized....

As Osheroff points out, Onnes had even remarked that at about 2 K the liquid helium in his apparatus ceased to boil, but he never went back to try to understand what the origin of this behaviour was. So the lesson this time, according to Osheroff, is to always be aware of unexplained behaviour. "Nature usually doesn’t knock with a loud bang," he says. "She whispers very softly."

Based on his forays into the history of physics, Osheroff does not think there is much point in trying to direct fundamental research for specific applications — as governments often like to try and do. He cites the example of nuclear magnetic resonance (NMR), which underpins the now widespread medical technique of magnetic resonance imagining (MRI). Felix Bloch and Edward Purcell developed NMR independently in 1946 in order to study the charge distribution of atomic nuclei, for which they shared the Nobel Prize for Physics six years later.

NMR has since won a further three Nobel prizes, not only in physics but also in chemistry and in physiology or medicine, and Osheroff thinks it will quite possibly win a fifth for functional MRI, which allows the activity in the brain to be monitored in real time. "If you say ‘Oh my god, we need some way of monitoring brain function non-invasively' and set out to do so without knowing anything about NMR, it just would never have happened," he says.

Osheroff’s third message for young researchers echoes a famous quote attributed to Newton: if I can see further than anyone else, it is because I have stood on the shoulders of giants. He cautions that it is wrong to think of advances as being made by brilliant individuals in isolation and that, in reality, progress almost invariably results from the scientific community asking questions, developing new technologies and sharing the results. "I show a picture of my apparatus and put the names of scientists whose contributions were essential in making the discovery I made, such as Purcell. There are 14 names up there, but I could easily have put up twice that number."

Osheroff also uses the discovery of the cosmic background radiation by Arno Penzias and Robert Wilson, who shared the other half of the 1978 Nobel prize, to highlight the importance of fully understanding your experimental equipment. The pair only realized the origin of the very weak signal being picked up by their giant horn-shaped receiver when they had ruled out every other explanation — including the possibility that the noise was from pigeon droppings.

Osheroff offers one final piece of advice for students wishing to make a breakthrough in experimental physics: avoid too many commitments, particularly those that require you to be out of the lab at fixed times. "You've got to sometimes back off from what you're doing to make you a better researcher, but language lessons or dance classes are not advisable," he says. "Research does not adhere to a schedule."

NOVA's "Absolute Zero"
Posted by Mercury at 7:02 AM