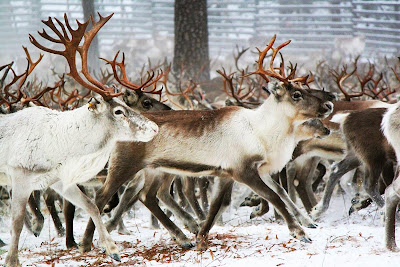 "Rudolph the Red-Nosed Cash Cow: Inside the Economics of Reindeer Farming"

The population of reindeer is plunging. Demand to rent them at Christmas is surging. But what's an owner to do with them the other 11 months out of the year?

A lot of people assume that reindeer, just like Santa Claus, are make believe. But the antlered stars of Christmas stories such as Rudolph the Red-Nosed Reindeer and the Santa Claus movie are real animals—that bring in real business. Renting reindeer for an hour for, say, the company Christmas party typically costs several hundreds of dollars; their day rate is several times that.

Some economics are at play: supply is dwindling as demand is growing, especially at this time of year. The number of Canadian reindeer and caribou has plunged 81% in a decade. The global reindeer population has fallen too, as humans encroach on their lands. In the US, some farmers have ceased showing their reindeer in the face of growing regulations and disease management rules.

Yet reindeer rental owners “are as busy as they can possibly be,” says Cindy Murdoch, a board member of the Reindeer Owners and Breeders Association. She’s also the owner of Timberview Farms in Oregon, which—like the original St. Nick—has a fleet of eight reindeer. “We have double, triple bookings to meet needs,” Murdoch says.

The marketing power of antlers

Reindeer are run ragged during the holidays as an attraction to bring in customers, or as a part of a winter festival or special event. Their novelty to adults and children alike helps their marketability. According to data from various reindeer farm websites, a pair of reindeer may rent for $200 to $300 or more an hour; Timberview rents reindeer for a minimum of $1,750 for an eight-hour day.

The main difference between a deer and a reindeer is reindeer have thicker fur and wider hooves that are designed for snow, while deer have thinner legs and dainty hooves. Both male and female reindeer grow antlers, while only male deer get pointed headpieces. Domesticated in northern Europe and Asia about 2,000 years ago, reindeer were almost certainly among the first domestic hoofed animals, according to some experts. But they are not as fast as horses.

Close cousins of caribou, they live in the tundra and start to grow winter coats in October. By December, the older males’ antlers fall off, while the females and calves keep theirs. Some owners specially treat male reindeer to preserve their antlers through Christmas so they’re ready to trot out.

“They’ve got this magical quality—big eyes, soft noses,” says Angie Flint, who says her rural England reindeer business has seen a double-digit increase in revenues; one of hers made an appearance at a holiday party for the prime minister in 2011.

Reindeer often serve as backdrops for holiday cards and photos— and sometimes, as spies for Santa. Murdoch tells boisterous children: “Dasher’s watching you and she’s the one who reports back. So you should be quiet and good so you get on the good list.”

Despite being curious, gentle and quite social, reindeer are also fairly sedentary. “They lie around most of the day,” says Murdoch, who has raised them for 13 years.  If  trained early and given proper cues from a herd leader or trainer, reindeer behave more like horses than lions or gazelles.

The best way to avoid a “National Geographic moment” in which the reindeer antlers clash and they fight for dominance, she said,  is to observe which ones mingle well in the fields—and then pair them together in public.

Still, many owners insist the animals stay in enclosed pens when they are taken out to events or as business promotions, since their sharp and pointed antlers can inadvertently prove dangerous. Only the well-trained reindeer can be guided through crowds on a harness or pose for photos at annual events.  Stress-free handling is important, owners say.

Some farmers have found ways to extend their reindeer rentals to other times of year. Crystal Collection Reindeer, a farm that’s been around for 20 years, has had Christmas in July events and brought its animals out to Halloween celebrations.  George Agilar in Alaska leases many of his 18 reindeer to a tourist attraction called Riverboat Discovery for four or five summer months.

“That definitely helps pay the feed bill,” said Aguiar, who also works as a University of Alaska research assistant on animal health and using reindeer as meat.  He used to view doing the “Santa thing” with your reindeer as a sign of selling out. So none of them have Christmas-y names; instead they’re named after friends: Dave, Willie, and Flea, for her small size.

“Now I realize I have to take advantage of those opportunities” to earn money, he said. He’s starting to work on plans for agritourism. In the last year, he even bought a couple of old sleighs and is training one reindeer to pull them.

“I want the reindeer to tow me on skis,” he said, noting that it’s taking quite a lot of training to perfect. It’s called skijor and in Finland, Norway and other countries, skijoring is an amateur or competitive winter sport. (In some places, horses or dogs are used instead of reindeer.)  Some tourist destinations in Norway now offer this to guests.
Posted by Mercury at 8:00 AM