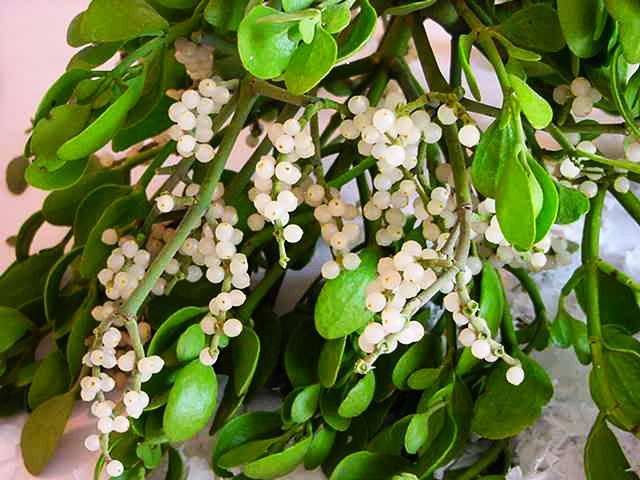 "Why do we kiss under the mistletoe?"

Because it remains green year round, this parasitic plant has long been associated with fertility.

To the best of my knowledge, I never saw live mistletoe until after relocating to Europe. But the leafless trees in Germany make it plain that mistletoe is everywhere here.

European mistletoe, Viscum album, is native to Europe and Great Britain. It is a parasitic plant that obtains water and minerals from trees and shrubs. Its waxy white berries are toxic to humans, but several bird species certainly enjoy eating them and do so with impunity. The berries are coated with a sticky substance containing mucopolysaccharides and strands of cellulose. This adhesive, known as viscin, sticks the seed to a new host plant after a bird has wiped it from its beak or eaten it.

So why do we have a tradition of kissing under mistletoe?

Since mistletoe remains green throughout the year, many ancient peoples have ascribed these plants with magical healing powers and with fertility, and some cultures viewed it as an aphrodisiac due to the suggestive arrangement of its berries. Apparently, the association between mistletoe and fertility made it a traditional addition ancient Greek myths, where the custom of kissing under mistletoe may have started. This practice was later extended to wedding ceremonies.

Victorian England seems to have adopted this tradition, too. For example, if a girl refused a kiss whilst standing under mistletoe, it was said that she wouldn't receive any marriage proposals during the following year. Worse, it seems that many people would avoid her since they believed she would probably end up an old maid -- as if this was such a bad thing!

Interestingly, there is a proper etiquette for kissing under the mistletoe: first, the man can only kiss a woman or girl on the cheek and second, when he does so, he removes one berry from the mistletoe sprig. After all the berries are gone, the kissing ends, too.

Here's Fred Rumsey, the Botany Enquiries Officer at the Natural History Museum, musing upon the charms of mistletoe: