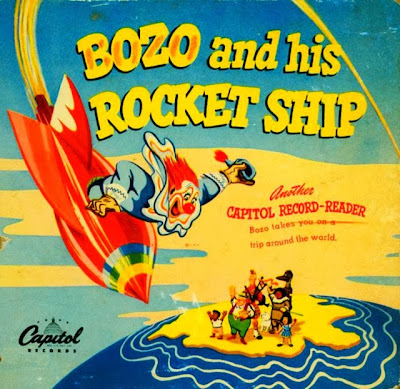 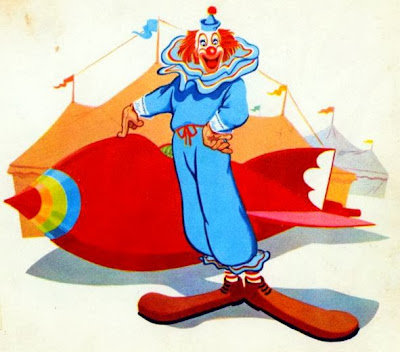 "Probably the Most Racist Rocket Trip Ever"

Back in the late 40s, Bozo the Clown was hot stuff. He was the star of a lot of kids' books, including one about an amazing rocket. Unfortunately, this futuristic story was also amazingly racist.

The Bozo character was originally created by Alan Livingston for a series of children's books that combined words and pictures with a recorded story and music. The voice of Bozo was played by Pinto Colvig. Bozo eventually became so popular he became the official mascot for Capital Records. He became a TV star in 1949, with Colvig again playing Bozo. Larry Harmon bought the rights to the character in 1956 and immediately franchised the clown to TV stations coast-to-coast. Harmon's genius lay in his realization that anyone could play Bozo and the kids wouldn't know the difference.

Among titles like "Bozo's Jungle Jingles," "Bozo at the Circus," and "Bozo and the Birds," we have "Bozo and his Rocket Ship."

The story starts off with Bozo proudly showing off his brand-new rocket.

I'm going to take you on a trip around the world

In my new sky-rocket ship!"

And sure enough, he does. Things start off pretty well, with visits to Scotland, where everyone wears kilts, Switzerland, where everyone makes cuckoo clocks, and France, where a cute little French girl shows Bozo the Eiffel Tower and sings "Frere Jacques" for him.

He even makes a stop in Brazil, where a little barefoot kid has his parrot ask for crackers in Portuguese.

Bozo's visit to Greenland is just a forewarning, when the Eskimo he meets there explains in broken English, "Me Eskimo. My house is called an Igloo. It is made of ice. Dog pull me over snow in sled." The Eskimo urges Bozo to see some of the other wonders of Greenland. "You go in rocket ship to see big Walrus. He live in Greenland too. Dog say, 'Walrus big funny face!'"

On his next stop, Bozo tells his little readers,

"Here we are in China!

I think I'll take a ride in this carriage.

It is called a 'jinrickishaw'—-

Well, what are we waiting for, China Boy?"

Bozo finally stops in Africa. This is the text as it appears in the book:

Bozo: This is Africa! Hear the jungle drums?

And look at this funny fellow!

What happened to your lips, mister?

All men and women in tribe

I pull it bigger for you—-

I put plate inside lips now—-