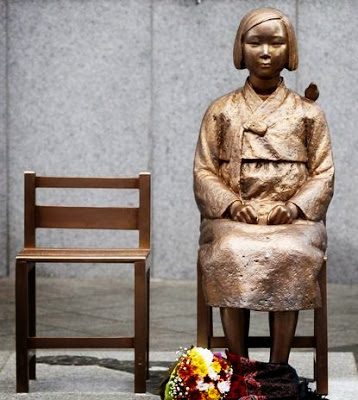 Does this involve political correctness or finger pointing for an admitted practice that the Japanese would rather forget? An assuagement of male combatants' horrors of war is morally unacceptable--but it did happen and probably still happens.

Three members of Japan's House of Representatives called on Glendale to remove an 1,100-pound statue honoring an estimated 80,000 to 200,000 "comfort women" from Korea, China and other countries who were forced into prostitution by the Japanese army during World War II.

The trio, Mio Sugita of the Hyogo Prefecture, Yuzuru Nishida of Chiba, and Hiromu Nakamaru of Hiroshima, are members of the Japan Restoration Party, a 1-year-old conservative political party that prefers a smaller central government, tax cuts and a hard-line approach to national security.

The group was on a two-day study mission in the Los Angeles area regarding the controversial memorial in Glendale's Central Park, the Glendale News-Press reported.

The group shared their perspectives on Tuesday through a translator, Koichi Mera, the president of the Study Group for Japan's Rebirth, an organization based in Los Angeles, at a downtown Los Angeles hotel.

"The news that the statue was installed made a big noise in Japan," Nishida said, as it describes the women as sex slaves. "That hurts Japan's honor."

Glendale erected the roughly $30,000 statue, which was paid for by Korean groups, in July, and a wave of controversy followed. City officials received thousands of letters from Japanese nationals and Japanese Americans opposing the statue.

Many former comfort women have publicly shared disturbing stories of their servitude and the Japanese Ministry of Foreign Affairs says on its website that some women based in war-area brothels were "deprived of their freedom and had to endure misery."

But statue opponents, including the three Japanese politicians, say the women acted willingly and claim the estimated number of comfort women is greatly inflated.

In addition to calling for the Glendale statue's removal, the Japanese politicians also said they wanted the Japanese Ministry of Foreign Affairs to revise its account of the comfort women system and for their colleagues in Parliament to retract an apology to comfort women made by Japanese officials in the 1990s.

The politicians' party holds a handful of seats in Japan's upper and lower houses of the National Diet and it's unclear how much traction their requests would actually receive. Their ideas have yet to be debated in open session, the representatives said.

As the politicians aim to change Japanese policy regarding comfort women, Korean American lobbyists are working on installing more statues in the U.S. to increase awareness about the history of the women as well as encourage the Japanese government to pen an official resolution of apology.

The politicians visited the statue in Glendale, which features a young woman in Korean dress sitting next to an empty chair, and met with Japanese Americans to discuss the "comfort women" issue during their trip.

They met with a Japanese veteran who opposed a similar statue proposed in Buena Park—which failed to gain support from the City Council there—as well as two Japanese American groups that supported the statue, Nikkei for Civil Rights & Redress and the San Fernando Valley Japanese American Citizens League.

"They wanted to say this is an issue for Japan, that it's not an international issue, but that's not the way the rest of the world is looking at it," Kathy Masaoka, co-chair of Nikkei for Civil Rights & Redress, said during a phone interview after their meeting. "It's too late for that."
Masaoka said she was concerned that the controversy will not be resolved if Japanese politicians continue to oppose increasing awareness of "comfort women."

Although Glendale Mayor Dave Weaver has said he regretted that the city installed the statue, four other members of the City Council said they continue to support it and don't plan to remove it.
Posted by Mercury at 2:48 PM