Harry May and Alpha the robot...sort of 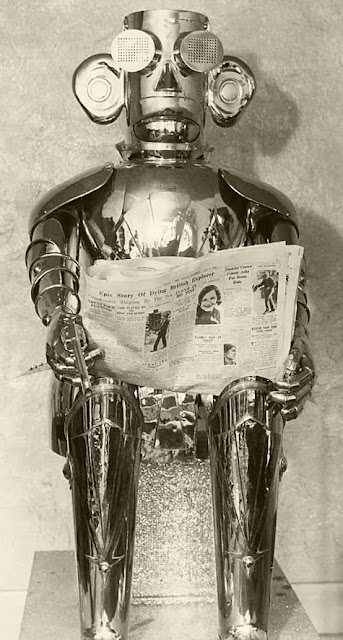 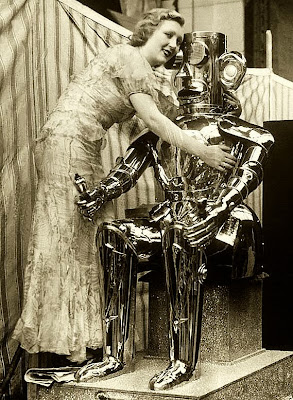 Last week Alpha, the robot, made its first public appearance in the U. S. One of the most ingenious automatons ever contrived by man, a grim and gleaming monster 6 ft. 4 in. tall, the robot was brought to Manhattan by its owner-inventor-impresario, Professor Harry May of London, and installed on the fifth floor of R. H. Macy & Co.'s department store. Encased from head to foot in chromium-plated steel armor, Alpha sat on a specially constructed dais with its cumbrous feet securely bolted to the floor, stared impassively over the knot of newshawks and store officials waiting for the first demonstration. The creature had a great sullen slit of a mouth, vast protuberant eyes, shaggy curls of rolled metal. In one mailed fist Alpha clutched a revolver.

Professor May, a dapper, blond, beak-nosed man in his middle thirties, signaled his assistant who drew a curtain behind the stage, revealing the massive control cabinets to which the robot was wired.

Said the crisp British voice of Professor May: "Wake up!"

The eyes of the automaton glowed red.

The robot clicked and whirred. Pivoting at knees and waist, it slowly stood up.

When commanded, the robot lowered its arm, raised the other, lowered it, turned its head from side to side, opened and closed its prognathous jaw, sat down. Then Impresario May asked Alpha a question:

From the robot's interior a cavernous Cockney voice responded:

May: What do you weigh?

A dozen other questions and answers followed, some elaborately facetious. When May inquired what the automaton liked to eat, it responded with a minute-long discourse on the virtues of toast made with Macy's automatic electric toaster. Finally when May requested the creature to raise its arm and fire the pistol, the arm went up, the metal forefinger pulled the trigger, the firing-pin fell with a click. Professor May explained that store officials would not permit him to use blank cartridges.

Alpha's master asked his auditors to give any of his questions and commands, using exactly the same words. Sometimes the robot responded promptly, sometimes not until Professor May repeated the words.

For such pictures as King Kong Hollywood has devised automatons capable of more complex movements than Alpha, but never one that responded to the human voice. Anxious to avoid any suspicion of ventriloquism or of a hidden assistant pushing control buttons, Professor May removed the robot's breast plate, disclosing a mechanism like the interior of an ordinary radio. Publicly he explained that Alpha's repertory of answers consisted of 20 or 30 recordings on wax cylinders, as in oldtime phonographs, which were run off in the control cabinets and reproduced from the loud speaker in the robot's chest. Alpha cannot really understand language, but he can respond to a variety of set questions the answers to which have been prepared in advance.

Privately Professor May explained more. Heart of the robot system is an ordinary cathode-ray oscillograph, an electronic device which, when voice modulations are converted into electrical impulses as in a telephone, makes a jagged up-and-down record of them. Since different voices are differently pitched the device is rigged to ignore absolute pitch but to respond to relative pitch variations which occur in sequence in certain word combinations as pronounced by most speakers. Different combinations of variations close different combinations of relay circuits, and each combination of circuits is hooked up to the appropriate wax cylinder which supplies the answer, or to the proper motor which moves the robot as directed. Thus Alpha may answer "Seven" when asked "How many days in the week?" but remains dumb if the question is phrased "A week has how many days?"

Alpha was not quite correct in giving its age as 14. Professor May, a clever free-lance experimenter in electronics who is now working on voice-operated safes for banks, conceived Alpha 14 years ago but did not endow the robot with its present versatility until last year. He says it is now foolproof although it has not always been so. Once it fired its pistol without warning, blasting the skin off the professor's arm from wrist to elbow. Another time it lowered its arm unexpectedly, struck an assistant on the shoulder, bruised him so badly that he was hospitalized. 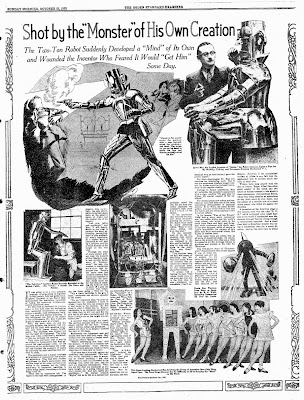 During the autumn of 1932 a group of curious onlookers assembled in Brighton, England to see inventor Harry May's latest invention, Alpha the robot. The mechanical man was controlled by verbal commands and sat in a chair silently while May carefully placed a gun in Alpha's hand. May then walked across the room to set up a target for the robot to shoot.

Seemingly more man than machine, and without a word from its inventor, the robot rose to its feet. May commanded the two-ton robot to sit, but instead it took a step forward. As the machine slowly raised the pistol, women in the audience screamed and men shouted warnings to the inventor. May commanded the robot to stop. "Drop that gun and sit down!" he screamed to no effect. Naturally, the inventor rose his hand to defend himself. Alpha the robot squeezed the trigger and in one quick, violent moment the discharged bullet pierced flesh and shattered the bones in May's hand.

The robot stood motionless, its arm outstretched with the smoking gun. May's voice could be heard, again desperately attempting to command the robot, "Back to your chair, Alpha! And drop that gun!"

This time, to everyone's amazement, the robot obeyed its master's command. The gun fell to the floor and the robot returned to its chair.

As a doctor tended to May, the inventor calmly explained, "I always had a feeling that Alpha would turn on me some day, but this is the first time he ever disobeyed my commands. I can't understand why he fired before I gave the proper signal."

Newspapers across the United States took this story and ran with it. An editorial from a Louisiana newspaper even proclaimed that the era of Mary Shelley's Frankenstein was upon us. The bold new world of automation was to be feared. Mechanical men of our own creation were sure to destroy us all.

With the benefit of hindsight we can say that this series of events never happened, or were at the very least, wildly exaggerated. A much tamer version of the story was reported in far fewer newspapers, (just one by my count), but still contained the sensationalistic headline, "Maker Is Shot by Robot He Invented." In this version of the story May was inserting a cartridge into the gun, which was attached to the robot, and an accidental, premature discharge simply burned the inventor's hand.

Such fantastic feats ascribed to robots are so obviously absurd to today's skeptical minds. Robotic machines are just now beginning to complete the most basic tasks of walking up stairs, slowly running, and "recognizing" faces. Such autonomous movement, as described in the story of Alpha turning on its inventor, is only recently beginning to be seen in robots being developed by Honda, Toyota and in elite universities around the world.

But why did these articles run in so many newspapers across the country? Why were people apt to believe that a "robot," or "mechanical man" would develop a mind of its own and turn on its inventor?

The 1930s was an era of dread. The Great Depression had ravaged the nation economically, physically and emotionally. The fear of automation manifested itself in sensational pieces throughout various popular media about the invasion of the machine. Comic books, radio dramas and newspaper articles fueled the fire, and allowed the nation to point to something, anything. Robots, technology, automation, they were the cause of our distress. 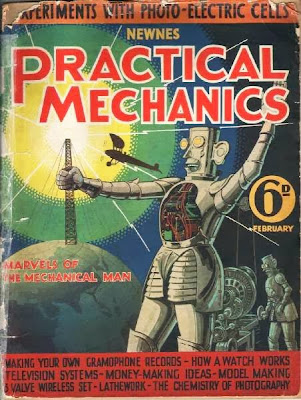 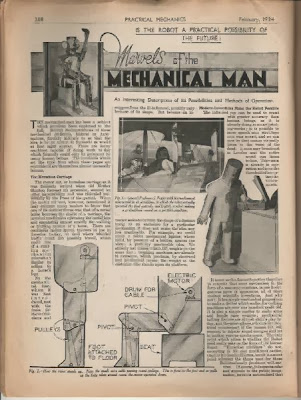 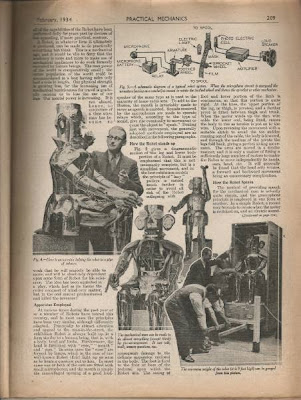 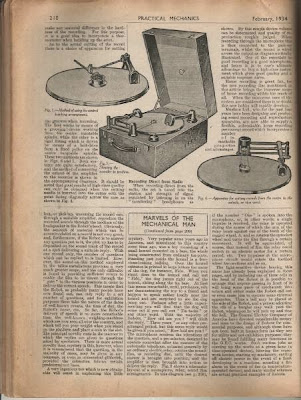 Assorted robots
Posted by Mercury at 7:29 AM