Jade Rabbit has landed on the Moon 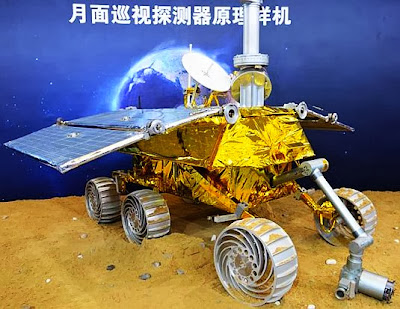 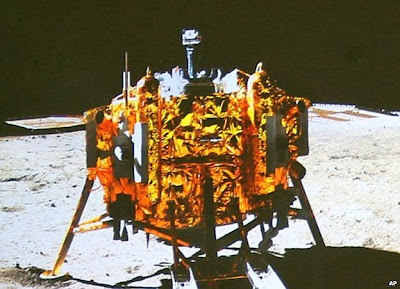 The first robot to land on the Moon in nearly 40 years, China's Jade Rabbit rover, has begun sending back photos, with shots of its lunar lander.

Jade Rabbit rolled down a ramp lowered by the lander and on to the volcanic plain known as Sinus Iridum at 04:35 Beijing time on Saturday (20:35 GMT).

It moved to a spot a few metres away, its historic short journey recorded by the lander.

On Sunday evening the two machines began photographing each other.

A Chinese flag is clearly visible on the Jade Rabbit as it stands deployed on the Moon's surface.

The first soft landing on the Moon since 1976 is the latest step in China's ambitious space programme, says BBC science reporter Paul Rincon.

The lander will operate there for a year, while the rover is expected to work for some three months.

The Chang'e-3 mission landed some 12 days after being launched atop a Chinese-developed Long March 3B rocket from Xichang in the country's south.

The official Xinhua news service reported that the lander began its descent on Saturday just after 1300 GMT, touching down in Sinus Iridum (the Bay of Rainbows) 11 minutes later.

"I was lucky enough to see a prototype rover in Shanghai a few years ago - it's a wonderful technological achievement to have landed," Prof Andrew Coates, from UCL's Mullard Space Science Laboratory, told BBC News.

Chang'e-3 is the third unmanned rover mission to touch down on the lunar surface, and the first to go there in more than 40 years. The last was an 840kg (1,900lb) Soviet vehicle known as Lunokhod-2, which was kept warm by polonium-210.

But the six-wheeled Chinese vehicle carries a more sophisticated payload, including ground-penetrating radar which will gather measurements of the lunar soil and crust.

Its name - chosen in an online poll of 3.4 million voters - derives from an ancient Chinese myth about a rabbit living on the moon as the pet of the lunar goddess Chang'e.

The rover and lander are powered by solar panels but some sources suggest they also carry radioisotope heating units (RHUs), containing plutonium-238 to keep them warm during the cold lunar night.

According to Chinese space scientists, the mission is designed to test new technologies, gather scientific data and build intellectual expertise. It will also scout valuable mineral resources that could one day be mined.

"China's lunar programme is an important component of mankind's activities to explore [the] peaceful use of space," Sun Huixian, a space engineer with the Chinese lunar programme, told Xinhua.

After this, a mission to bring samples of lunar soil back to Earth is planned for 2017. And this may set the stage for further robotic missions, and - perhaps - a crewed lunar mission in the 2020s.

Dean Cheng, a senior research fellow at the Heritage Foundation, a conservative think-tank in Washington DC, said China's space programme was a good fit with China's concept of "comprehensive national power". This might be described as a measure of a state's all-round capabilities.

But he said that China did not see itself as being in a "space race" with anyone else. "I'm comparing it specifically to how the US and the Soviets were behaving in the late 1950s and 1960s when you had space launches almost every month.

"Look at how often the Chinese do manned missions - it's almost every other year."
Instead, the country is methodically and patiently building up the key elements needed for an advanced space programme - from launchers to manned missions in Earth orbit to unmanned planetary craft - and it is investing heavily.

Mr Cheng added: "China is saying: 'We are doing something that only two other countries have done before - the US and the Soviet Union."

The landing site of Sinus Iridum is a flat volcanic plain, part of a larger feature known as Mare Imbrium that forms the right eye of the "Man in the Moon". 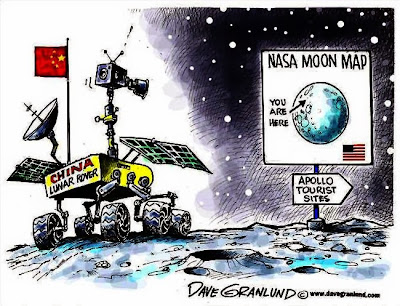