Lost book by Jules Verne..."Paris in the Twentieth Century" 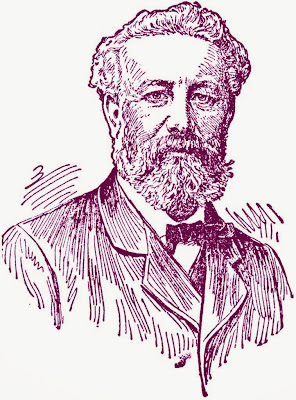 Before he wrote Twenty Thousand Leagues Under the Sea, Journey to the Center of the Earth or Around the World in Eighty Days, Jules Verne wrote a short novel about Michel Dufrenoy living in Paris in the Twentieth Century. This novel was written in 1863, the same year that saw his first novel, Five Weeks in a Balloon published. Long believed lost, the manuscript for Paris in the Twentieth Century was discovered when Verne's great grandson opened a safe which had belonged to the French author. When Verne had first submitted the manuscript to his publisher, he was told that his vision of Paris in 1960 was too dismal and no one would believe the incredible suggestions he was making.

In point of fact, several of Verne's "predictions" wound up coming true. He extrapolated fax machines, elevated trains and automobiles among other technological marvels. Perhaps even more interesting are his predictions that reading would decline and authors in the 1960s would eschew form for style, creating books which no one read, perhaps not even the author.

His world of the future is, in point of fact, the raison d'etre of the novel. Paris in the Twentieth Century is sadly lacking in plot as it follows our hapless hero around a Paris which recalls to the modern reader the Londons of Orwell's 1984 or Gilliam's Brazil. Awarded a Poetry Prize from the factory-like Academic Credit Union, Dufrenoy, an artistic dreamer, must go to work at his cousin's bank, where he is ineptly set to use a computer-like device. His inability to master the keystrokes causes him to be moved to another position where he meets another dreamer, the musician Quinsonnas, who introduces Dufrenoy to a small enclave of other Bohemian dreamers who have little place in the industrial/capitalist society which rules Paris.

Dufrenoy also finally has a chance meeting with his Uncle Huegenin, another dreamer, like Dufrenoy or Dufrenoy's father, the last great composer. Despite the wishes of his Uncle Stanislas Boutardin, who is looking after Dufrenoy's best interests, Dufrenoy strikes up a friendship with the uncle who is more closely akin to his own soul.

Written in Verne's style, the book is interesting, although, as he often did, Verne halts his (almost non-existent) plot to unload information on his reader. Each time a character is introduced, Verne explains the character's background and relationship to Dufrenoy, whether it is Stanislas Boutardin (1 1/2 pages of description) or Dufrenoy's professor's daughter Lucy (1/2 page). Yet for all that Verne describes these characters, the most interesting and realistic is Michel Dufrenoy, himself.

Dufrenoy is a stranger in his own land. Merely sixteen when he receives his Prize in Poetry from the Academic Credit Union, Dufrenoy is given a job for which is is totally unprepared. His desire to rebel against the strict regimen of the Casmodage and Co. Banking House is stifled by Paris's lack of any artistic outlet. His only way out is to allow his own inability to perform his job show itself, leaving himself without a position. Dufrenoy's understanding of Paris is nurtured by Boutardin, who desires Dufrenoy to become a part of Paris-as-it-is, and Huegenin & Quinsonnas, who try to help liberate Dufrenoy's artistic soul.

Recently, Evelyn Leeper commented that the idea of Jules Verne being eligible for a Hugo was an interesting thought. Paris in the Twentieth Century is certainly as good as several of the recent books which have won that honor. In light of last year's Hugo Winner, the Cyberpunk/Steampunk The Diamond Age, Jules Verne is the epitome of Steampunk. Looking over a list of 1996 books I own, Jules Verne's novel can definitely hold its own with some of the best.

If anyone has a doubt about Jules Verne's writing power, they should be advised to read Paris in the Twentieth Century immediately. The narrative flows smoothly, this strange Paris is evoked effortlessly, and the ending left me gasping in awe and envy. The book's package is simply gorgeous (artwork by Marc Burkhardt, design by Andy Carpenter), and the margins and print size nearly disguise how short the book is in reality. The blurbs on the dustjacket try and sell the book on its predictive powers, and while, yes, Verne does predict many of our technological advances, that is not the heart of the book. What is? A stinging critique of capitalism, and of the mechanistic worldview underlying progress, all delivered in the form of a strong story.

Paris in the Twentieth Century tells the story of Michel Dufrénoy, a young man who simply does not fit in. He wins a prize for Latin Composition and is roundly booed. He wants to be a writer in a world where writing (as Verne knows it) is dead. He gets a job in a bank, which doesn't last long. When moved on to another job in the bank, he meets Quinsonnas, a pianist who has given up on the old ways and wants to amaze the age. They become friends. Michel also meets his uncle, Huguenin, an eccentric old man with many old style books. At Huguenin's place, he meets Lucy, the daughter of Professor Richelot. Michel falls in love with Lucy, which, indirectly, causes him to lose him job at the bank. He takes up work at le Grand Entrepôt Dramatique (Great Dramatic Warehouse -- think of a nationalized Hollywood), but he is soon disillusioned and decides to venture out on his own as a writer. The ending follows inevitably from there.

We do not really sympathize with Michel Dufrénoy -- more often we condescend to him. He's a dreamy youth, timid at the wrong times (in love and in life), and quite naïve. So in some ways, he's the pawn that Verne sends out to get crushed by a heartless society. But we can understand his dreams, and his fate is still heartwrenching. The other characters are sketched quickly, and Lucy especially is a cipher, put in for plot reasons.

Is Paris in the Twentieth Century as prescient as the blurbs would have us believe? Yes, Verne predicts automobiles, the subway, convenience stores, fax machines, the electric chair, and so on. I can make a far larger list of things that he gets dead wrong -- Quinsonnas' job in the bank struck me as silly -- but the percentage of correct predictions is indeed higher than most science fiction novels. However, I would submit that this is irrelevant, and mostly just a way to fill up the dustjacket description with nice copy. Like this quotation from the inner front: "This astonishing book is comparable to Brave New World and 1984 in its chilling, dystopian view of a future world, and although it predates both novels by at least seventy years, its predictions are much closer to the truth." Big deal. The only reason any of these three books can be discussed together is the force of moral outrage shared by each, the desire to get people motivated to fight the system.

In fact, Verne's predictions, perhaps inevitably, are stuck firmly in his cultural biases. He makes quite a number of excellent projections as to where art (music, literature, painting) will go, and have indeed gone, but he writes them in order to horrify his audience. The irony is intensified when you consider that Verne's editor rejected the book as too unrealistic and pessimistic. For example, Verne mentions several times how dreadful a composer Wagner is, and then extrapolates into the twentieth century. Quinsonnas' piece, "After Thilorier -- A Grand Fantasy on the Liquefaction of Carbonic Acid," actually sounds far more interesting than anything Verne holds up as the idealized time before "sounds gradually gave way to noises whose musical value was no longer appreciable" (96). I also thought that the list of poem titles that Verne wants us to laugh at, and to think along with Michel that "[not] even this tiny amount of art had escaped the pernicious influence of the age" (42) were fascinating and filled with potential. Electric Harmonies could be a book of poetry by Ray Bradbury, Meditations on Oxygen could be about leaving Earth, Decarbonated Odes maybe a schlocky attack on advertising (these three titles are from page 41). Instead, Verne wants to slot music and literature into his general critique of the twentieth century -- it almost works too, except that what he considers a travesty is in fact a kind of flourishing. He needs the repressive society to get his tragic ending, but a more accurate prediction, if that is how we are going to start rating books, would be to have art thriving, subverting/celebrating its context.

Despite a few internal contradictions, and the misleading hype of the publisher, Paris in the Twentieth Century is indeed an important and excellent book. This book stretches Jules Verne's repertory and reputation, and most science fiction authors today could only dream of their books aging 130 years this well. What will Paris look like in the twenty-first century? Maybe there's another Verne manuscript lost somewhere.

Paris in the Twentieth Century [Wikipedia] 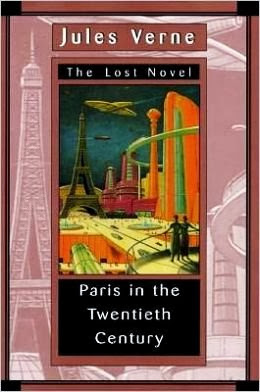 In 1863, Jules Verne was a young writer with one published novel under his belt and a new multibook contract with a prominent French publisher in hand. The publisher, however, rejected Verne's second manuscript, opting to bring out his Journey to the Center of the Earth instead. That manuscript apparently disappeared into a drawer, not to see the light of day again until it was rediscovered and published in 1994. Now it has been rendered into English by the eminent poet and translator Richard Howard. Verne's early books tend to feature adventure plots and a positive attitude towards technology. This novel, however, shows Verne in a darker, frankly dystopian mood. His mid-20th century Paris is an enormously wealthy society, a place of technological wonders, but, like Huxley's Brave New World, it is also a society without meaningful art. Engineering and banking are the prime industries of this civilization and, as the book's protagonist discovers, not even the most talented poet can find a place for himself unless he's willing to produce odes to blast furnaces or locomotives. While the narrative contains many startling predictions among them fax machines, electronic calculators, automobiles and elaborate subway systems there is little here in the way of either plot or character development. It's clear, in fact, that in opting for Journey to the Center of the Earth, Verne's publisher chose the better book.

Verne is well known as an early science fiction writer; this novel, which was lost for 125 years, is remarkably prescient in its predictions about the technology that is omnipresent now. Set in the 1960s, though written a century earlier, the novel depicts Michel Dufrenoy as a poet and humanities scholar at sea in a crass commercial world that has strong overtones of Soviet realism. He befriends a young musician with whom he works; reconnects with his long-lost uncle, a literature professor; and even falls in love with the professor's granddaughter. But despite the kindnesses of his friends, Michel fails to succeed with the technological culture around him. Notable are the predictions about the subway, electric lights, and electronic music. A curiosity; recommended for public and academic libraries.
Posted by Mercury at 3:38 PM