Get 'em while you can...those 60 and 40 watt incandescent bulbs 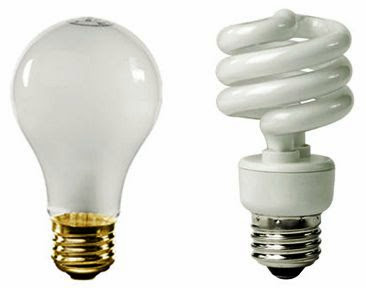 Frankly, I think they should stay. The generated heat and energy consumption may be a red herring. And consider the disposal of spent CFLs. Most will not recycle but just add them to the trash. They do contain mercury. Furthermore, there are many lamps that require the lampshade be attached to the bulb.

A plethora of more efficient lighting alternatives have hit store shelves in recent years. The bulbs cost more but eventually save money via lower energy bills.

The Thomas Edison era largely comes to an end Jan. 1 with the phaseout of America's most popular light bulb. Surprised? A survey out Thursday finds that most consumers are, and a third plan to stock up on the old incandescents before they fade away.

Three of five, or 59%, of Americans say they didn't know that the top-selling 60-watt bulb — plus the 40-watt version — will start disappearing from store shelves next year, according to the sixth annual "socket survey" by lighting company Osram Sylvania.

About twice as many respondents as last year — now 30% — say they plan to buy a lot of Edison's century-old incandescents wherever they're still available and continue using them rather than switching to more efficient alternatives, says the survey of 300 U.S. adults conducted last month.

"Some Americans are digging in. It takes people awhile to adjust," says Anne Guertin, Osram Sylvania spokeswoman. She notes, though, that two-thirds of those surveyed plan to switch, and 59% welcome the efficiency shift.

Sales are up for the old 60-watt and 40-watt bulbs, partly because of store promotions, says Mark Voykovic, national light bulb merchant for The Home Depot. He says his company's stores have put up more signs to educate shoppers about the phaseout.

The two bulbs, which account for about half of all standard-size bulb sales, are part of the U.S. government's multiyear phaseout of traditional incandescents, which began nationwide in January 2012 with the 100-watt. Last year, the phaseout extended to the 75-watt bulb.

The bulbs won't disappear overnight. A 2007 energy-efficiency law, signed by President George W. Bush, requires that as of Jan. 1 they no longer be made in or imported into the United States. Stores can finish selling their stock. Voykovic expects The Home Depot to have enough of the old bulbs to last through mid-2014.

Some stores are now stocking up so they have enough for shoppers who want to hoard them, says Terry McGowan, director of engineering at the American Lighting Association. He says hoarders, though, are a minority of shoppers.

The 2007 law requires light bulbs meet stricter efficiency standards. Old incandescents don't make the cut, because they waste 90% of their energy as heat rather than light — that's why they're so hot when in use. So companies have improved halogens — also incandescents — to meet the standards. The law exempts appliance, colored, three-way and other less commonly used incandescents.

Opposed to a government mandate, some members of Congress have tried to repeal the law or stop funding for its enforcement. Yet lighting companies have moved on, releasing a plethora of more efficient bulbs in recent years that offer warmer, incandescent-like light at steadily falling prices.

"We have witnessed more lighting innovation in the last five years than we have over the past 100," says Noah Horowitz, senior scientist at the Natural Resources Defense Council, an environmental group, acknowledging that the law served as catalyst. He points to incandescents that use 28% less energy as well as CFLs (compact fluorescent lamps) and LEDs (light emitting diodes) that use at least 75% less.

These alternatives still have much higher upfront costs, but the Department of Energy says customers quickly recoup the price difference in energy savings. Unlike the old incandescent, which last a year on average, CFLs can last 10, and LEDs up to 25.

"We're seeing a smooth transition," says Voykovic of the phaseout, adding that most shoppers will shift next year to halogen incandescents but eventually move to LEDs as their costs fall. Major lighting companies have debuted LED replacements for each of the incandescents being phased out, some retailing for about $10 a bulb.

"We're just at the beginning of where LEDs can go," says Nadav Malin, president of BuildingGreen, a company that researches energy-efficient products. He notes that LEDs aren't just replacing old incandescents but also are being placed inside furniture and wall panels. Last year, Philips Lighting debuted an LED system, known as "hue," that can be controlled by a smartphone or tablet.
Posted by Mercury at 2:11 PM