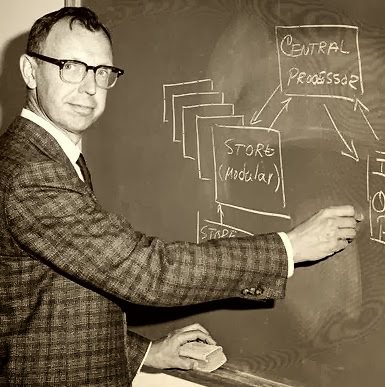 Willis H. Ware, an electrical engineer who in the late 1940s helped build a machine that would become a blueprint for computer design in the 20th century, and who later played an important role in defining the importance of personal privacy in the information age, died on Nov. 22 at his home in Santa Monica, Calif. He was 93.

His death was confirmed by his family.

Mr. Ware’s participation in a classified World War II project to identify friendly aircraft led the mathematician John von Neumann to recruit him to help develop a computer at the Institute for Advanced Study in Princeton, N.J., in 1946.

That machine was not the first digital computer, but it was based on a set of design ideas described by Dr. von Neumann that were broadly influential — first on the design of computers built by scientists around the world, and then on an early IBM computer known as the 701. Many of these concepts are still visible in the structure of modern computers and smartphones.

Mr. Ware, part of a small group of engineers working on that machine, was the first to try to engineer many of the components that would become vital to modern computers. His experience in designing high-speed electronic circuits during the war was essential to his work on the computer at the Institute for Advanced Study, said George Dyson, a historian of the project.

Mr. Ware, who worked at the RAND Corporation for more than 55 years, was one of the first people to gain a prescient view of the effect computers were having on society, in their impact on automation and the threats they posed to privacy.

“The computer will touch men everywhere and in every way, almost on a minute-to-minute basis,” he wrote in 1966. “Every man will communicate through a computer, whatever he does. It will change and reshape his life, modify his career and force him to accept a life of continuous change.”

While at RAND, Mr. Ware led an early Pentagon study exploring computer security. Afterward he was asked by the secretary of commerce, Elliot L. Richardson, to lead a committee to address “personal privacy” in the computer era. Some of its policy recommendations were adopted in the Privacy Act of 1974.

Among other problems, the committee dealt with the increasing reliance on “universal identifiers” like Social Security numbers.

“Willis Ware laid the foundation for modern privacy law,” Marc Rotenberg, executive director of the Electronic Privacy Information Center, said. “His insight was that in the computer age, organizations that collected private information would have to take responsibility, and individuals who gave up personal information would need to get rights.”

Willis Howard Ware was born in Atlantic City on Aug. 31, 1920, and developed an early passion for mechanical and electronic projects.

In an interview with the IEEE Computer Society in 2011, he traced his interest in engineering to a childhood observation. While riding his tricycle, he noticed that an older friend on a bicycle could pedal much faster than he could. He concluded that the lack of a chain on his trike was an obvious disadvantage.

Moving to Los Angeles, he worked for North American Aviation and joined RAND in 1952. There he managed the department where the engineer Paul Baran did early work on packet-switching, a technology that was the basis for the Internet.


"For the design of IAS and Johnniac computers"

Willis H. Ware (Ph.D., Princeton University, 1951) was a senior computer scientist emeritus with the RAND Corporation (1952-present) in Santa Monica, California with which he has held various staff and management positions. An electrical engineer, he has devoted his career to all aspects of computer technology -- hardware, software, architectures, software development, networks, federal agency and military applications, management of computer-intensive projects, public policy and legislation.

In the late 1960s he developed a research interest in the security of computer systems; and shortly thereafter, a corresponding interest in the personal privacy consequences of automated record-keeping systems. For 35 years he has written extensively on both topics, testified before Congress, been a prominent spokesman on the impact of computer technology on society and active professionally as speaker, conferee, and researcher.

His interests have turned to the vulnerabilities of highly automated and computerized information-oriented societies, and the technical and policy aspects of protecting their national information infrastructure.

In the late 1960s he chaired a Federal committee that created the first definitive discussion of computer security and treated it as both a technical matter and a policy issue. In the early 1970s he chaired a cabinet-level "HEW committee" whose report was the foundation for the United States Federal Privacy Act of 1974. Subsequently, President Gerald Ford appointed him to the Privacy Protection Study Commission whose report remains the most extensive examination of private sector record-keeping practices.

He has been the United States representative to IFIP's TC11 Committee on Security and Protection in Information Processing Systems, from 1984-present and was its Vice Chairman 1985-1994. In 1995 he received the IFIP Oustanding Service Award.

He chaired the (U.S.) Computer System Security and Privacy Advisory Board, a statutory body created by the Computer Security Act of 1987; it advises the United States government on societal impacts of computer technology and is involved with both information system security and cryptography.

Willis Ware [Wikipedia]
Posted by Mercury at 5:44 AM