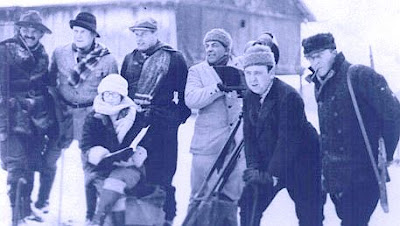 Alfred Hitchcock at work on The Mountain Eagle in Obergurgl.

The Mountain Eagle, the director's second work, was filmed in Obergurgl but disappeared 90 years ago

Afred Hitchcock arrived in the Tyrolean village of Obergurgl in October 1925, clad in knickerbockers, hiking boots and a felt hat, scouting for a location that resembled Kentucky. When he left several months later after completing his second film, the British-German co-production The Mountain Eagle, it's fairly safe to assume locals were glad to see the back of him.

Not only had he ordered the alpine meadows to be cleared of snow, caused a roof to collapse and become stricken by some sort of altitude sickness, he caused offence by declining to stay in the village inn and complaining about the guttural sound of their dialect.

Years later his sins have been forgiven, and now the Tyroleans are far more focused on what happened to the film, which, though released in 1927, has been considered lost for the best part of 90 years. Some fear it may have been destroyed because of its highly flammable nitrate base, but many still have faith that the picture, which has been ranked at the top of the British Film Institute's (BFI) "most wanted of the most wanted films", is still to be found in a fireproof safe or a film buff's attic.

Hopes were raised earlier this year by the discovery of 24 still photographs in the archive of one of Hitchcock's closest friends. The stunning shots were auctioned in Los Angeles earlier this month for $6,000 (£3,700).

Johannes Köck is among the hopefuls. "Wherever I go in the world talking to people from the film industry, I always appeal to them to go and look in their cellars, their attics, to call me any time of day or night if they find it," he says. The head of the Tyrolean film commission, CineTirol, whose job it is to lure filmmakers in search of dramatic alpine landscapes, Köck has been searching for the film since the celebrations of the centenary of Hitchcock's birth in 1999, when he first stumbled on evidence that the film was made in Obergurgl.

"Hitchcock came to this God-forsaken place simply on the basis of finding a postcard of the romantic Oberburgl landscape that he had picked up at a kiosk in Munich," he said.

Köck went to LA where he found Hitchcock's notebooks, in which he described in detail his gruelling journey from Munich to Obergurgl, first by train, then horse and cart, and finally on foot.

"Coming to Obergurgl then would be the equivalent today of heading to a village in the Himalayas – remote and without any modern transport or proper roads," says Köck.

The film project started rather inauspiciously, with Hitchcock waking up on the first day to find the meadows covered in snow. After waiting in vain for four days for it to thaw, he employed members of the local volunteer fire brigade to blast the snow away with their hoses. But in the process, a woman's roof was destroyed. The mayor demanded compensation from Hitchcock of one schilling, but he gave her two.

Filming was interrupted after Hitchcock suffered a bout of vomiting, which he later described as a physical reaction to his dislike of the guttural sounds of the Tyrolean dialect. Although he was a German speaker, he failed to understand the local tongue.

Such discomforts were somewhat offset by the bottle of Cointreau, a few bottles of whiskey and the lemons he had in his luggage. "Hitchcock had brought a whole sack of lemons with him, so at least he did not have to go without his favourite lemonade," says Köck.

It is though that the poor box-office success of the film, which was known in the US as Fear o' God and in German-speaking countries as Der Bergadler, may have had something to do with its obscure subject matter. Its plot revolved around a wicked father, a crippled son and a teacher. Both father and son fall in love with the teacher who flees to the mountains following the father's advances. A recluse falls in love with her, marries her, and there is a final showdown in which the father is accidentally shot.

Hitchcock was never happy with the film, referring to it in an interview with the French director François Truffaut as awful.

But fears that the picture – made years before Hitchcock's huge successes like Psycho, Vertigo and The Birds – might turn out to be disappointing have done nothing to deter cinephiles.

"Is it the great lost masterpiece?" asks Bryony Dixon, BFI's silent-film curator. "Probably not, but it's a Hitchcock, isn't it? So it would be sensational if it turned up."
Theories as to where it might be range from New Zealand, which in the 1920s was typically the last destination in the worldwide distribution chain, to Russia, where, as one belief goes, it may have ended up as war booty.

Yet experts are united on one aspect of the story: the Tyrolean landscape.

"That is its saving grace," says Dixon. "Hitchcock was very aware of the power of a good location, knowing that it sells your film for you."

It also helps Köck bring filmmakers to the region. "When they hear Hitchcock was here, their eyes often light up with delight," he says.

If the film ever turns up, Köck would love it to be shown in the now 400-strong community of Obergurgl, these days a buzzing ski resort.

"Then again, if it ever did turn up," he says, "it might be something of a disappointment that this beautiful, enduring mystery is no more."


Master of suspense and terror...Alfred Hitchcock's birthday
Posted by Mercury at 5:02 PM