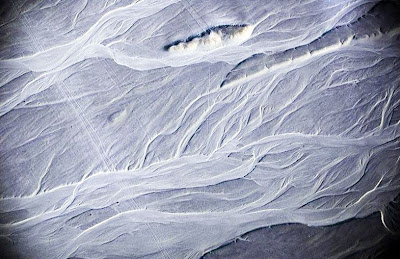 This aerial view shows the southern part of the labyrinth, including the central mound and the spiral that marks the 'outer' end.

Archaeologists gain insight into ancient desert drawings -- by walking them. The first findings of the most detailed study yet by two British archaeologists into the Nazca Lines -- enigmatic drawings created between 2,100 and 1,300 years ago in the Peruvian desert -- have been published in the latest issue of the journal Antiquity.

As part of a five-year investigation, Professor Clive Ruggles of the University of Leicester's School of Archaeology and Ancient History and Dr Nicholas Saunders of the University of Bristol's Department of Archaeology and Anthropology have walked 1,500 km of desert in southern Peru, tracing the lines and geometric figures created by the Nasca people between 100 BC and AD 700.

The confusing palimpsest of 'geoglyphs' -- desert drawings -- has attracted a host of theories purporting to explain them ever since they were discovered during the 1920s -- including the bizarre ideas of Erich Von Däniken who supposed they were made by visiting extra-terrestrials.

Professor Ruggles, Emeritus Professor of Archaeoastronomy at the University, and Dr Saunders combined the experience and knowledge gained by walking the lines with scientific data obtained from satellite digital mapping, studying the layering where designs are superimposed, and examining the associated pottery. The result is the most detailed such study to date.

In the midst of their study area is a unique labyrinth originally discovered by Ruggles when he spent a few days on the Nazca desert back in 1984. Its existence came as a complete surprise. Professor Ruggles recounts: "When I set out along the labyrinth from its centre, I didn't have the slightest idea of its true nature. Only gradually did I realize that here was a figure set out on a huge scale and still traceable, that it was clearly intended for walking, and that I was almost certainly the first person to have recognized it for what it was, and walked it from end to end, for some 1500 years. Factors beyond my control brought the 1984 expedition to an abrupt halt and it was only 20 years later that I eventually had the opportunity to return to Nazca, relocate the figure and study it fully."

Invisible in its entirety to the naked eye, the only way to become aware of the labyrinth is to walk its 4.4km length, experiencing a series of disorienting direction changes and other expected features.

As Professor Ruggles explains: "The labyrinth is completely hidden in the landscape, which is flat and virtually featureless. As you walk it, only the path stretching ahead of you is visible at any given point. Similarly, if you map it from the air its form makes no sense at all.

"But if you walk it, 'discovering' it as you go, you have a set of experiences that in many respects would have been the same for anyone walking it in the past. The ancient Nasca peoples created the geoglyphs, and used them, by walking on the ground. 'Sharing' some of those experiences by walking the lines ourselves is an important source of information that complements the 'hard' scientific and archaeological evidence and can really aid our attempts to make anthropological sense of it."

The arid conditions have ensured the remarkable preservation of Nazca's fragile geoglyphs for a millennium and a half. Nonetheless, segments of nearly all of the lines and figures -- including the labyrinth -- have been washed away by flash floods that occurred from time to time in the past. And, of course, people through the ages have walked across the desert plateau to cross from one valley to another.

Professor Ruggles and Dr Saunders have studied the integrity of many lines and figures within their 80km2 study area. Dr Saunders says: "Meandering and well-worn trans-desert pathways served functional purposes but they are quite different from the arrow-straight lines and geometric shapes which seem more likely to have had a spiritual and ritual purpose. It may be, we suggest, that the real importance of some of these desert drawings was in their creation rather than any subsequent physical use."

Certainly, the pristine state and well-preserved edges of the labyrinth suggest that it was never walked by more than a few people in single file. In fact, the survival of many geoglyphs seems remarkable given the proximity of the area to the pilgrimage centre of Cahuachi, in the nearby Nazca valley, and the fact that people carried on walking across the pampa during the ensuing centuries right up to modern times.

Even if the labyrinth was not unique when it was built, it may well be the only such construction whose integrity has been preserved to the extent that it still can be recognized in today's landscape. As Professor Ruggles observes: "Excavations commonly uncover objects undisturbed for centuries and even millennia. But it is hard to conceive many places on the planet were you could still "discover" a human construction that has lain hidden on the surface of the ground for as long as 1500 years, simply by walking along it and seeing where your feet take you."