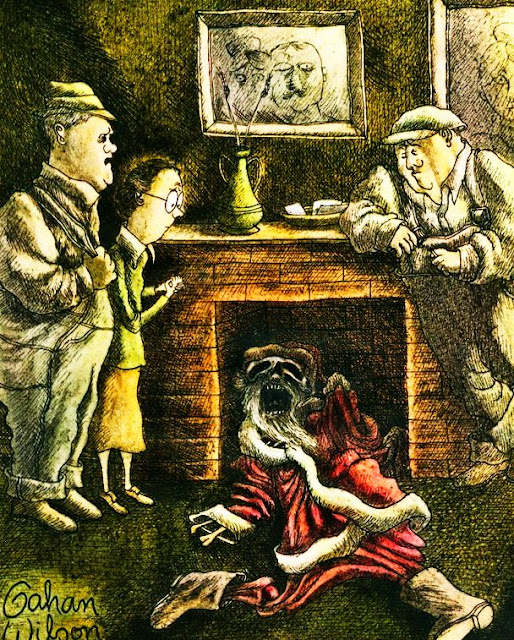 Emily Charlton, as a wide-eyed fourth grader, said she felt betrayed by her classmates on her elementary school playground during recess just before the holidays.

"It was a day or two before Christmas break so we were talking about what we had asked for and I remember saying at one point, 'Well I asked Santa for...' and everyone started laughing," said Charlton, now a 29-year-old waitress from San Diego. "I think they thought I was making a joke."

She stood her ground. "I remember feeling embarrassed and upset," said Charlton. "My belief, however, was unchanged."

But it got worse.

A few days later, she was at Toys "R" Us with her father and saw him pack a long, narrow box into the trunk. On Christmas morning, her younger sister opened up an electric keyboard from Santa in that same box.

Charlton ran to her mother for reassurance that what she suspected was wrong.

"I will never forget what came next," she said. "She looked at me, and without skipping a beat said, 'Don't tell your brother and sister.' I was devastated. … A huge bomb was dropped on me and as silly as it sounds, it really changed my life.

"The worst part of all was how unceremoniously it happened, it was like one minute I was a child full of wonderment, and in a flash was snapped into a world of non-believing, magic-less adults."

Parents aren't the only grinches this time of year.

In Ontario, Canada, this week a man walked along a Christmas parade route telling kids there is no Santa Claus, according to 24 Hours Vancouver. The 24-year-old, whose hair was gelled to look like horns, was arrested for intoxication and causing a disturbance.

And a news anchor in Chicago went on a rant against the jolly old man after a segment on holiday expectations and the bad economy, according to the Huffington Post.

"Stop trying to convince your kids that Santa is Santa," said Robin Robinson of Fox Chicago. "That's why they have these high expectations. They know you can't afford it, so what do they do? Just ask some man in a red suit. There is no Santa."
Robinson later apologized.

Of course the truth is inevitable, unless you are a logical middle-school child who has done a careful "cost-benefit analysis."

"I was one of those kids who stretched a belief in Santa for as long as possible, probably well past a point of willful ignorance," said Peter Dacey, a 27-year-old from Easton, Conn.

He had been the recipient of several "Christmas miracles." One was the "coolest space Lego out there," the working monorail, which he was convinced was too expensive for his parents to give him.

The other came right out of the "Miracle on 34th Street" playbook when his family was living in temporary housing, looking for a new home.

"All I wanted for Christmas was for us to find a house," said Dacey. "Strangely, that year I found a little box in the tree left for me that contained some random key. But it didn't seem so strange when I realized that it must be the key to our new home. I took it with me to the next few open houses we went to, and lo and behold, it fit in one."

In the end, it was a question of what reaped the most rewards.

"If you don't believe in Santa, no good comes of it, as either you're correct or you're not, in which case have fun forcing your parents to get you all your future Christmas gifts while Santa visits the believers," said Dacey. "On the other hand, if you do believe, the worst that can happen is that you find out you were wrong, and what's the harm there?"

To this day, Dacey said there is a part of him that "still believes," at least in the messages of love and giving.

But one parent -- now a grandmother who dresses up each year pretending to be an elf -- defended herself for bringing a dose of reality to her household when she was raising a family.

She was outraged when her 6-year-old son was sent to the principal's office for telling his first-grade class there was no Santa Claus.

"Man, was I mad about that," said Martha Chabinsky, a 59-year-old yoga teacher from Amherst, N.H. "Punishing a kid for telling the truth."

Simon's Cat and the Christmas tree
Posted by Mercury at 6:22 AM