A chuckle on philosophy--book review 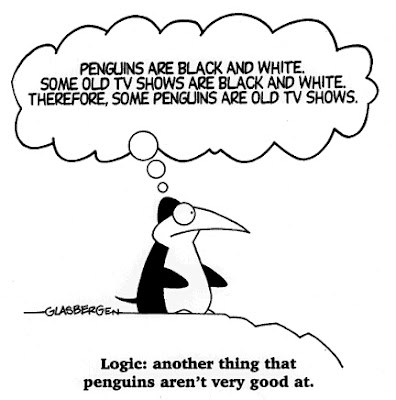 "Philosophy & Laughter: “Dead! Whatcha Gonna Do About it!”"

“So Heidegger and a hippo stroll up to the Pearly Gates and Saint Peter says, “Listen, we’ve only got room for one more today. So whoever of the two of you gives me the best answer to the question ‘What is the meaning of life?’ gets to come in.”

And Heidegger [by the way this is Martin Heidegger the German philosopher who tried to answer the question of “being”]  says, “ To think being itself explicitly requires disregarding Being to the extent that it is only grounded and interpreted in terms of beings and for beings as their ground, as in all metaphysics.”  But before the hippo can grunt one word, Saint Peter says to him, “Today’s your lucky day, Hippy!”

This is not a joke, which my own hands cooked, but one of the many jests created by Messrs Thomas Cathcart and Daniel of Klein, authors of “Heidegger and a Hippo Walk Through Those Pearly Gates: Using Philosophy (And Jokes!) to Explore Life. Death. The Afterlife. And Everything in Between.”  Yes, these are the same geniuses who wrote “Plato and a Platypus Walk through a Bar.” They will make you laugh your head off while exploring the heart of the Reaper (death), life and blablabla … You will love philosophy honey IF you laugh.

I found “Heidegger and Hippo” (2010) over the weekend at Beirut’s Virgin Megastore.

I bought it and spent the night reading it and laughing with the voices in my head (again, yes I might be a lunatic, this is a possibility). But believe me; these jokes will leave you wondering and speculating about questions we rarely think about.  All students, who think that taking a philosophy class is “boring,” and to all philosophy professors, who bore the pants off of their pupils, should read this book and also “Plato and a Platypus walk through a Bar.”

Allow Cathcart and Klein to break down questions about the inescapable Reaper with a joke: “Millie accompanied her husband Maurice to the doctor’s office. After he had given Maurice a full check up, the doctor called Millie into his office alone.” He said, “Maurice is suffering from a serious disease brought on by extreme stress. If you don’t do the following your husband will die. Each morning, wake him up gently with a big kiss then fix him a healthy breakfast. Be pleasant at all times and make sure he is always in a good mood. Cook him only his favorite meals and allow him to relax after eating….Try to relax him every evening by giving him massages…. If you can do all of this, every day, for the next six months I think Maurice will regain his health completely.”

On the way home Maurice asked Millie: “What did the doctor say?”

“He said you are going to die.”

Okay, German philosopher, Arthur Schopenhauer, once wrote that “the death of an individual is of absolutely no consequence,” and therefore it should be “a matter of indifference to us.”  Hmm, indifferent?

Here is the joke: “So Ole died and his wife Lena went to the local paper to put a notice in the obituaries. The gentleman at the counter, after offering his condolences, asked Lena what she would like to say about Ole. Lena said:  You just put ‘Ole died.’ Perplexed, the man said: “That’s it?” There must be something more you’d like to say about Ole. You lived together fifty years, you have children and grandchildren. Besides, if it’s money you’re worried about, you should know that the first five words are free.

Go buy the book….learn while laughing. 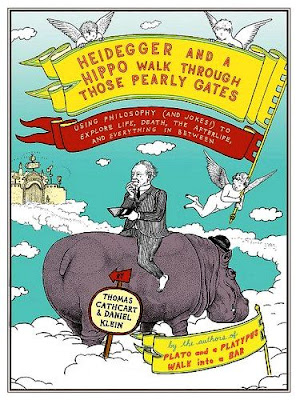 Heidegger and a Hippo Walk Through Those Pearly Gates: Using Philosophy (and Jokes!) to Explore Life, Death, the Afterlife, and Everything in Between


Plato and a Platypus Walk into a Bar...SAY WHAT?--book review
Posted by Mercury at 5:31 PM