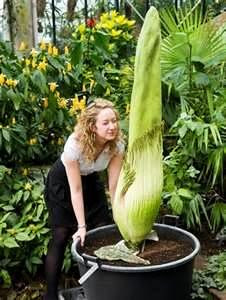 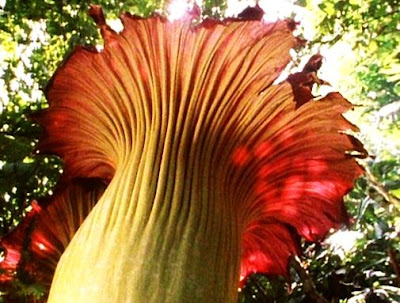 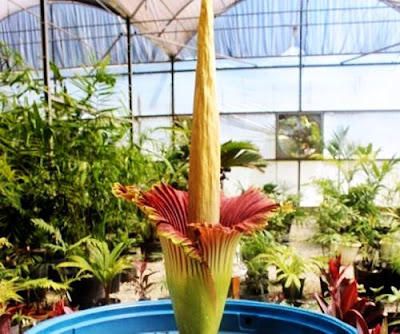 A titan arum (Amorphophallus titanum), also known as "corpse flower" or "corpse plant" due to its odor, is displayed at the Inhotim Art Institute and Botanical Garden in Belo Horizonte, in the Brazilian southern state of Minas Gerais, on December 26, 2012. Hundreds of visitors are flocking daily to the garden to watch the rare blooming of the world's smelliest and largest tropical flower.

Also known as the "corpse flower" because of a smell likened to rotting flesh, it began blooming on Christmas Day and is already beginning to close, botanist Patricia Oliveira told AFP. The flower "has a lifespan of 72 hours, during which its stink and meat-coloration attract pollinators: carrion flies and beetles," added Oliveira, who works at the Inhotim garden, about 445 kilometers (275 miles) from Rio de Janeiro, housing the massive flower. Titan arum, also known by its scientific name, "Amorphophallus titanum," which means misshapen giant penis, is native to the rainforests of western Sumatra. It rarely flowers, is incredibly difficult to cultivate and takes six years to grow. Thursday, this Brazilian specimen reached 167 centimeters (5 feet 3 inches) in height, but the species can grow up to over three meters (10 feet) tall. This "is the second time it bloomed. The first time was in December 2010," Oliveira said. When it flowers, the bloom has the same temperature as that of the human body, which helps spread its pungent smell. The species was first described in 1878 by Italian natural scientist Odoardo Beccari. Ten years later, it bloomed in a London botanical garden and its next flowering occurred in 1926.