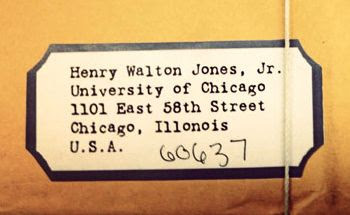 
"Mystery of the Indiana Jones Journal Solved: It Came From the Internet. And Guam"

Like all good things, the mysterious journal addressed to Indiana Jones that arrived at the University of Chicago last week came from the internet – eBay to be exact. And how it found its way to the university is a tale that ought to be told with a cinema map and an animated moving read line.

The university had received a package (above) that was addressed to “Henry Walton Jones, Jr.” Inside was a near-exact replica of the journal of Abner Ravenwood, which Indy uses in the film Raiders of the Lost Ark. Perplexed about its origins, the school posted on Tumblr and set up an e-mail tip line to try to find out if anyone could offer clues as to where the book came from. They also contacted Lucasfilm and an eBay user who had been selling similar replicas online. On Monday morning the university told Wired that they received an e-mail from the eBay seller, Paul Charfauros, informing them that he had gotten a letter from the U.S. Postal Service to say that one of his replicas — intended for a buyer in Italy — had been lost in the mail.

“Somewhere between Guam and Italy the replica fell out of its original external package and was lost in Honolulu, Hawaii,” Garrett Brinker, director of undergraduate outreach for the University of Chicago, told Wired. “Then for some reason, with fake postage, no tracking, not even a zip code — it looks like the Postal Service had to manually write in a zip code on the package — somehow without all of that the package landed in our laps in Chicago, Illinois.”

As the university elaborated on their Tumblr:


We believe that the post office wrote on our Zip code on the outside of the package and, believing the Egyptian postage was real, sent it our way. From Guam to Hawaii en route to Italy with a stopover in Chicago: truly an adventure befitting Indiana Jones.

After the university discovered the mystery journal last week, dozens of tips and theories poured in about where it could have come from — some thought it was part of an ARG, others thought it was a promotional stunt by Lucasfilm, and still others thought it might have been a piece of creative “art abandonment.” But Brinker himself hoped that it was the work of an enterprising prospective student who wanted to send a very creative admissions essay. Some had thought that it might be a lost delivery from an eBay replica-maker, but others hoped for an even more elaborate tale behind the journal’s origin. Even Brinker.

“We anticipated this in some sense, and as I mentioned before, it’s one of the least romantic theories,” Brinker said, adding that he’s still delighted about how the mystery has unraveled. “Now we even have multiple departments on campus that want this journal and want to store this journal, including special collections in one of our libraries…. So it’s turned out to be quite a fascinating story.”

The eBay seller has offered to let the university keep the replica and in return the school will be sending him some University of Chicago garb as a sign of gratitude for the magic package, which, of course, belongs in a museum.
Posted by Mercury at 11:22 AM