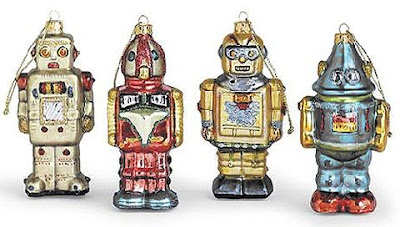 Institute for Ethics and Energing Technologies

Hot chocolate, warm clothes, and wrapped presents under a tree, ‘tis once again the season to be jolly! We are familiar enough with the holidays as they are now; but what might Christmas be like in 50 years?

Of course it's impossible to predict with 100% accuracy how life will change in the next half century, but if we track today's exponentially-advancing technologies; and then add some creative possibilities, we can project a plausible scenario of what it might be like living in our high-tech wonderworld of 2062.

Humanity has much to be thankful for as we trek through the 21st Century. By 2040, scientists have unraveled many of the mysteries surrounding consciousness, which some believe will one day lead to mind-enhancement systems that lower crime rates and reduce violence, making the world a safer place.

Changes are everywhere in 2062. Driverless cars whisk us about; and stem cells, DNA editing and nanobots keep us forever healthy and youthful. Robot servants have become the most popular home acquisition; but Christmas is still our favorite time of year for socializing and exchanging gifts with friends.

Nanotechnology may help the world become a better place in 2062. Powered by personal nanofactories that help create a scarcity-free lifestyle, these nanowonders are slashing the rich-poor gap in developed nations, fighting poverty in third-world countries, and offering the beginnings of a peaceful 'global village'.

Gifts topping Santa's list include interactive 'smart' toys that come alive on voice command and virtual reality systems that provide experiences beyond our wildest dreams. For that special person who has everything, a two-week vacation at the Mars Space Colony can be purchased for $250,000.

Launched in 2050, the space elevator slashed costs of getting people into orbit. The SE has become the prime driver in the booming space tourism industry. Orbit access is now only an elevator ride away.

Entering a Holodeck-like recreation facility, people voice selections for a desired theme, such as a romantic fantasy, winning a 19th-Century American West gunfight, or any other bold scenario that one's mind can conjure up. Simulated adventures have become the rage for entertainment buffs worldwide.

Homes have changed too. Windows and doors can alter their shape, color and location, allowing fresh air and light where needed. Satellites provide house ID via Wi-Fi/thought technology; street addresses no longer necessary. Mind scans restrict access to family and guests, ending the need for locks and keys.

Turkey remains the favorite holiday dish in 2062, but messy food preparation has disappeared. Nano-replicators provide perfect meals that include the exact nutrient requirements for each family member.

With voice command, mom selects the food, which is then served by the household robot. Mom, Dad, Daughter, and Son sit down to eat. Although they live on different continents, all four Grandmas and Grandpas appear as lifelike holograms, and join the festivities for the traditional yuletide toast.

After dinner, the moment has finally arrived – "let's open presents," Dad says. With a shriek of joy, Daughter opens her gift, a Barbie Doll resembling a mini-human with soft skin and a likable personality. Programmed to require love and attention, the intelligent robo-doll quickly snuggles up to its new owner.

Next, the Son opens his gift, Animal Reality, a 'smart' toy made of nano-components that can change into any animal imagined by its owner. Built-in safeguards prevent creating harmful or illegal objects.

Will the future unfold in this upbeat way? Clearly, the road to 2062 winds around unknown turns, but strong demands for technology improvements drives this vision forward. Happy holidays, everyone; I wish all of my readers the happiest of futures – in today's world and tomorrow's!

Simon's Cat and the Christmas tree