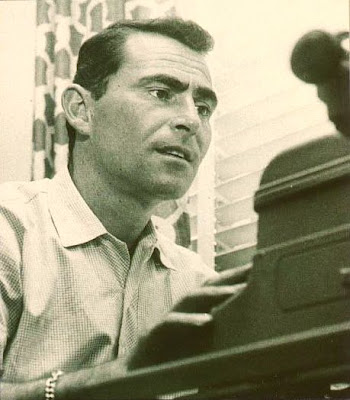 "It is difficult to produce a television documentary that is both incisive and probing when every twelve minutes one is interrupted by twelve dancing rabbits singing about toilet paper."

Today is "the birthday of Rod Serling, born in Syracuse, New York (1925), best known as the creator, writer and producer of the television series The Twilight Zone, which first aired in 1959. Serling believed it was the writer's job to "menace the public consciousness" and considered television and radio as a means for social criticism.

In the mid-1950s, Serling won three Emmy awards for three television plays he wrote. He grew increasingly frustrated over not being allowed to write controversial scripts about humanity because corporate sponsors would not subsidize messages that might be offensive to the public, so he switched to science fiction. He found it was easier to slip social criticism by the censors if it took place in a fictional world. Creating The Twilight Zone allowed him total artistic freedom, and the show was enormously popular during the five years it aired on television."


Promotion for the Twilight Zone

Rod Serling [Wikipedia]
Posted by Mercury at 8:53 AM