Importance of critical thinking in science 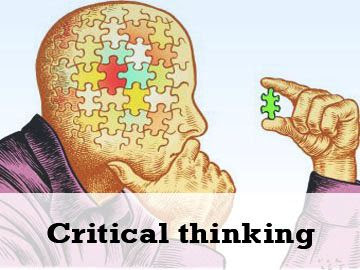 For the past couple years, I’ve been working as a science communicator on two fronts, as a freelance science writer and a community college Earth science instructor. I’ve seen, from many angles, the difficulty people have understanding and assessing scientific issues. With topics that are publicly contentious, those difficulties rarely arise from a simple lack of understanding. Other things get in the way. A student once said to me, “Well, I’m a conservative, so I don’t believe in climate change.” The frankness of that statement opens up a window into the obstacles science faces in the public sphere. (If only those who post internet comments were as honest with themselves…)

The combination of science writing and education has influenced my approach to both, which share a common, overarching goal: to reach out to people and present them with the power, wonder, and relevance of science. Like most educators, one of my central aims is to impart critical thinking skills— to help students make sound decisions in a confusing world of conflicting information, sales pitches, and smooth-talking politicians.

Though critical thinking is universally regarded as a pillar of higher education (including by employers seeking college graduates), results show that students are not developing their critical thinking skills to the extent we expect. For their 2009 book, Academically Adrift: Limited Learning on College Campuses, Richard Arum and Josipsa Rocksa followed a little over 2,300 college students through their first two years of school. They found “a barely noticeable impact on students’ skills in critical thinking, complex reasoning, and writing” and “no statistically significant gains [in these skills] for at least 45 percent of the students.”

These students may be learning things, but they’re not becoming better thinkers or writers. That’s a remarkable failure to realize the promise of a college education—and that disappointing reality actually appears to have gotten considerably worse over the last few decades. It’s irrelevant how much blame should be placed on the school and how much on the students. We must get better results.

As an educator, I’ve constantly struggled with how to stimulate growth in these skills. In an introductory Earth science course, my first job is to teach my students about plate tectonics, soil formation, oceanic and atmospheric processes, the climate system—all the things that comprise a firm foundation to build on in further classes. But the vast majority of my students will never take another Earth science course, and while this information is still useful in their lives (a point on which they may not particularly agree in the moment), there are more important things to be teaching them. There are larger points, like the nature of science and scientific thinking, and the perspective brought on by an appreciation of the complexity of Earth systems and the mind-numbing scale of the universe.

In the face of this balancing act, the traditional approach is often to simply focus on the details of a particular science (to build that foundation for prospective majors) and assume that all the students will absorb the other stuff in the process. Scientific literacy and critical thinking skills are seen as natural side-effects of studying a science. Critical thinking by osmosis.

I don’t think it reliably works that way, especially for students who expect to struggle with and be bored by science classes from the outset. It’s easy to sit through a class, memorizing some facts and working through assignments with minimal effort, without ever actually engaging with the scientific process that created this knowledge. I fear that too many of my students have done exactly that.

Increasingly, I’ve found myself addressing these big-picture, take-home points explicitly. For example, before the first box of minerals and rocks comes out of the closet, I now dedicate a couple weeks to critical thinking and the scientific method.

This progression of teaching style reached its (perhaps) natural conclusion when I realized that what I really want to do is give these students an entire semester on critical thinking and the nature of science. And why not? Why continue to pound the square peg through a round hole, herding disinterested students through “Physics for Poets” or “Rocks for Jocks” (their calculated paths of least resistance through science requirements), hoping that they’ll pick up these key skills along the way? There are many great reasons for students to experience various fields of science, but why not address critical thinking directly, as well?

This is hardly a radical thought, and I’m far from the first to think it. For decades, there have been pushes to teach these skills formally, which have ebbed and flowed with the educational tides. The Association for Informal Logic & Critical Thinking and the Foundation for Critical Thinking, for example, have long been advocating for better critical thinking instruction. Where standalone critical thinking courses exist, however, they are mostly found within the humanities and social sciences. Those courses often center on argumentation and literary criticism, or instead on the philosophy of logic, but there are opportunities to expand this— particularly by giving science a larger presence. I think there is an enormous amount of untapped value in a broader model.

I envision a course that incorporates many facets of critical thinking. Students should get an introduction to logic. They should learn a bit about cognitive science to understand some of the biases and mental shortcuts we all subconsciously employ. (How can you think at a high level without the awareness that there are wayward tendencies in your thinking machine that sometimes require troubleshooting and maintenance?) They should study some of the tools of rhetoric so they can identify the art of persuasion at work, particularly when they’re being targeted by it. And they should study the scientific method in this context, as a reliable guide through a treacherous terrain full of pitfalls and mirages.

These topics have one big thing going for them—they lend themselves very easily to an active and engaging classroom that fosters the ideal conditions for genuine learning and development. That’s a struggle in many subjects, but here it just comes naturally. Most of these concepts are best taught through application to familiar, real-world case studies. Fortunately, American culture is absolutely saturated with object lessons (Jersey Shore, anyone?) and sandboxes in which to hone skills. Student discussions absolutely beg to be facilitated—another fantastic learning environment. All students have opinions and perspectives that they bring to these issues, and the sharing and sifting of ideas among classmates should elicit the very critical thinking skills that we’re after. Few things encourage intellectual maturation like recognizing and examining the assumptions behind one’s opinions, and the course would be flush with opportunities to do so.

Take the public conflict over vaccinations, for example. Combing through the arguments of “anti-vaccine” advocates would reveal ways in which complicated information is misinterpreted and would illustrate the persuasive power of anecdotes. Digging deeper into the science strips the issue down to what we do and do not know, and how new knowledge would be acquired. Turning to the arena of public opinion, you can evaluate how others arrive at their opinions through a range of rational and emotional avenues. From there, you’re ready to put the spotlight on your own mind. How did you really form your initial opinion? Does it need to change?

If you can genuinely lead students to ponder their way through those thorny thickets, how can they not come out the other side with new eyes?

Like children who don’t notice the vegetables hidden in their favorite cheesy casserole, I think students would actually really enjoy a class like that, challenging and cognitively nutritious though it would be. It’s not hard to make this a fun and enlightening experience that sticks with students.

Contrary to the criticism that classes like this would merely be weekly exercises in debunking, critical thinking is as much about problem solving and extracting meaning from complexity as it is about not falling for hokum. (Of course, conspiracy theories and sasquatches would certainly make an appearance.) And this is where science fits in so naturally. Practice with a scientific way of thinking—developing conclusions that flow from the data, rather than cherry-picking data to support your pre-existing conclusion—adds such an important tool to the kit.

There is a need for a more inter-disciplinary alliance to bring many elements of critical thinking into one coherent experience for students. While each element is worthy of a semester-long deep-dive of its own, it’s not easy to get even a single semester with students, and I’d argue that a broad survey is the most efficient use of that time.

There are many, many factors contributing to disappointing outcomes in higher education—from changing student attitudes toward academics, to the rising tuition costs that drive students to work more while they’re in school, to problems in the K-12 education system— and there is no silver bullet that can take us were we need to go. But, as Albert Einstein recognized, “The value of an education in a liberal arts college is not the learning of many facts but the training of the mind to think something that cannot be learned from textbooks.” Colleges are not like the Field of Dreams (if we build it, they will think?), and it’s high time we rolled up our sleeves and got serious about making that training happen.

[Scott K. Johnson is a hydrogeologist by day, Earth science instructor at Madison College by the other part of the day, and freelance science writer for Ars Technica by night.]
Posted by Mercury at 5:06 PM