Brian May to host Moore's "Sky at Night"? 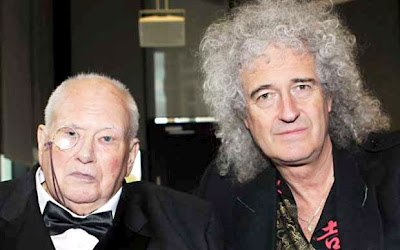 Queen guitarist Brian May should replace Sir Patrick Moore on BBC1’s Sky At Night, leading astronomy professors have claimed, hailing the musician as one of the few space enthusiasts who could live up to the deceased presenter’s “common touch”.

Sir Patrick, who fronted the monthly astronomy show since its launch in 1957, cultivated a “mad professor” image which attracted millions of viewers and helped him to popularise the science. He died earlier this month, aged 89, leaving the BBC with a key vacancy to fill.

Academics said the corporation should turn to Mr May, an astrophysicist and close friend of Sir Patrick, to take up the mantle.

“Both of them have a terrific gift for communication, which I must say I am quite jealous of. Brian is an enthusiast for astronomy, exactly like Patrick. Patrick cared about the moon as much as black holes as much as life on Mars. He didn’t discriminate. The problem with professional astronomers is that all of us have our favourite bits but Patrick could talk about anything,” Professor David Southwood, president of the Royal Astronomical Society and a senior research investigator at Imperial College, told The Daily Telegraph.

“You’ve got to have a pretty strong personality to replace someone who had such a strong identity, like Patrick. That’s why I think you’ve got to go into the celebrity stakes, [but the right presenter also needs] to have a complete and utter enthusiasm for the universe. If you don’t have that, it ain’t going to work.”

Dr Richard Miles, a former president of the British Astronomical Association, added: “Brian has wide experience and would grow into the job if he was given a free hand. It has got to be a larger-than-life character but no one can ever match Patrick in that regard.”

However, the BBC said it has yet to make a decision about whether to continue airing Sky at Night, let alone who might take over as presenter.

Kim Shillinglaw, the BBC’s commissioning editor for science and natural history, said: “We at the BBC are still absorbing the very sad event, which is Patrick Moore passing on. We already have a number of episodes in the can with him in.”

The growing campaign for Mr May to take over the job of presenting Sky at Night follows the news that the musician bought Sir Patrick’s house from him, to guarantee him a secure home for the rest of his life.

Mr May branded the Sunday Times as “carrion eaters” after the newspaper revealed that he had paid £480,000 in 2008 for the house in Selsey, West Sussex, then leased the property back to Sir Patrick for “one peppercorn if demanded”.


Deceased--Patrick Moore
Posted by Mercury at 10:08 AM