Alan Alda and the popularization of science 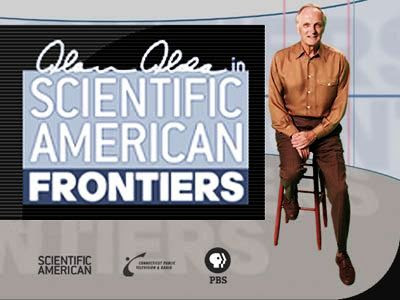 "How to woo an audience, with help from Alan Alda"

In late October, 30 scientists spent two days in a communication workshop, learning that successful communication is both simpler and riskier than they realized.

About 30 scientists from SLAC National Accelerator Laboratory and Stanford University threw caution—and, sometimes, their dignity—to the wind last week during a two-day science communication workshop sponsored by the Kavli Foundation. The workshop, conducted by faculty of the Center for Communicating Science at Stony Brook University, sought to provide better communication skills to scientists, who can then use their new skills to convey the essence of their research to lay audiences. Award-winning actor and writer and long-time science advocate Alan Alda gave the workshop's keynote address.

During the hands-on portion of the workshop, participants stepped out of their comfort zones, practicing interviewing skills and delivering their messages to different types of audiences—messages they also practiced distilling to the most relatable, most understandable essence.

But, as the old saying goes, you can't find the derivatives of covariant tensors before you learn to handle vector fields. Before anyone, scientist or not, has a hope of getting an idea across, the lines of communication with the audience must be open, and making that connection requires effort.

Which explains why these 30 researchers at all different stages in their careers gathered in conference rooms and introduced themselves with funny gestures, played the mirror-mirror game made infamous by mimes, and tossed imaginary balls of energy to each other. "TeV or GeV?" quipped one of the participants.

The instructor, Valerie Lantz-Gefroh, laughed at the joke along with the rest, after a bit of explanation from the scientists in the room. Then she gently corrected them. The balls floated on the energy of affection, wobbled with misunderstanding, drilled forward in anger, she said. They represented human energies used to forge human connections.

The workshop's focus on human connections addresses a concern laid out by Alda during his keynote address to the group. A founding member of the Center for Communicating Science's advisory board, Alda said he fears the United States is on a perpetual blind date with science, with all the awkwardness, misunderstandings and occasional outright distaste that implies. And since science is the metaphorical suitor on the doorstep, roses and wine bottle in hand, the scientists trying to explain their research have the onus placed on them to make that good first impression and, if that doesn't work, to keep trying.

But the Center and Alda are there to help. Alda's own passion for science—and scientists—is evident. He hosted the PBS show "Scientific American Frontiers" for more than a decade, and often participates in the workshops. "When I work with them in a workshop like this I see so much exuberance," he said. "It's a lovely thing to see."

Alda himself might have pursued a scientific career, except, as he explained, "I came of age in the time of the Two Cultures," referring to British scientist and writer C.P. Snow's influential essay positing a gulf between the two intellectual cultures of the humanities and the sciences. "I knew I wanted to be an actor and a writer, so I thought science was closed to me." A case of bad communication in a poorly taught trigonometry class sealed the deal.

But though his joy in scientific discovery might be vicarious, it remains profound. "They start with the tiniest bit of data," he said, speaking in this case of cosmologists and astrophysicists in the group, "and because they're rigorous and exacting and logical they can discover some of the most fundamental properties of the universe. It's breathtaking."

Alda himself is an example of the blind date blossoming into a deep love affair. Sounds like the perfect qualification for matchmaker.

As part of the workshop, Alda also gave a public lecture, "Helping the public get beyond a blind date with science." Watch Alda's talk, presented by the Center for Communicating Science with underwriting by the Kavli Foundation, below.


Alan Alda: Helping the Public Get Beyond a Blind Date with Science