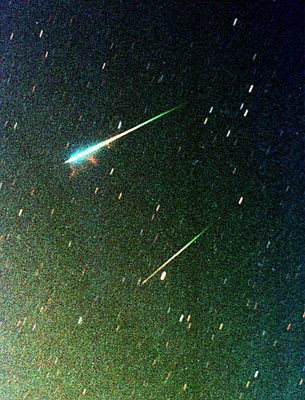 TAURID METEOR SHOWER: Earth is passing through a stream of gravelly debris from Comet Encke, source of the annual Taurid meteor shower. Because the debris stream is not very congested, Taurid meteor rates are low, no more than 5 per hour. The special thing about Taurids is that they tend to be fireballs.

The meteor shower is expected to peak around November 12th.


"The Sun Rips Off a Comet's Tail"

On April 20, 2007, the comet had just dipped inside the orbit of Mercury, perilously close to the sun, when a solar eruption struck and literally tore the comet's tail off. This surely has happened to comets before, but for the first time in history a spacecraft was watching. NASA's STEREO-A probe recorded a fantastic movie of the collision.


"We were speechless when we saw this," says Angelos Vourlidas of the Naval Research Lab in Washington, D.C. "I kept playing the movie over and over."

Vourlidas is part of a team of NRC researchers who built the Heliospheric Imager telescope onboard STEREO-A that recorded the event. He's also the lead author of a paper reporting the collision in the Oct. 10 issue of the Astrophysical Journal Letters.

The eruption that hit Encke was a CME or "coronal mass ejection." Sky watchers on Earth are familiar with CMEs because of the auroras they create when they occasionally hit our planet. CMEs are fast-moving and massive, packing billions of tons of solar gas and magnetism into billowing clouds traveling a million-plus miles per hour.

Actually, it is a little surprising that a CME succeeded in ripping off a comet's tail. For all their mass and power, CMEs are spread over a large volume of space. The impact of a gossamer CME exerts little more than a few nanoPascals of mechanical pressure—softer than a baby's breath.

The ripping action must have been something else.

"We believe the explanation is 'magnetic reconnection,'" says Vourlidas. Magnetic fields around the comet bumped into oppositely directed magnetic fields in the CME. Suddenly, these fields linked together--they "reconnected"--releasing a burst of energy that tore off the comet's tail. A similar process takes place in Earth's magnetosphere during geomagnetic storms powering, among other things, the aurora borealis.

"In a sense, the comet experienced a geomagnetic storm," says Vourlidas. "It is the first time we've ever witnessed such an event on another cosmic body."

"Although STEREO is primarily designed to study CMEs and their impact on Earth, we hope this CME strike on Encke will provide insights to scientists studying comets as well," adds Mike Kaiser, STEREO project Scientist at NASA's Goddard Space Flight Center.

Among astronomers, Encke is one of the most famous and important comets. It was only the second comet named, after Halley itself, and it is the shortest-period comet known. Encke loops around the sun once every 3.3 years compared to, say, once every 75 years for the more typical Halley.

Encke's short period combined with its trajectory inside the orbit of Mercury means it may have been blasted by CMEs more often than any other comet routinely observed by astronomers. Could this have some effect on the comet's nature and evolution? "We don't yet know."
Posted by Mercury at 7:21 PM