Thanksgiving has sparse reference in literature 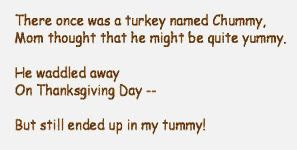 My Home Page
Light, airy scent
Caught and inhaled
Warm aroma of a turkey in the oven
With the sweet smell of fresh bread
Decorative centerpiece
Surrounded by delicious dishes
And the spicy whiff of apple cider
Heat radiating off the stove
My name drifts above the noise
Ears at attention, I watch intensely
Sniffing the air as I find my chair
The feast will begin soon
Glancing out the window
Bare trees sway in the November wind
Dry and golden grass is dead
Snowflakes stray from an overcast sky
Plate of food lying before me
Steam rising to thaw my rosy cheeks
Teeth sinking into tender meat
Mashed potatoes melt in my mouth
Main courses over, time for dessert
Foamy lemon meringue
Crunchy, gooey pecan
And soft chocolate cream
Belly bloated and satisfied
Tired eyes drooping
Curled in big, soft chair
Sleeping snuggly on Thanksgiving

When I first set out looking for references to the Thanksgiving celebration in literature, I had a hard time finding them. A few people suggested Laura Ingalls Wilder’s Little House on the Prairie. Although the series is set in the latter half of the 19th century, after Abraham Lincoln encouraged the celebration of Thanksgiving as a national holiday, there’s no apparent mention of its observance by the Ingalls family (I searched in Google Books and on Amazon).

That other 19th-century classic about a struggling rural family, Little Women, by Louisa May Alcott, also contains no mention of Thanksgiving, but in 1882 the author released An Old-Fashioned Thanksgiving. First published as part of a series of short stories narrated by Jo (the aspiring writer sister from Little Women), the children’s tale is like an early version of the movie Home Alone—with slightly less mayhem.

When their parents are called away to Grandma’s deathbed the day before Thanksgiving, the Bassett children decide to prepare the meal on their own. Prue pulls the wrong “yarbs”—herbs in the country dialect Alcott uses for her rural New Hampshire characters—and puts catnip and wormwood in the stuffing instead of marjoram and summer savory. The kids nearly shoot a neighbor friend who comes to the house dressed as a fearsome bear (a misguided prank). In all the commotion, the turkey is burned and the plum pudding comes out hard as a rock. But all’s well that ends well, and Ma and Pa return in time for dinner, along with some other relatives, explaining that Grandma wasn’t dying after all—it had just been a big mix-up.

Before all the hullabaloo, Ma has this to say about the effort that goes into the annual feast:

“I do like to begin seasonable and have things to my mind. Thanksgivin’ dinners can’t be drove, and it does take a sight of victuals to fill all these hungry stomicks,” said the good woman as she gave a vigorous stir to the great kettle of cider apple-sauce, and cast a glance of housewifely pride at the fine array of pies set forth on the buttery shelves.

An even earlier book about rural New England life was Harriet Beecher Stowe’s 1869 Oldtown Folks. Stowe describes celebrations from her childhood, including “the king and high priest of all festivals,” Thanksgiving. She explains that preparations took a whole week, because at those times even the conveniences of her adulthood, such as pre-ground spices, were not yet available. In one passage she muses about something that remains a staple of the Thanksgiving table, pie:


The pie is an English institution, which, planted on American soil, forthwith ran rampant and burst forth into an untold variety of genera and species. Not merely the old traditional mince pie, but a thousand strictly American seedlings from that main stock, evinced the power of American housewives to adapt old institutions to new uses. Pumpkin pies, cranberry pies, huckleberry pies, cherry pies, green-currant pies, peach, pear, and plum pies, custard pies, apple pies, Marlborough-pudding pies,—pies with top crusts, and pies without,—pies adorned with all sorts of fanciful flutings and architectural strips laid across and around, and otherwise varied, attested to the bounty of the feminine mind, when once let loose in a given direction.

Another giant of American literature, Mark Twain, included a quote about Thanksgiving in Pudd’nhead Wilson, his 1894 novel. Each chapter begins with an aphorism from Pudd’nhead’s calendar, including this witticism:


Thanksgiving Day. Let all give humble, hearty, and sincere thanks, now, but the turkeys. In the island of Fiji they do not use turkeys; they use plumbers. It does not become you and me to sneer at Fiji.

A century later, Philip Roth found meaning in the Thanksgiving bird as the great equalizer of American society in his Pulitzer Prize–winning American Pastoral:


And it was never but once a year that they were brought together anyway, and that was on the neutral, dereligionized ground of Thanksgiving, when everybody gets to eat the same thing, nobody sneaking off to eat funny stuff—no kugel, no gefilte fish, no bitter herbs, just one colossal turkey for two hundred and fifty million people—one colossal turkey feeds all. A moratorium on funny foods and funny ways and religious exclusivity, a moratorium on the three-thousand-year-old nostalgia of the Jews, a moratorium on Christ and the crucifixion for the Christians, when everyone in New Jersey and elsewhere can be more irrational about their irrationalities than they are the rest of the year. A moratorium on all the grievances and resentments, and not only for the Dwyers and the Levovs but for everyone in America who is suspicious of everyone else. It is the American pastoral par excellence and it lasts twenty-four hours.

Finally, a number of contemporary novels use Thanksgiving as the backdrop for family dysfunction—perhaps none so disastrous as in Rick Moody’s 1994 The Ice Storm, about two suburban families during the 1970s. For example:


Thanksgiving dinner at the O’Malleys, as Benjamin had often pointed out, was like waiting for the end of a ceasefire. Billy and her father would assume a guarded silence until the first drinks had been consumed. Then Billy would launch into his list of dissatisfactions beginning with, say, her father’s preposterous support for the House Un-American Activities Committee. Open disgust was not far away.

Here’s wishing all of you a safe, happy and relatively dysfunction-free Thanksgiving!

Thanksgiving lithograph postcards from the past

Thanksgiving films
Posted by Mercury at 11:27 AM