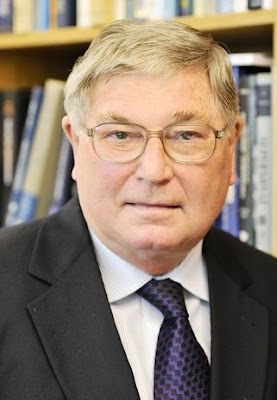 In 1986, Sargent and his colleagues reported their discovery of a new quasar — or starlike object radiating immense quantities of energy — more than 10 million light years farther than had been found before.

Wallace L.W. Sargent, a Caltech astrophysicist known for his observations of black holes, quasars and other celestial objects at the farthest reaches of the universe, died Oct. 29 at the USC Norris Comprehensive Cancer Center in Los Angeles, according to a Caltech spokesman. He was 77 and had been battling prostate cancer.

A professor emeritus of astronomy, Sargent arrived at Caltech from his native Britain in 1959 and spent three years as a research fellow. He returned to the university in 1966 as an assistant professor and became a full professor in 1971.

Sargent did much of his research at Palomar Observatory in northern San Diego County using its 200-inch Hale telescope. He was the principal investigator for the observatory's second sky survey, which ran from 1985 to 2000 and converted photographic images to digital format so they could be analyzed with computers. From 1997 to 2000 he was director of the observatory, which is owned and operated by Caltech.

His areas of expertise, according to Caltech, included analysis of quasar absorption lines and surveys of active galactic nuclei and remote clusters and superclusters of galaxies. In 1986, Sargent and his colleagues reported their discovery of a new quasar — or starlike object radiating immense quantities of energy — more than 10 million light years farther than had been found before. Sargent and the Caltech crew used the Hale telescope while working with scientists in Australia.

Known as "Wal," Wallace Leslie William Sargent was born Feb. 15, 1935, in Elsham, England, and grew up in Winterton, a village northeast of Nottingham.

"Nobody in my family had been to high school," he said in a 1985 Los Angeles Times magazine profile. "There were no books in my house to speak of." But his mother, who worked as a housekeeper, brought home a children's encyclopedia; and he became fascinated by its photographs and descriptions of stars and planets. He attended the University of Manchester, where he earned bachelor's, master's and doctoral degrees.

After his initial tenure as a research fellow at Caltech, Sargent returned to England and did research at the Royal Greenwich Observatory. There he met his future wife, Anneila Cassells, who is now an astronomy professor at Caltech and the university's vice president for student affairs.

Wallace "Wal" Sargent passed away on October 29 at the age of 77. He was the Ira S. Bowen Professor of Astronomy, Emeritus, at Caltech. He was an outstanding observational astronomer at the forefront of spectroscopy for over 50 years during an immensely productive and distinguished career. He began his career at the Institute as a research fellow in Astronomy from 1959 to 1962. He returned as an assistant professor in 1966, becoming full professor in 1971 and Bowen Professor in 1981. Sargent served as Caltech's executive officer of astronomy from 1975 to 1981 and again from 1996 to 1997 and as the director of Palomar Observatory from 1997 to 2000.

Sargent was born in 1935 in Elsham, United Kingdom, and he was the first pupil of the Scunthorpe Technical High School to go to a university. He entered the University of Manchester in 1953, where he earned his bachelor's, master's, and PhD degrees, as well as becoming a lifelong supporter of Manchester United. It was shortly after graduation that Sargent came to Caltech as a research fellow. From 1962 to 1964 he was a senior research fellow at the Royal Greenwich Observatory, where he met and married astronomer Anneila Sargent (née Cassells), now the Benjamin M. Rosen Professor of Astronomy at Caltech and the vice president for student affairs.

Perhaps the most remarkable aspect of Sargent's contributions to astrophysics is the range of subjects in which he made fundamental advances. Among his accomplishments were the demonstration that most of the helium in the universe was produced in the Big Bang with which the universe began (with Leonard Searle), the first dynamical evidence for the presence of supermassive black holes at the centers of galaxies (with his student Peter Young), the measurement of the mass of the Milky Way Galaxy using the radial velocities of outer satellites, the discovery that most nearby galaxies harbor low-luminosity nuclear activity, and illuminating studies on the emission from quasars and Seyfert galaxies.

As varied as Sargent's scientific accomplishments have been, there is one area of astrophysics where he both pioneered the field and has remained in the forefront to this day: the astrophysics of the diffuse intergalactic medium and the chemical history of the universe. This field gave us the first glimpses of the high-redshift universe at a time when normal galaxies could only be seen to small cosmological distances.

Sargent is considered the father of quasar absorption line spectroscopy. Using innovative new astronomical detectors developed by his collaborator, Alec Boksenberg, Sargent explored the gas permeating the high-redshift universe. Sargent had the foresight to recognize the advantages for faint-object spectroscopy of a new kind of  electronic detector, the Image Photon Counting System, developed by Boksenberg at University College London. The Sargent-Boksenberg partnership—"Boksenberg's Flying Circus" as Sargent affectionately dubbed it—revolutionized the field by carrying out the first statistically rigorous surveys of  quasar absorption systems. Sargent, with Boksenberg and their collaborators, gave us a key physical insight into the nature of the material between galaxies and brought to the fore the importance of this technique for observational cosmology. They used this information to understand how the material of which we are made has evolved since the first galaxies formed.

Sargent led the second Palomar Observatory Sky Survey, a photographic survey of the entire northern sky that was converted to a digital image format so that it could be analyzed via computers. This process produced a catalog of over 50 million galaxies and half a billion stars, including tens of thousands of quasars, and was a model for the many surveys that have followed using CCDs.

Sargent was a leader in the development of the W. M. Keck Observatory, coleading its science steering committee during the observatory's crucial formative years. With the advent of the Keck telescopes, he capitalized on the new powerful instruments on the world's largest telescopes to extend his research to probe the material between galaxies to the farthest reaches of the universe. Sargent established the existence of metals, the products of stellar nucleosynthesis, in the intergalactic medium only a billion years or so after the Big Bang. This research is helping us to identify and understand the first stars to form in the infant universe, which will be the targets of the next generation of telescopes.

In addition to his research, Sargent had a major influence on astronomy as an educator, particularly through the string of brilliant, accomplished graduate students that he mentored during his career.

Chuck Steidel (PhD '90), the Lee A. DuBridge Professor of Astronomy at Caltech, was a graduate student of Sargent's in the late 1980s and remembers his ability to inject humor into any situation that was in danger of becoming overly serious. "This was quite necessary for calming a young graduate student such as myself," admits Steidel. "Our conversations would almost always end up on a topic other than my thesis—baseball, music, literature, sumo wrestling. Looking back it is hard to recall ever receiving direct advice from Wal, and yet somehow he profoundly influenced the way I view science. As a colleague, Wal has been just as important to me," continues Steidel. "Wal will be missed for much more than his scientific accomplishments."

Alex Filippenko (PhD '84), a professor of astronomy at the University of California, Berkeley, was also mentored by Sargent during his graduate studies at Caltech. At the end of a five-night observing run at Palomar Observatory in 1985 they made a chance discovery of a new type of supernova, and although Sargent had studied supernovae many years earlier, Filippenko recalls that Sargent gave him the lead in the analysis and publication of their results. "This literally changed my career," Filippenko says. "Wal always encouraged his students to capitalize on exciting opportunities that came their way."

Sargent is survived by his wife, Anneila Sargent; two daughters, Lindsay Eleanor Berg and Alison Clare Hubbs; sons-in-law Henry Berg and Dan Hubbs; and four grandsons—Patrick and Charlie Hubbs and Angus and Eric Berg. A public memorial reception will be held at a later date.
Posted by Mercury at 10:45 AM