New book by David A. Weintraub..."How Old Is the Universe?" 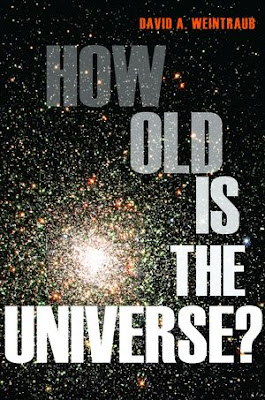 How Old Is the Universe?

[David A. Weintraub is professor of astronomy at Vanderbilt University. He is the author of Is Pluto a Planet?: A Historical Journey through the Solar System.]

When we look at something, it is only natural for us to wonder how old it is and where did it come from. This book answers those questions about the universe. Professor Weintraub does a fantastic job of showing the scientific evidence that has been accumulated over man's history that leads to a very accurate answer to this question today. Since something has to be at least as old as the things within it, he starts by discussing how we have determined the age of our Earth and Solar System, then the stars and our galaxy and finally other galaxies and the entire universe. Along the way there is a lot of interesting science covered and stories of many of the pioneers in science and how they made their contributions. Many interesting personal stories about these people are uncovered in this journey. One I found particularly interesting was the story of Henrietta Leavitt, who was one of a group of human computers hired to do mathematical calculations by hand for astronomers in the early 1900's. She was paid 30 cents per hour (5 cent more than most because her boss new she did exceptional work). They were all women since they could be paid much less. In 1908 she made one of the most significant discoveries of the 20th century in her analysis of Cepheid variable stars even though she was not an astronomer nor expected to do any analysis, just arithmetic.

This book covers a lot of science to come to the answer of the age of the universe and is a beautiful coverage of the scientific method. It is a true masterpiece!

It's all very well for astronomers to say that the universe is 13.7 billion years old, but you have to wonder just how they figured that out. Vanderbilt University astronomer Weintraub (Is Pluto a Planet?) explains it all for astronomy buffs in an enthusiastic way. He starts with how scientists first determined the age of the solar system--about 4.5 billion years --by isotope dating the oldest known rocks: lunar rocks brought back by astronauts, and meteorites that have collided with Earth. He then shows how stellar life cycles indicate an age of about 13 billion years. Astronomer Edwin Hubble's discoveries--that fuzzy spiral nebulae were really distinct and very distant galaxies, and that those galaxies are moving away from us--offered a new measure and new result: 13.5 billion years. Refining that number requires measuring things we can't even see: dark energy and dark matter, including exotics like wimps (weakly interacting massive particles) and machos (massive compact halo objects). Weintraub guides readers on a winding journey through history, explaining various dating approaches and illustrating the determination of astronomers to find the answer to one of the most basic questions about our universe. 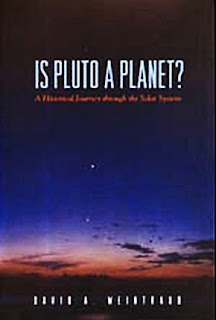 Is Pluto a Planet?: A Historical Journey through the Solar System

Email ThisBlogThis!Share to TwitterShare to FacebookShare to Pinterest
Labels: astronomy, cosmology, David A. Weintraub, How Old Is the Universe?, philosophy