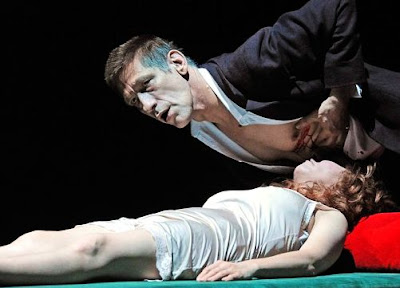 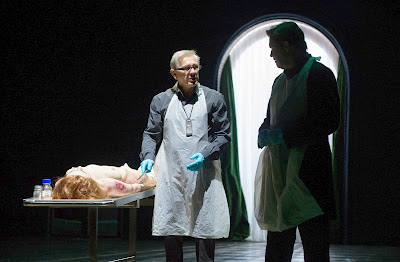 This All Hallows' Eve, Dracula trod the boards in a bold and minimalist reworking of Bram Stoker's gothic novel: Grzegorz Jarzyna's Nosferatu at the Barbican.

Despite existing in folklore and literature for 250 years, it was Bram Stoker who cemented our notion of the cape-wearing vampiric aristocrat with a taste for young ladies' necks. Brought to the London stage by Polish theatres TR Warszawa and Teatr Narodowy, writer and director Jarzyna uses the monster myth to explore our bewilderment of science, fear of death and the vampire lurking within us all.

Noseratu sees the familiar story of Lucy (Sandra Korzeniak) and Mina (Katarzyna Warnke) surrounded by a band of men, including Van Helsing (Jan Frycz), fighting off Nosferatu as he preys on the young women.

In a modern setting, Jarzyna's stage adaptation shows dark and self-centred characters that contrast with Bram Stoker's original clear divide between good and bad. Instead of the light and shade of Dracula and his nemeses, we are given a grey hue of morals; Mina shows little regard for her close friend as she pursues a heated affair with Lucy's fiancé and Van Helsing chloroforms Mina in a bizarre interrogation scene.

Memorable moments come from Sandra Korzeniak as the undead Lucy, performing a stalking dance of death as she moves in for the kill on her former photographer friend Quincey. When explaining her joy at being a vampire, an impressive screen lightshow appears, proving effective with the copious amounts of spooky smoke pumped on stage.

Technical difficulties with unwanted noise on the actors' microphones and a sluggish speed on the display of English subtitles made the production less accessible that it might have been.

Aesthetically, Nosferatu is pleasing on the eye and ear: minimalist set design reminiscent of German Expressionist cinema, mood-evoking lighting and a score of sound effects with such presence it deserves a credit on the cast list.

Lucy's terrible demise is part of the novel's horror - seeing the innocent, sweet, buoyant young woman turn into a shell of herself, growing pale and weak, despite multiple transfusions. Jarzyna gives us none of this, instead we are immediately introduced to a morose Lucy - her transition from human to vampire takes the form of mournful pacing and writhing on stage. As a vampire she appears more animated than when in life.

In an interview with the Polish weekly news magazine Przekrój, Jarzyna explains the rhythm of his production: "I wanted to achieve an effect of 'retardation', a slow-down, of stretching time to show moments when nothing really happens."

This lumbering approach feels suited to the gothic genre of suspense and Nosferatu certainly does choose to go at its own pace, however, not always succeeding in taking the audience with it.

This latest offering of vampire theatrics may not meet everyone's expectations of fang-toothed horror, but as a genre-defining piece of literature, Bram Stoker's Dracula deserves to be reimagined over and over.

Nosferatu at Barbican Theatre proceeds at an infernally slow pace, while it's difficult to work out what on earth is going on, writes Dominic Cavendish.

A real no-no, this Nosferatu is brought to us in Polish with patchy English surtitles by TR Warszawa for a very short, not especially sharp and far from shocking spell at the Barbican.

It’s not, as one might expect, an attempt to stage the legendary 1922 German expressionist silent horror film by FW Murnau – that would have been interesting. It’s not even, either, a valuable digest of Bram Stoker’s immortal Dracula (1897), though director Grzegorz Jarzyna has drawn on the novel for inspiration and you probably need to be acquainted with the tale to figure out what on earth is going on for the 110-minute duration.

The evening proceeds at an infernally slow pace. White curtains billow atmospherically to one side of a large modern communal living-area dotted with couches. By degrees we identify the cluster of assembled characters – who sometimes mill about, sometimes stand stock-still and often appear infected by the urge to offer up Chekhovian pronouncements of a pseudo-scientific and philosophical nature about neutrinos, time and what-have-you.

There’s some thunder and a few flashes of lightning but it barely registers as frightening. Jarzyna “reads” the book not as a cue to have his audience shaking in mortal dread but as an invitation to embrace your inner vampire.

The primary victim of Wolfgang Michael’s grey-faced Nosferatu (who bears 50 shades of a tired office-worker) is the ravishing Lucy Westenra (Sandra Korzeniak), a young woman afflicted by drowsiness. She keeps wandering off in a stupefied daze while the menfolk – including her concerned fiancé Arthur Holmwood, the insane, insect-eating Renfield and baffled medical authority Dr Seward – try to fathom her malaise.

If only they’d read a bit of feminist literature. Lucy has a nasty touch of the Madame Bovarys; suffocating in her petit bourgeois world, she writhes in ecstasy under Nosferatu’s influence, and although he drains her of her life’s blood (an action rendered in a rather anaemic fashion here), she also becomes her own creature.

The same might be said of Katarzyna Warnke’s pretty Mina Harker, also caught in Nosferatu’s web and turned telepathic proxy after a spot of hypnosis, but by this stage I was starting to lose the will to live, let alone concentrate. At the end, the 400-year-old count willingly heads into the sunlight that destroys him – and a Gothic classic is finally purged of any trace of spine-tingling jeopardy. If it wasn’t such a snooze-fest, the whole thing would induce merciless laughter.

Thoughts on "Nosferatu"
Posted by Mercury at 2:41 PM