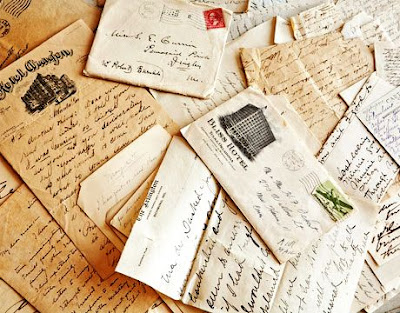 Hannah Brencher is a letter-enthusiast. She runs The World Needs More Love Letters, a letter exchange dedicated to connecting strangers across the globe through the art of letter writing. I discovered Brencher by browsing through online TED talks for November 2012, and noted her popular talk in the “less than 6 minutes” category. In her presentation she traced her own love of pen and paper as a means of personal expression and salvation, where letter writing guaranteed constant communication with her mother and helped Brencher fight chronic depression.

Experiencing first-hand the power of the written-word, and growing up in a family that emphasized hand-written exchanges, Brencher in October 2010 began writing love letters intended for strangers and leaving them in places around New York City. Libraries and cafes, in between books or seat cushions. She firmly believed in their capacity to uplift and connect, and their ability to look up once in a while from those small rectangular devices in our pockets.


"We're too busy expressing ourselves in 140-character bursts," she described in her presentation. To her, these snippets that represented our thoughts and updates became the new norm, which greatly affected the time and energy we devoted to ourselves on a daily basis. We're busy measuring our online accomplishments in the number of photos we share, the comments we make, the profiles we browse, or the videos we upload.

When one logs onto their social network and starts engaging in such activity, pretty soon we feel as though we've achieved a lot even though we've only spent the last three minutes tagging all our friends in posts. These activities are short and don't require a lot of energy, which then makes them appealing because they also don't demand a lot of time. Consequently, activities that are only marginally longer are shunned as we press on with our demanding daily schedules. To Brencher, these activities are essential and pull us back

"To sit down, pull out a piece of paper and think about someone the whole way through...is an art form that does not fall down to the 'Goliath' of 'get faster.'" This sums up a lot: a reminder that messages are in fact to human recipients rather than just pixilated profiles, that real and honest thinking should inform what and how we communicate, and that speed and efficiency has conditioned us to neglect this. I certainly don't think Brencher is advocating that we toss away our smartphones and disable our online personalities. But in leaving individually-addressed letters around a huge city and eventually forming The World Needs More Love Letters, she points to the honest connection that pen and paper can establish between two human beings.

There is plenty of discussion these days about the thoughtfulness and authenticity in a hand-written letter that is lost when reproduced electronically. At times content does not even seem to matter, for words and sentences become impersonal the moment they appear on screen in a specific font. You won't ever get "Grandma's Cursive" in Microsoft Word or Gmail, or "Cousin Ben When He's Celebrating". We've got emoticons and caps lock and font sizes to help us convey ourselves digitally, but all of us know just how easy it can be to misconstrue electronic text. Letter-writing to a large extent gets around this hurdle - one only came into play when email and instant messaging became the norm.

Brencher shared the motivation and reaction for her letter-exchanging organization. Fueled by the positive responses she received from those who picked up the messages she left for strangers, she created a free service that allowed those on the web to ask for a hand-written letter, "no questions asked." The online community leapt at the opportunity, and soon The World Needs More Love Letters expanded to include a team of coordinators, social media analysts, campus liaisons, and letter writers. The 'About' page has a telling line on the importance of Love (with a capital "L"): "Ridiculous, oozing, cannot pack this thang into 140-characters kind of love." People who want to can of course still leave their email addresses and find love letters in their inboxes, showing how Brencher is not calling for complete separation from technology and the digital.

The organization is about responding to those who know others that need love, and those who don't but happen to receive one and be pleasantly surprised. Brencher and her team works with elementary and middle-school students to write and create love letter bundles, teaching the younger generations the importance of personal connection and attention.

Such motives make sense, considering how quickly children are getting used to smartphones and tablets, which are soon probably going to become staples at their schools and in the household. I get the feeling we may not be far off from seeing a majority of these younger students at developed educational institutes never seeing a teacher lecture before a chalkboard. Soon it may become a norm to take notes electronically in the classroom. Brencher is right in assigning key importance to the craft of the pen and paper, and being able to thoroughly think through content and the delivery of the message.

Some could be critical, pointing out that email and electronic communication can easily be personalized depending on more important criteria such as content, rather than glittery ink and stamps and colored envelopes. Yes to all of the above, but I think Brencher is out to highlight something else: in taking for granted the swathes of digital text that dictate our schedules and holidays, our exchanges with employers and friends and relatives, we are forgetting the impact that effort and patience can have.

Hand-written letters are authentic because your wrist did all the work without cutting corners, whereas e-cards for particular holidays and online invitations come at the press of the button. You also can't afford to be sloppy when composing by hand, as there is no backspace key or restart option. This is a major difference that may play a larger role in the future; as we become so accustomed to a history of earlier online drafts and versions of documents, taking away the ability to reedit and retouch may be debilitating. In addition to learning the art of authentic human connection via letter-writing, we are also reintroduced to a key aspect of saying what you mean when you write it.

At the beginning of her talk Brencher admitted that she was one of the only kids at her college who had a reason to go to the P.O. box. While everyone else was busy BBM-ing (BlackBerry messaging) one another, her mother would send her weekly letters. It turns out that these trips to the mailbox prompted an important consideration of human connection via the written word. Ink and paper were here before digital telecommunications and online networks became our primary means of communication.

It seems that letters are greatly personal, and represent the valuable time, energy, and thought that went into composing it. In today's fast-paced world, these traits are precious and heart-warming, and this Brencher has recognized as she continues to tap into what personal connection really means in this age of constant connectivity. In realizing what letters have done for her, she enthusiastically wishes to offer the same to complete strangers who need it. This sharing is much more powerful than any button you can click on Facebook.


What an absurd debate...elimination of cursive writing

Walter William Marseille...analytics of handwriting
Posted by Mercury at 9:53 AM