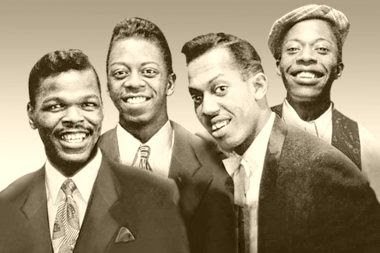 "Earl Carroll Dead: Singer for the Cadillacs and Coasters Dies at 75"

Earl Carroll, a lead singer of the Cadillacs and later a member of rival singing group the Coasters, died Sunday, Nov. 25, at the age of 75. He had been staying at a nursing home in New York City, and was suffering from a stroke and diabetes.

Carroll is best known for his part in the doo-wop 1950s group the Cadillacs, which he co-founded. Their hits included "Gloria," "You Are," "Wishing Well," "My Girlfriend," "Peek-a-Boo," a jive version of "Rudolph the Red-Nosed Reindeer" and "Speedo," which was titled after his nickname.

In a 1994 interview via The Daily News, Carroll explained how he got his nickname. "I always liked to take my time, do things at my own pace," he said. "Since I was a kid, the other guys would be telling me, 'C'mon, hurry up, Speedy.'"
In 1961, Carroll joined rival the Coasters and performed with them for 20 years before reuniting with the Cadillacs for a car commercial. He also worked as a janitor at Public School 87 in N.Y.C., where students loved referring to their local celebrity as "Speedo." A book, That's Our Custodian, was even written about Carroll.

The Cadillacs appeared in the movie "Go Johnny Go," where they lip-synched to "Please Mr. Johnson" and "Jay Walker." They're also credited with being one of the first groups to wear colorful performance outfits and a choreographed dance routine while singing.

Carroll reportedly retired from his janitor post in 2005 and continued to sing with the Cadillacs until his health forced him to quit.


"Earl Carroll, Lead Singer of the Cadillacs, Dies at 75"

Earl (Speedo) Carroll, the lead singer of the 1950s doo-wop group the Cadillacs, who later found contentment, plus a measure of abiding renown, as a New York City school custodian, died on Sunday in Manhattan. He was 75.

The cause was complications of diabetes and a recent stroke, said Vito Picone, the lead singer of the doo-wop group the Elegants and a longtime friend.

One of a cornucopia of street-corner tight-harmony groups formed by young black men in midcentury Harlem, the Cadillacs were among the first to incorporate rigorously choreographed dance moves into their performances.

The group, which flourished for about a decade starting in the early ’50s, had hits with “Gloria” and “Speedoo,” whose title is a variant spelling of Mr. Carroll’s nickname.

Mr. Carroll later spent two decades with the Coasters before rejoining a new incarnation of the Cadillacs about 30 years ago. Buoyed by the tide of R&B nostalgia, the new group toured throughout the United States and abroad, performing mostly on weekends to accommodate Mr. Carroll’s day job at P.S. 87 in Manhattan.

Earl Carroll was born in Harlem in 1937. After his mother died when he was a small child, he was reared by the family of a young friend, Bobby Phillips. It was a propitious friendship: Mr. Phillips would also grow up to sing with the Cadillacs.

In 1953, the two young men formed a vocal group called the Carnations, whose other members were Lavern Drake and Gus Willingham. Their manager suggested they take a less florid name.

“In those days, there were a lot of groups with bird names,” Mr. Carroll told The Star-Ledger in 2010. “There was the Flamingos, the Cardinals and the ‘Earth Angel’ guys, the Penguins. Most of the bird names were gone. So then we went to cars. Somebody said, ‘What’s the finest car there is?’ and the light bulb went off: the Cadillac. You can’t get much classier than that.”

Signed to Josie Records, the Cadillacs had their first hit with “Gloria” in 1954. In live performance, they became known for their dazzling outfits, and for the dance routines choreographed by the renowned vaudevillians Cholly Atkins and Honi Coles.

Mr. Carroll’s nickname and the song it engendered were born in the same breath. One day in 1955, he later recounted, the Cadillacs were performing at an armory in Massachusetts. As they were leaving, Mr. Phillips caught sight of a torpedo on display there.

“Hey, Speedo, there’s your torpedo!” he told Mr. Carroll, who had a somewhat pointy head.

During the ride home, the nickname, and Mr. Carroll’s testy rejoinder, flew around the car. By the time the group reached New York, some evocative lines and a jaunty tune had emerged:

The Cadillacs recorded the song the next day, and it became their best-known number.

Information on Mr. Carroll’s survivors was not available. Mr. Phillips, who with Mr. Carroll was a mainstay of the reconvened Cadillacs, died last year.

Mr. Carroll is survived, at the very least, by generations of children, now grown, who passed through P.S. 87, a public elementary school on West 78th Street, during the years he worked there.

He had come to the school in the early 1980s to take adult-education classes in literacy. (As a result of the program, Mr. Carroll, who had a reading disability, went from a second-grade to a 10th-grade reading level, he told New York Newsday in 1991.)

Learning of an opening for a janitor there, he took the job in 1982. He remained until his retirement in 2005, sometimes singing as he worked, and regaling the students — “the teeny-weenies,” he called them — with tales of his musical life.

“You really felt good about keeping the school clean, and then the teeny-weenies, they love you so much,” Mr. Carroll told The San Diego Union-Tribune in 1988. “When they found out I was a rock ’n’ roller — I was on the 50th anniversary of the Apollo with Bill Cosby — the kids couldn’t believe it.”

He added: “Now they call me the star of the school.”


Speedoo, Gloria, Peek A Boo, The Girl I Love

The Cadillacs
Posted by Mercury at 8:32 AM