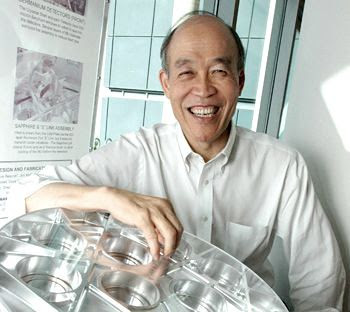 Physicist Robert Peichung Lin, a former director of the Space Sciences Laboratory at the University of California, Berkeley, who designed and built dozens of instruments to study solar flares, the magnetic fields on the surface of the moon and Mars and the plasma environment of Earth, died suddenly of a stroke on Saturday, Nov. 17.

Lin, 70, professor emeritus of physics, was working on at least four upcoming satellite and balloon experiments at the time of his death. He passed away at Alta Bates Medical Center in Berkeley.

According to Stuart Bale, UC Berkeley professor of physics and current director of the Space Sciences Laboratory (SSL), Lin essentially invented the field of high energy space physics after he and the late UC Berkeley physicist Kinsey Anderson accidentally discovered that solar flares emit high-velocity charged particles that can be observed from Earth.

“Much of what we know about astrophysical particle acceleration comes from X-ray and gamma-ray measurements that are based on underlying physics discovered by studying solar flares, much of it Bob’s work,” Bale said.

Bale said that it is hard to pigeonhole Lin’s field of study, since he excelled in many. Lin built satellite instruments to detect the energy of electrons and then put these electron reflectometers/magnetometers aboard the NASA missions Mars Global Surveyor in 1997 and Lunar Prospector in 1998.

These instruments enabled scientists to remotely measure the surface magnetic fields and reconstruct the geologic history of Mars and the moon. That technique contributed to the development of a full instrument suite being readied for launch next year aboard NASA’s Mars Atmosphere and Volatile Evolution Mission (MAVEN) mission.

Lin was the principal investigator for the 11-year-old Reuven Ramaty High Energy Solar Spectroscopic Imager (RHESSI), which is still using X-ray and gamma-ray detectors to explore the basic physics of particle acceleration and explosive energy release in solar flares.

“Bob Lin’s greatest achievement was RHESSI,” said astrophysicist Brian Dennis of the Solar Physics Laboratory at NASA Goddard Space Flight Center in Maryland. “It most probably would not have happened at all without his energetic support and leadership; it certainly would not have been nearly so successful.”

Lin’s team also built instruments for the Solar TErrestrial RElations Observatory (STEREO) and, most recently, the innovative modular minisatellite called CubeSat for Ions, Neutrals, Electrons, & MAgnetic fields (CINEMA), as well as European spacecraft such as Giotto, a 1986 mission to Halley’s Comet. That experiment led to the first report of a large molecule — a polymer of formaldehyde — on a comet, probably dating back to the origin of the solar system more than 4 billion years ago.

Most recently, he was working with graduate and undergraduate students on two other CubeSats and conducting balloon tests of a new Focusing Optics X-ray Solar Imager (FOXSI), which successfully observed the sun for six minutes on Nov. 2 during a flight in the New Mexico desert.

When SSL celebrated its 50th anniversary in 2009, Lin remarked that “It’s fortunate that, once our missions are up there, they work great and last forever,” a point of pride many colleagues largely credit to Lin.

“His late advisor, Kinsey Anderson, described him once as a juggler who could keep many items in the air at one time and who would sometimes just voluntarily add another one,” recalled astrophysicist Hugh S. Hudson of SSL and the University of Glasgow in Scotland. “In all of his fields, he was fully supportive of the students and postdocs involved, and all of them will miss his invariably helpful and intelligent inputs keenly now.”

From China to Berkeley

Lin was born in Kwangsi, China, on Jan. 24, 1942, but moved with his parents to London at a young age, and thence to Michigan. He obtained his B.S. from Caltech in 1962 and his Ph.D. in physics in 1967 from UC Berkeley. He continued his research at SSL, and in 1980 he was appointed a senior fellow at the laboratory. In 1988 he became an adjunct professor of astronomy at UC Berkeley, and in 1991 he was named a professor of physics. He served as SSL director from 1998 until 2008.

Hudson noted that one of Lin’s balloon experiments in 1984 discovered solar microflares, which inaugurated a large literature of research that quickly led to theoretical proposals that solar flares are made up of many micro- and nanoflares that heat up the sun’s atmosphere to several million degrees.

“He really defined what SSL was,” Bale said. “People around the country called it Bob’s lab.”

Bale also noted that more than 40 years ago, Lin began hosting his research group for lunch on Mondays at a local Chinese restaurant, a tradition that spawned similar Chinese lunch outings at places like the University of Minnesota.

Lin was a member of the National Academy of Sciences, a fellow of the American Academy of Arts and Sciences and the American Geophysical Union, and a recipient of the George Ellery Hale Prize from the Solar Physics Division of the American Astronomical Society. He also received a Docteur Honoris Causa de l’Universite de Toulouse in France.

In 2001, in recognition of his work with young science and engineering students, UC Berkeley’s College of Letters and Science gave Lin its Distinguished Research Mentoring of Undergraduates award.