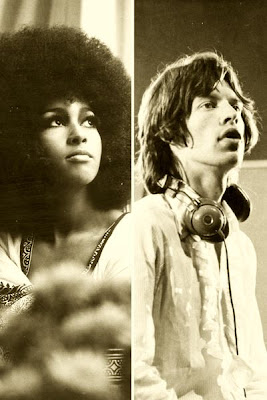 In a way this is somewhat sad. Personal things said will now be public knowledge.

'I'm broke' says Marsha Hunt, inspiration for Brown Sugar, who is selling 'Mick in his own words' from summer of 69 at Sotheby's

To some people in 1969, Mick Jagger was little short of being an uncouth hoodlum, what with his drug taking, louche lifestyle and rebellious views. But secret love letters, revealed here for the first time, show the rock star in a different light: as an articulate, dreamy, sensitive artist with a grounded self-awareness.

This side emerges in a series of letters he sent from Australia to Marsha Hunt, his lover, first child's mother and the inspiration for Jagger's controversial song Brown Sugar.

Written during one of the most tumultuous periods of Jagger's life, the letters reveal a man spending his free time reading the diaries of Nijinsky, the poems of Emily Dickinson and larking with Christopher Isherwood.

The letters are being sold by Hunt, who lives in a beautiful money pit of a house in France. She is well aware that the first question will be: why?

"I'm broke," she said. "Anyone who has the impression that I have money knows nothing about me. I had friends who came to visit from Pennsylvania and there was no electricity in the house because the bill had been too high, I was kind of grooving it with a wood burning stove. One friend said, 'surely you've got something you could sell?'"

That led to a light going off about the letters from the summer of 1969 which have sat in bank vaults for the best part of 30 years.

Hunt is 66 and says she does not want to become a liability. "Someone will protect them [the letters] and someone who protects them will protect me because I will make enough money from the sale to repair my house in France and if I fall down tomorrow with a stroke, which is happening with several of my friends, my daughter doesn't have to say 'what are we going to do about mom?'"

She hopes the buyer will "recognise that they have a piece of history", adding: "The letters speak for Mick at an incredible juncture of our lives. The summer of 69 was the end of a whole era of revolutionary spirit – we didn't know it was about to die. And who knew that this group of boys making music would 50 years on be still celebrated as a voice of the period?"

While the letters have remained secret, the affair has become a well documented chapter of British cultural history.

Hunt was a high-profile fixture of swinging 60s London and one of the only black faces. Born in Philadelphia, the Berkeley graduate arrived in London in 1966 and performed on the blues circuit with Alexis Korner and a young Elton John. Her big breakthrough was appearing in the original West End production of Hair, which led to Patrick Lichfield taking a famous nude picture of her for American Vogue and her appearance as the Christmas cover of Queen magazine with baubles in her distinctive Afro hair.

Hunt had success with her record Walk on Gilded Splinters and was approached about appearing in the photograph for the cover of the Stones' single Honky Tonk Woman. She was to be "girl in bar". "I said no," recalled Hunt. "I didn't want to look like I'd been had by all the Rolling Stones."

Jagger later turned up in person at her Bloomsbury flat sometime in May 1969 and one thing led to another.

For the Stones, it was a time of turmoil. They sacked Brian Jones and it was Hunt who pointed Jagger in the direction of Jones's replacement, Mick Taylor.

The relationship, a closely guarded secret until 1972, resulted in a daughter, Karis. "We commenced on something in the 60s that was perceived to be what the future would be," said Hunt. "That you don't get married and monogamy is not necessarily the way to go. We've backed away from that but at the time I think Mick and I felt we were doing something modern – we were having a child outside of marriage and that was acceptable."

Ten letters are being sold, all written in July and August of 1969 when Jagger was filming Ned Kelly in New South Wales. They paint a picture far removed from the popular media image of Jagger at the time. He talks about the books Hunt sent him for his birthday – "toying" through Nijinsky's diaries, reading about Navajo Indians, enjoying the poems of Emily "Dix" (Dickinson). In another he recounts being excited at meeting Isherwood, who was coming to discuss a screenplay of Robert Graves' I Claudius. "… I hope I get the part of Caligula," he writes.

Jagger uses one letter to talk about an unrealised future project of an intimate performance that would include "all our medias – films, music, drama and magic" in a "procession of images".

That's not to say the Jagger swagger is not in the letters too. He went to one party and the "chicks" were so plain that all he could do was eat chocolate eclairs. No boogaloo was happening, he laments.

There are also references to what was by any measure a fantastically eventful summer. For example, he dates his letter of the 20 July "Sunday the Moon" to mark the first moon landing; he talks about his regret at missing the Isle of Wight festival – where Dylan made his spectacular comeback – as well as "John & Yoko boring everybody".

Also he makes oblique reference to harrowing events such as the death of Jones and his failing relationship with Marianne Faithfull, who was taken to hospital in Australia after an overdose of pills. In one letter he wonders why some people's lives are so short and in another he explains that things are "a little difficult" – "my patience snaps my love peters out at vital moments".

Jagger also makes reference to what was an unhappy shoot in New South Wales. Although he waxes lyrical about the Outback – how the early morning mist "turns red and violent then hard and warm" – Jagger misses Europe with its "renaissance houses and medieval gardens".

"They are much the best letters by Jagger to have come up at auction," said the Sotheby's manuscripts specialist, Gabriel Heaton. "It is obviously a really important time in terms of cultural history."

Heaton said Jagger shows a "strength of character" that has enabled him to survive and thrive in the unreal world he lives in. "He has a strong sense of irony about himself and what it is to be a superstar. He is very self-aware but think about it – in order for someone to stay sane with what was going on in all of his adult life you would need to be pretty centred."

The filming of Ned Kelly, directed by Tony Richardson, was not a particularly happy one. His handwriting is noticeably different in one letter, the result of a gun backfiring badly and injuring his hand. "Boring crap," he writes.

It was while in Australia that Jagger wrote Brown Sugar and the letters have scattered references to songwriting. His first letter begins with the lyrics to Monkey Man with three extra lines specially for Hunt. Heaton said there was a lyricism that was reminiscent of his songs, lines like "… wind blows, rains cold, stars shine, millions of them, guitar riffs on & on … "

The letters will be sold as one lot at Sotheby's on 12 December and carry an estimate of £70,000-£100,000. Hunt said if she hadn't been hard up she would have happily offered them to have a public institution but she hopes the letters will correct some of the misinformation there has been about Jagger and that time.

She has told Jagger of her intention to sell. Does he support it? "I don't think so but they're not his."

She went on: "This is Mick in his own words … This is part of English history, it is part of rock history, part of cultural history and it corrects all the misinformation and I think we live in a time when misinformation is swallowed as, 'well, who cares?' Facts are relevant.

"The sale is important. Someone, I hope, will buy those letters as our generation is dying and with us will go the reality of who we were and what life was."

Brown sugar how come you taste so good?
Brown sugar just like a young girl should

Brown sugar how come you taste so good, now?
Brown sugar just like a young girl should, now

Ah, get along, brown sugar how come you taste so good, baby?
Ah, got me feelin' now, brown sugar just like a black girl should

Brown sugar how come you taste so good, baby?
Ah, brown sugar just like a young girl should, yeah