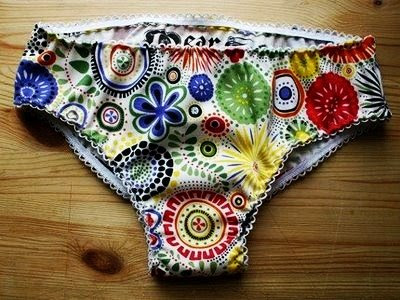 Was it worth billions to discover long-lasting underwear? This may provide a new twist to seduction.

"To boldly go where no undies have gone before"

Commentary
Many people doubt the value of America's manned space program and the billions of dollars spent on it annually.

These naysayers simply don't see what good comes from going to space.

The value of human exploration of space is lost on them. They get no thrill from knowing men and women have left this mortal coil for the blackness of space, that men have walked on the moon and littered the rocky orb's surface like inconsiderate campers.

The fact is, the U.S. space program has spawned dozens of products, from enhanced baby formula to advanced means of breast cancer detection.

But the latest innovation to come through the space research and development pipeline may just be the most significant — semi-permanent underwear.

Astronaut Koichi Wakata spent the past four and one-half months aboard the International Space Station. He only had four pairs of underwear. And he didn't wash them, not even in the sink. He wore the same pair of bionic BVDs for a month.

The space-age, Japanese-designed skivvies are made of cotton and polyester, are silver-coated and seamless. The high-tech drawers are kind of a cross between briefs and boxers — call them broxers.

According to Wakata, who returned to earth last week with the crew of the space shuttle Endeavour, he says he received no complaints from crew mates on the space station about his long-term long johns. Of course in space no one can hear you say "What is that smell?"

Also, the toilets on the ISS always are malfunctioning, so perhaps Wakata's uncommon union suit was merely a minor contributor to the station's ambiance. However, after the shuttle left the station, one of the major air-purifying systems failed. There is no word whether Wakata's interplanetary panties were a contributing factor.

Underwear that doesn't require frequent washing would be a must on long-term space missions like an eventual trip to Mars or beyond. There are no laundromats on other planets, and, even if there were, who would want to spend their whole trip watching a dryer spin?

Beyond the space program, if J-Wear passes the smell test, so to speak, it could be a boon to humanity that could rank right up there with the greatest inventions of all time, like the wheel, penicillin and pizza.

Think of the advantages for young men leaving home for the first time, bachelors or busy mothers. No more once a week trips to the laundry room, those could be reduced to monthly visits instead. Or perhaps could be reduced to zero. J-Wear is disposable.

During my college days I didn't wash clothes until the laundry bag was full and/or the drawers in the battered old dorm dresser were empty. I would stuff as many clothes as I could in one washer, plug in a couple of quarters and leave. When I returned my undies were not only clean, but often had taken on lovely pastel hues.

Moms, do you feel like your entire life is spent shuttling kids around, cooking or doing laundry? J-Wear won't help you with the first two problems, but your wash-day chores could be lessened considerably. This could be seen as one small step for a man, one giant leap for Mom-kind.

Can you imagine being able to wear the same clothes for a month before they needed to be washed? Not that you'd wear the same outfit every day, but instead of putting your clothes in the hamper every night, you'd just hang them up and wear them again — rather like I do now anyway.

I will wear clothes day after day until my wife gets wind of me and tosses them in the laundry basket. Sometimes the cats will give me away when they begin pawing the ground next to me like they are trying to bury something foul in their litter box.

The success of J-Wear would be detrimental to the makers of washers and dryers, as well as companies marketing laundry detergent. Sales of deodorant, perfume, cologne and body wash, however, likely would skyrocket.

For the record, Wakata brought his dirty drawers home with him in his suitcase, much like a college student returning home on break. If the NASA technicians opening the astronaut’s suitcase don't gag, faint or run screaming from the room, the experiment will be a success. Either that or they are mothers of teen-agers and are immune to such olfactory shocks.


ISS necessary?
Posted by Mercury at 8:54 AM