An Aesop fable and learning 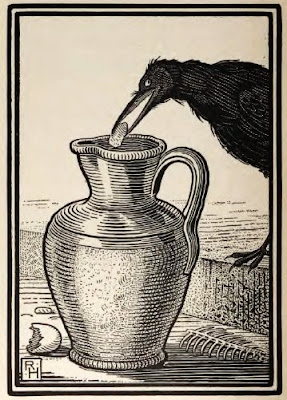 "The Crow and the Pitcher"

In a spell of dry weather, when the Birds could find very little to drink, a thirsty Crow found a pitcher with a little water in it. But the pitcher was high and had a narrow neck, and no matter how he tried, the Crow could not reach the water. The poor thing felt as if he must die of thirst.
Then an idea came to him. Picking up some small pebbles, he dropped them into the pitcher one by one. With each pebble the water rose a little higher until at last it was near enough so he could drink.

In a pinch a good use of our wits may help us out.
The following is from Wired and certainly illustrates some form of "reasoning". I remember a similar instance where a crow had a black walnut [whose shell is extremely hard and easily breached by a squirrel's incisors] and figured that the delicious nut meat could be removed and enjoyed by placing the black walnut in traffic and letting the vehicles crack the hard shell.

Wired
Aesop's fables are full of talking frogs and mice who wear clothes, but it turns out at least one of the classic tales is scientifically accurate.

Researchers presented four crows with a challenge from Aesop's fable "The Crow and the Pitcher": a container of water not quite full enough for the birds to reach with their beaks. Just like Aesop's crow, all four birds figured out how to raise the water level by dropping stones into the glass. The crows also selectively chose large pebbles over small ones, and quickly realized that dropping rocks into a container of sawdust didn't have the same effect.

"The results of these experiments provide the first empirical evidence that a species of corvid is capable of the remarkable problem-solving ability described more than two thousand years ago by Aesop," wrote the researchers in the paper published Thursday in Current Biology. "What was once thought to be a fictional account of the solution by a bird appears to have been based on a cognitive reality."

The researchers took four adult rooks, a type of intelligent crow, and tempted them with a tasty worm floating on top of a glass of water, just out of reach. Then they placed a pile of small rocks next to the crows. After they assessed the height of the water from the top and sides of the glass, the crows dropped stones into the glass until the water level rose enough for them to grab their prize.

Before this experiment, the birds had never been exposed to a glass with water in it, and they'd never used stones as tools. According to the researchers, the only other animal known to perform this kind of task is the orangutan, which has been recorded spitting into a tube to bring a peanut into reach.

"Corvids are remarkably intelligent, and in many ways rival the great apes in their physical intelligence and ability to solve problems," said biologist Christopher Bird of the University of Cambridge in a press release. "This is remarkable considering their brain is so different to the great apes'."

The antics of the four birds - Cook, Fry, Connelly and Monroe - can be seen in the videos below. Cook and Fry snagged the floating worm after just one try, while Connelly and Monroe succeeded after two attempts. Unfortunately, Fry had a bad reaction to one of the worms and gave up in the middle of the experiment.

Was the rook aware of the fundamentals of Archimedes' principle: "Any object, wholly or partly immersed in a fluid, is buoyed up by a force equal to the weight of the fluid displaced by the object."

Drop an "x" quantity of pebbles into the water filled cylinder and retrieve the food.

Now note that the rook employs an extended cognitive feature...not just any stone--size does matter.

Change the medium [sand for water] and the rook quickly discovers the medium that will yield the food.

Email ThisBlogThis!Share to TwitterShare to FacebookShare to Pinterest
Labels: "The Crow and the Pitcher", Aesop, cognition, learning, reasoning