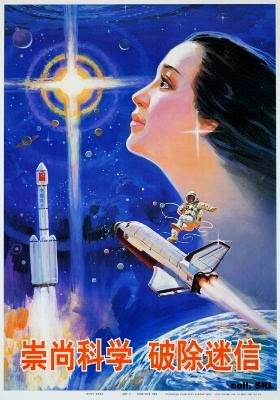 This is the wave of the future...not run by NASA but world-wide players.

"My Decade with Shenzhou"

SpaceDaily
2009 will mostly be remembered by space enthusiasts as the 40th anniversary of the first Moonwalk. For me, there's a second but more personal anniversary. I'm celebrating ten years of watching China's exciting buy mysterious human spaceflight program. This has not been an easy or a conventional task, but it's certainly been rewarding. China launched its Shenzhou 1 spacecraft in 1999, publically kicking off a program that has preoccupied me ever since.

China has conducted its Shenzhou spaceflight program behind a fairly tight veil of secrecy, and has offered few glimpses of its work to the outside world. Older spacewatchers would remember the problems of watching the Soviet Union's space program in the 1960s, where successes would be triumphantly splashed across news headlines, and failures concealed. General details on spacecraft design and mission planning were scarce.

Plans for landing a Soviet cosmonaut on the Moon were very well suppressed, and it took decades of research for the full story to be unveiled. For someone like me, who missed the 1960s and the Moonlanding, watching China has given me a chance to experience the same excitement and frustrations as an earlier generation of spacewatchers.

I've published dozens of articles on the Shenzhou program in publications such as SpaceDaily, and other news sources. I've also fielded a lot of inquiries from other journalists bedeviled by the same problems I have experienced, namely, the lack of easy access to information and sources inside China.

I haven't had much to work with. Most of my information comes from open-source literature, mostly published by the Chinese themselves. I have never had a "Deep Throat" source within China, contrary to the beliefs of some of my readers. Nobody from any external intelligence agency leaks things to me, either.

I have used speculation and deductive reasoning to fill in the blanks, sometimes missing the mark, sometimes not. The need to solve puzzles makes this more interesting to an inquiring mind than some forms of reporting, but it can also leave you shrugging your shoulders.

There's another beef to get off my chest. The Chinese space program moves slowly. Very slowly. During the first test flights, delays in excess of a year could be found between some missions. There would be very little discussion of the program in Chinese media sources during these gaps. This was frustrating to watch, but it also raised serious doubts about the state of the program in my mind.

Would the Chinese government cancel the Shenzhou program, just as it cancelled China's first attempt at human spaceflight in the 1970s? Gradually, we have all grown used to the delays and the drawn-out plans, which have seen intervals of roughly three years between astronaut launches.

Science fiction writers have long toyed with the idea of devices that accelerate or slow down time, like watching a video on fast-forward. I have often thought that such a device would be useful for watching China's space program. The slow pace of activities makes it very difficult for anyone to cover it as a dedicated reporting round, and nobody can build a full-time career around watching Shenzhou. This has probably deterred many journalists from getting involved.

Some mysteries have been solved over the years as missions finally flew, but some questions have never been properly answered. We still haven't had a solid technical overview of the Shenzhou spacecraft, or other elements of China's space hardware.

Judging from photography in Chinese media outlets, the influence of Russian technology on everything from the shape of the spacecraft to the design of China's spacesuits seems to be profound, but China still won't say how far it really goes. Nobody has explained how and why a series of heavily doctored photos of the Long March 2F rocket, used to launch Shenzhou, were leaked onto the Internet in 1999 before China officially revealed the program. We still don't know exactly what happened to Shenzhou 2, an unmanned test mission that apparently crashed on landing.

The activities performed by the crew of Shenzhou 6, widely suspected to have been photo-reconnaissance, remain unofficially documented. Rumours of technical problems during the flights of Shenzhou 5 (the first manned mission) and Shenzhou 6 have not been dispelled.

The lack of official access to the Shenzhou program has long highlighted a paradox in China's spaceflight strategy. The nation clearly craves recognition and admiration for its feats in space, but blocks so many pathways to promoting it. China's state-run media explains the program to its own citizens, but anecdotal reports I have received from visitors to China suggest that awareness is generally low.

The Chinese public cannot generally name their first astronaut or the spaceship that carried him. Outside of China, awareness of Shenzhou is even lower. China also engenders suspicion among international observers through its lack of transparency, suspicion that could well be justified in some cases.

This unusual lack of information has also created some interesting experiences for me. It's fun to take phone calls from international reporters about Shenzhou. It's even more fun when the reporters are calling me in Sydney, Australia, and they're based in Beijing! Being physically close to the story doesn't grant you any more access. I have also done interviews with magazines, radio and television networks based in Hong Kong and China, who should have an easier time than foreign wire service reporters.

The problem of revealing "state secrets", a very fluid concept in China, is probably enough to scare many Chinese reporters. Problems could appear for a journalist who talks to an engineer, and accidentally reveals something previously unrevealed. But quoting a foreigner who has already published his own material is probably safer.

This is an interesting time to be watching China. America's space program is in a state of flux, and is going through a very public dissection of its problems. Plans for returning American astronauts to the Moon seem to be open to question, with sources suggesting that the original plan for a 2020 landing are unrealistic. China has been relatively quiet in its recent statements, but has not concealed its desire to send its own astronauts to the Moon.

Jeff Foust wrote an article in the latest Space Review discussing a monograph about China's manned space plans, which they say is due to their wanting to be equal partners with the rest of the space powers.

What are your thoughts on this?

Ah, Chinese politics...about as complicated as a 12 jeweled Swiss watch. As I have stipulated over the years, it is time that NASA relinquish the reigns of a dominate space exploration. The bottom line for multiple players is more economic than political unless a significant coup is made. Space exploration should be a cooperative effort. Chinese, Indian, Russian--makes no difference,

I was amused at the following from Reuters...

SHANGHAI--No scars, no history of serious illness in the last three generations of your family, and no tooth cavities.

These are amongst the 100 health requirements for would-be astronauts vying to be part of China's next space team, the Yangtse Evening Paper reported on Saturday.

The selection process, which the paper said is for the second batch of Chinese astronauts, will disqualify those who have runny noses, ringworm, drug allergies or bad breath.

"The bad smell would affect their fellow colleagues in a narrow space," said Shi Bing Bing, an official with the 454th hospital of People's Liberation Army air force based in Nanjing, one of the six astronaut health screening hospitals.

Aside from the physical requirements of the job, the candidate must also possess a pleasant and adaptable disposition, the paper said.

"These astronauts could be regarded as super human beings," Shi said.

China sent its first man to walk in space in September last year. Zhai Zhigang, the son of a snack-seller, unveiled a small Chinese flag in space, helped by colleague Liu Boming, who also briefly popped his head out of the capsule.

The space walk was a step toward China's longer-term goal of assembling a space lab and then a larger space station.