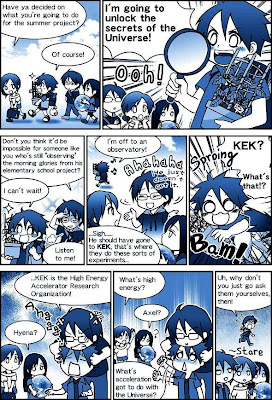 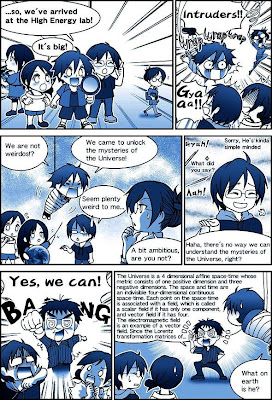 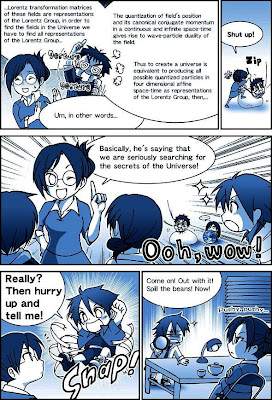 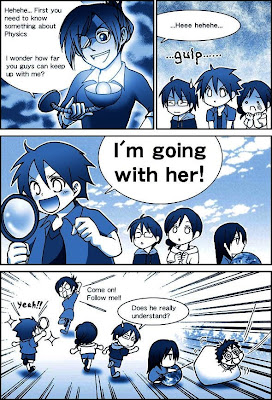 Symmetry
In Japanese, Takuya Uruno’s first name means "pioneer." In his 25-year career as a professional Manga artist, Uruno has been steadfast in living up to the title. He has spent only five years working on the popular serials that Manga is most commonly associated with and another 20 working in advertising and public relations, trying to find ways that Manga can function as something more than entertainment.

"Although Manga in public relations is similar to the ordinary Manga in technique and theme, it requires a different set of skills," he says. "My mission is to explore Manga’s new potential and to pioneer a new field. I am quite a rare case even within this country in which Manga is very big."

When KEK Communications Director Youhei Morita asked Uruno to help design a suite of kid-oriented pages for the KEK Web site, it was the perfect opportunity to push Manga’s role even further. KEK is the High Energy Accelerator Research Organization in Tsukuba, Japan. Working closely with scientists at the laboratory, Uruno came up with a series of episodes in which four children working on a science fair project visit KEK and meet two physicists, who take them on a tour.

The goal for Uruno was not to teach specific physics concepts, but to captivate his audience and to generate interest in science—to get people interested in high-energy physics and what physicists at labs like KEK do.

"I tried to depict children learning physics, rather than physics studied by children," he says. "Some are skeptical, others holding up their hopes, and they all come to KEK. Their encounter with doctors who are seriously searching for the secrets of the universe excites their interest in science."

Uruno found that Manga was extremely well-suited to navigating the conceptually complex waters of particle physics. Unlike reading a textbook, he said, Manga provides readers with a more immersive experience, enabling them to make stronger connections with different ideas.

"It is easier to understand complicated matters when one projects his or her feelings onto others and explores the experience," he says. "The characters are exactly for that purpose. The readers relive the drama, and the emotions can improve their understanding."

Other times Uruno had to defy Manga orthodoxy, finding new ways to present the topic without inadvertently limiting readers’ conceptions—something that can be hard to do when trying to graphically represent things that have never been observed.

"To depict a single elementary particle, I refused to go into the traditional Manga style in which animals or ordinary matters are personified," he said. "I presented it instead to be something obscure and vague so as to let the readers explore the real mysteries of the smallest entity."

Manga
Posted by Mercury at 5:21 AM

anything that stimulates an interest in science is good....my grand-kids were here and totally absorbed in movies and gaming until i started watching documentaries on Dinosaurs....they still love them. that is a good sign