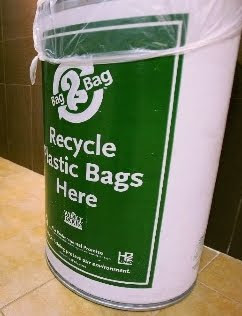 "Where Recycling Plastic Bags is Mandatory"

The New York Times
Earlier today I posted about how, despite Seattle voters’ rejection of a 20-cent tax on plastic and paper bags, the bag wars are likely to continue.

After publication, the American Chemistry Council (which represents plastic bag makers and bankrolled the successful Seattle opposition) sent me an e-mail message with some data I had requested about which localities have enacted mandatory bag recycling legislation.

The group also provided a list of places where plastic bag feesbans or taxes have been enacted:

As for the Seattle vote, “most Seattle residents already reuse plastic bags, and many also are aware that they can recycle them,” said Steve Russell, a vice president of plastics for the American Chemistry Council, in a statement.

i think twenty cents a bag is a bit steep....here it is 5cents off if you use the forever bag.....