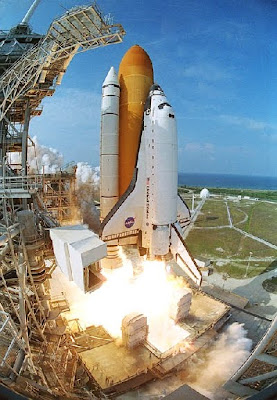 Again a mechanical problem has delayed the shuttle and cost more millions.

NASA delayed a Wednesday morning liftoff of the space shuttle Discovery because of an apparent problem with a valve in its fuel tank.

It was the second consecutive delay, after stormy weather postponed a launch attempt early on Tuesday. Discovery and its seven-member crew were preparing for a 13-day supply mission to the International Space Station.

The valve problem surfaced as technicians began fueling up the shuttle for a launch set for 1:10 a.m. EDT (0510 GMT) from the Kennedy Space Center in Florida.

"It appears we have a broken fill-and-drain valve," said NASA spokesman Allard Beutel. "It may not be broken, it may be an indicator that was not giving a proper reading."

Managers did not immediately set a new launch date. NASA has until Sunday to get Discovery off the launch pad before the flight would likely be reset for October due to scheduling conflicts with other launches and tests at Cape Canaveral Air Force Station.

In addition, the International Space Station is preparing for its first cargo ship from Japan and cannot receive the shuttle and the new Japanese vehicle simultaneously.

Discovery is scheduled to deliver lab equipment, supplies and spare parts to the station.

Including Discovery's flight, NASA plans seven more shuttle missions to the space station. The 16-nation, $100 billion project is nearing completion after more than a decade of construction 220 miles above Earth.

The shuttles are being retired late next year or early 2011. NASA is working on a new type of spaceship called Orion that can travel beyond the station's orbit to the moon and other destinations.

After the shuttle program ends, the station will depend on Russian, European and Japanese vehicles, though none has nearly the lift capacity of the shuttle, which can haul 50,000 pounds (23,000 kg).

Discovery carries new science racks, a freezer, a sleep station, a second treadmill, food, clothing, supplies and spare parts for the station, including an 1,800-pound (800 kg) ammonia coolant tank that will be installed during two of the spacewalks.

Among the experiments planned for the station is a bone-loss study that uses genetically altered mice as subjects. The mice are flying to the station aboard Discovery and will be left aboard until the next shuttle mission in November.


Good reason to keep feet on the ground

Shuttle Discovery is ready to GO...finally