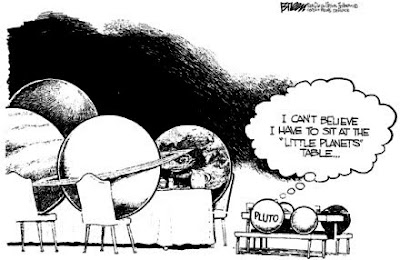 "Pluto still not a planet after astronomy meeting"

USA Today
An international astronomy meeting ended Thursday in Rio de Janeiro, and Pluto is still not a planet. The closing ceremonies of the 2009 International Astronomical Union (IAU) concluded with nary a peep about the planetary brouhaha that saw walk-outs and table-banging three years ago at the venerable astronomer's assembly, in Prague.

"None of that stuff at all came up," said IAU spokesman Lars Lindberg Christensen, speaking from a taxi speeding away from the meeting for one of Rio's restaurants. "I believe people still disagree, but the focus was really on science at the meeting."

In 2006, the IAU meeting assembly demoted Pluto into a "dwarf planet" (sometimes called a "plutoid") because it has failed to have "cleared the neighborhood around its orbit," in the words of the assembly's resolution. Pluto only weighs 0.07 as much as the rest of the objects in its orbit, which includes "Kuiper Belt" comets and Neptune, an ice giant planet. Earth, in contrast, weighs 1.7 million times more than the remaining objects in its orbit, asteroids and the moon, making it a planet, according to the just-released Pluto Confidential: An Insider Account of the Ongoing Battles Over the Status of Pluto, by astronomers Steve Maran and Laurence Marschall.

The two authors split on whether Pluto is a planet, with Maran arguing for the demoted world. "Pluto is still the people's planet and, if anything, more popular as an underdog than ever before," Maran writes.

"I believe that the IAU had no interest in revisiting the question of Pluto this year. The vocal disagreements that occurred at the General Assembly in 2006 embarrassed the organization. The decision made then, whether we like it or not, solved the IAU’s practical problem, by specifying how objects in the Kuiper Belt will be classified, for purpose of assigning names to them, an IAU responsibility. They name planets according to one practice and dwarf planets and asteroids in another way," Maran says. "Meanwhile, astronomers are generally agreed that the 2006 IAU planet definition is not helpful in our scientific work, and will fall into disuse. That may not bring Pluto back, however."

Indeed, the IAU meeting ended with a resolution to develop more astronomical resources for poorer nations, instead of a fight over Pluto. But the battle isn't likely over. "I expect people will still argue, and that's probably a good thing for science," Lindberg says.
Posted by Mercury at 5:53 AM

Pluto is "the people's planet"? Uh oh, maybe socialism is rising in America.

Clearly "the people" don't quite realize what and where Pluto is exactly, otherwise they would
probably prefer something much bigger and prettier, like Saturn.

When science gets to be decided by popular vote, then all of society is in trouble.

I see nothing wrong with Pluto being the peoples' planet.

"When science gets to be decided by popular vote, then all of society is in trouble."

imagine professors running for a position in which the public is able to vote on.....hmmmm

"We have a 'right to starlight,' astronomers say"

"The public's 'right to starlight' is steadily being eroded by urban illumination that is the
bane of astronomers everywhere, the International Astronomical Union said on Friday.

The body, which wrapped up an 11-day general assembly in Rio de Janeiro that
attracted galaxy-gazers from around the world, argued that authorities should use
more unobtrusive lighting in cities and towns.

Such moves would not only free up the night skies to make for easier viewing but also
promote environmental protection, energy savings and tourism, itsaid in a resolution."

Because most people are woefully ignorant of astronomy and science in general.

They defend a worldlet for reasons that have nothing to do with science or the reality of that distant dark iceball.

I see how lacking in knowledge even adults with college degrees are about the Universe, so why should I trust them to decide what science and its true professionals should focus on?

Would you let someone off the street perform a medical operation on you?

"Would you let someone off the street perform a medical operation on you?"

That analogy doesn't coincide with the popular opinion regarding things of the universe. Deciding Pluto status is not a "life or death" situation.

"...most people are woefully ignorant of astronomy and science in general."

No argument there, but I tolerate such situations.

This Pluto issue is getting out of hand. As I have written, the popular lore of Pluto can remain as it was with the understanding that astronomers have their own definition. It is not an uncomfortable or incompatible position.