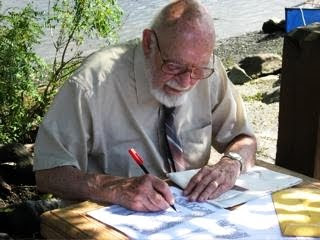 Edward Rondthaler
June 9th, 1905 to August 19th, 2009
If this were universally adopted what a revolution in linguistics--might make Wittgenstein smile.

The New York Times
Edward Rondthaler was one of the 20th century’s foremost men of letters — actual, physical, audible letters. As an outspoken advocate of spelling reform, he spent decades trying to impose order on his 26 lawless charges. As a noted typographer who first plied his trade 99 years ago, he helped bring the art of typesetting from the age of hot metal into the modern era.

From the early 1960s on, Mr. Rondthaler was known publicly for his energetic campaign to respell English, a cause that over the centuries has been the quixotic mission of an impassioned few. To spell the language as it sounds, he argued, would vanquish orthographic hobgoblins, promote literacy and make accessible to foreign readers English classics like Keats’s “Ode to a Nightingale” — or, more properly, “Oed to a Nietingael” — whose opening lines appear on this page.

Long before that, Mr. Rondthaler had already established a national reputation by helping usher in the age of photographic typesetting. Phototypesetting was for decades a vital bridge between the hot-metal days of old and the digital typography of today.

A man of strong constitution and ardent enthusiasms, Mr. Rondthaler died on Aug. 19. He was 104 and attributed his longevity to having taken cold showers daily since 1918.

His death, at his home in Cedar City, Utah, was confirmed by his son, Tim. Mr. Rondthaler previously lived for many years in Croton-on-Hudson, N.Y.

Mr. Rondthaler first became known more than 70 years ago for his seminal work in photographic typesetting. In the mid-1930s, he and a colleague, Harold Horman, perfected a phototypesetting device that helped streamline the traditional art of setting type. Known as the Rutherford photo-lettering machine, it was one of the first such devices in wide commercial use.

Armed with their new machine, the two men founded Photo-Lettering Inc., a highly respected New York typographic house whose clients included many of the country’s best-known magazines and advertising agencies.

But over time, Mr. Rondthaler came to feel his beloved letters were traducing him with their unruly behavior on the printed page. So he took up the standard for spelling reform. For decades afterward, he championed SoundSpel, a simplified English spelling system he had refined from an earlier model.

“Foenetic speling wil maek reeding and rieting neerly automatic for evrybody,” Mr. Rondthaler wrote in SoundSpel, in a passage quoted by The New York Times in a 1977 profile.

Mr. Rondthaler was a past president and the chairman emeritus of the American Literacy Council, an organization dedicated to, among other things, simplifying English spelling. With Edward J. Lias, he edited the reference book “Dictionary of American Spelling: A Simplified Alternative Spelling for the English Language” (American Language Academy, 1986).

Edward Rondthaler III was born on June 9, 1905, in Bethlehem, Pa. His father was a bishop of the Moravian Church, as was his paternal grandfather. Edward III was reared in Winston-Salem, N.C., where his father was president of Salem College.

At 5, Edward received a toy printing press as a gift and began publishing his own newspaper. (It was a very small newspaper, about the size of a postcard, his son said.) Only a few years later, he and a friend opened a print shop in a nearby basement, doing jobs for paying customers; they ran the business through high school and for a year afterward, to earn college money.

After studying at Westminster Choir College — besides singing, he played the flute, oboe and bassoon — Mr. Rondthaler earned a bachelor’s degree in psychology from the University of North Carolina, Chapel Hill, in 1929. He wrote his senior thesis on the effects of different typefaces on the reader’s perception of a text.

Mr. Rondthaler then moved to New York, where he was an art director for a commercial typesetter. In 1936, he and Mr. Horman founded Photo-Lettering, which specialized in headline and display type. The company was built around their new phototypesetting machine, which helped modernize a technology that had changed little in hundreds of years.

For centuries, type was cast in molten lead and set painstakingly by hand. In the mid-20th century, the advent of phototypesetting freed the alphabet from its leaden shackles, making it possible to manipulate letters as pure photographic images. The process let type be shrunk, enlarged, stretched and squeezed without casting a single drop of metal.

Unleashed on the page, however, Mr. Rondthaler’s letters grew devious. “O,” a small sweet orb in the typographer’s hand, became a shape-shifting fiend, pronounced “owe” (as in so), “ah” (as in on) and “ih” (as in women). And so on.

Such anarchy, Mr. Rondthaler came to believe, helped cause illiteracy and with it, a web of social ills. Among them, as he wrote in the 1977 profile in The Times, were “jooveniel delinquensy, criem-in-th-streets, hard cor unemploiment and poverty.”

In promoting SoundSpel, Mr. Rondthaler cast his lot with some eminent spelling-reform advocates of the past. One was George Bernard Shaw (1856-1950), who established a bequest for the design of a new English alphabet. Another was President Theodore Roosevelt, who in 1906 decreed that 300 English words be officially respelled. (After a vitriolic, highly literate national debate that raged in the newspapers for months, the House of Representatives rejected the plan.)

If Mr. Rondthaler’s campaign, like most efforts to reform English spelling, did not bear much fruit, he had a great deal else to occupy his time. He wrote several books, among them “Alphabet Thesaurus: A Treasury of Letter Designs” (Reinhold, 1960) and a memoir, “Life With Letters — As They Turned Photogenic” (Hastings House, 1981).

He was a prolific writer of letters to the editor, of this newspaper and others, on a variety of subjects. He wrote a song honoring the 100th anniversary of the Croton Dam. He invented things, including a slide rule that calculated currency-exchange rates and another slide rule that computed cooking times of foods based on weight.

After he turned 100, Mr. Rondthaler embarked on a new career in television commercials, appearing in campaigns for Pearle Vision and Genworth Financial.

Besides his son Tim, Mr. Rondthaler is survived by six grandchildren and 11 great-grandchildren. Two other sons, Edward IV and David Lee, died before him; his wife of 72 years, the former Dorothy Reid, died in 2002.

In 1920, at 15, young Mr. Rondthaler bought a 2-cent card and addressed it to a classmate. Inside, he wrote, “The bluebirds are flying from my heart to you.” His message was written in standard orthography.

Reader, she married him.
Posted by Mercury at 7:40 PM