107 years ago today Georges Melies took us to the moon 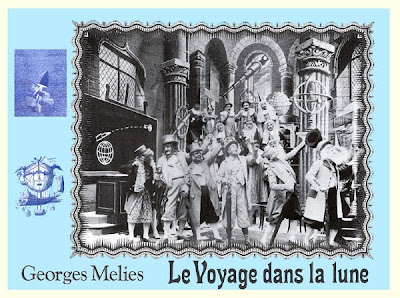 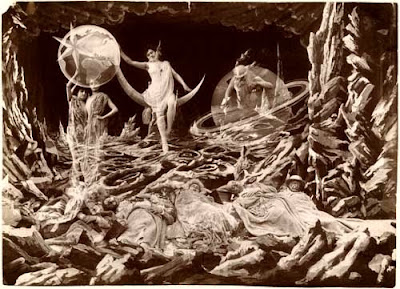 A Trip to the Moon (or Le Voyage dans la Lune for you fancy, book-learnin’ types) created a pop-culture image that’s been reproduced on everything from T-shirts to dinner plates: The man in the moon’s disgruntled face sports an oversize space capsule stuck in his right eye.

It’s obviously not to scale, and it’s playfully gruesome when you consider the pain a modestly sized celestial body would experience with a heavy hunk of medal forcibly injected into its eye socket. It could be legally considered satellite abuse. If it weren’t science fiction.

Conceived, produced and starring Méliès and inspired by the words of Jules Verne, the black-and-white silent film tells the fanciful story of a group of dandy astronomers who journey to our crater-faced neighbor, propelled by cannon shot.

After their simple projectile arrives just south of the moon’s frontal lobe, the explorers venture forth in their waistcoats and leggings into a wondrous landscape filled with craters, volcanic geysers and spiraling rock formations. They’re so amazed that they immediately take a nap. You can see for yourself in the complete video.

In their dreams, the astronomers fantasize about the moon’s sizable lady population — conjuring another famous image of Phoebe — The Lady of the Moon — swinging on a distant crescent.

After descending into a crater and discovering the moon’s underground civilization, the astronomers encounter the primitive, contortionist moon people (the Selenites — think Cirque du Soleil with better costumes).

As true scientists and the first representatives of Earth to reach the moon, they immediately kill the first beings they encounter (along with their leader) and must flee an enraged mob of spear-bearing moon folk to return to Earth.

While it’s easy enough to turn a jaundiced eye to what might seem like a primitive cinematic effort of ages past, Méliès was genuinely ahead of his time in his mastery of still-developing film techniques. He also is recognized as the first pioneer of cinematic art direction and visual effects.

Much of his on-camera production design fell back on traditional stagecraft. But Méliès became fascinated with the potential to distort reality while making countless fantasy films. Referred to in his time as the Cinemagician, Méliès would develop the use of substitute edits, dissolves, time-lapse photography and multiple exposures. He would also produce some of the world’s first color movies by hand-painting his frames.

Unfortunately, Méliès wasn’t overly industrious or prolific during his career — producing only about 550 films in his lifetime. Most of that astounding number were early horror, fantasy and sci-fi efforts — making Méliès the father of those genres.

But his creativity and inventiveness weren’t fully awarded financially during his career. In 1913, his film company went bankrupt — beaten down by bigger French and American studios. While Méliès was forced to become a toy salesman, the French army seized his films — melting them down into boot heels for soldiers during World War I (according to legend).

In time, Méliès received proper recognition from the French arts community — which provided him a home and an opportunity to perform on stage until his death in Paris at 76 on Jan. 21, 1938.

[A Trip to the Moon]

Other films by Georges Melies...


A Trip to the Moon [Wikipedia]
Posted by Mercury at 6:02 AM

Hi, Mercury. Can you tell me where the Trip to the Moon stereoscope slide comes from? It's not a still from the Melies film, so I'm wondering if it comes from the Offenbach operetta. I'm compiling a shot-by-shot analysis of Melies' film and I'd like to see more of those slides: