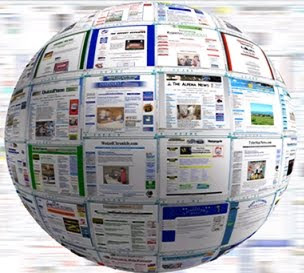 It appears that the movement by big news publishers to charge for online information is attempting to find strength in numbers [of individual publishers]. It categorically won't work. The Wall Street Journal has been cited for the success of such a venture but...

"Analysts are skeptical that any efforts to collect online subscription fees, or even small payments for individual articles, will amount to a significant new source of cash for newspaper publishers. Specialized financial publications, such as the Wall Street Journal and the Financial Times, have succeeded because they provide timely access to valuable information traders need to make money. It's not clear there's any willingness to pay for more general information about sporting events, entertainment or local news."

That is a unique situation demanding a subscription service for those that are willing to participate to aid them in making financial decisions. But would one pay to read Roger Ebert's film reviews?

Overall, it will fail and these publishers will be in a worse situation.

The media giant, advocating a model that would charge for news distributed online and on portable devices, has met recently with major publishers.

The Los Angeles Times
As newspapers across the country struggle with declining readership and advertising revenue, News Corp. executives have been meeting in recent weeks with publishers about forming a consortium that would charge for news distributed online and on portable devices -- and potentially stem the rising tide of red ink.

Chief Digital Officer Jonathan Miller has positioned News Corp. as a logical leader in the effort to start collecting fees from online readers because of its success with the Wall Street Journal Online, which boasts more than 1 million paying subscribers. He is believed to have met with major news publishers including New York Times Co., Washington Post Co., Hearst Corp. and Tribune Co., publisher of the Los Angeles Times.

"The reality is that unless a lot of people who produce news act in unison to start charging for content, then individually they will fail," said Alan D. Mutter, a former newspaper columnist and editor and consultant on new media ventures.

News Corp.'s solution is the latest proposal to publishers seeking to wring money from Internet readers to offset double-digit drops in print and online revenue. Steve Brill's Journalism Online initiative garnered attention this spring when it announced plans to create the tools to allow publishers to collect fees for digital distribution, and recently announced that more than 500 newspapers had joined.

Others who have been offering competing approaches in meetings with news executives include Borders Books and Webvan co-founder Louis Borders, according to people who have attended the briefings.

The notion of charging for digital access to news, either online or on devices, has been gaining momentum ever since the Associated Press' annual meeting in San Diego in April. William Dean Singleton, chairman of the AP and chief executive of MediaNews Group Inc., railed against the "misappropriation" of news on the Internet -- a reference widely interpreted as a swipe at search giant Google Inc.

"We can no longer stand by and watch others walk off with our work under misguided legal theories," he said. "We are mad as hell, and we are not going to take it anymore."

Wall Street Journal Editor Robert Thomson added to the invective, saying Google and other news aggregators who believe that content should be free are "parasites or tech tapeworms in the intestines of the Internet."

The hot rhetoric has yielded to more cold-eyed assessment of how to make money from the digital distribution of news. News Corp. chief Rupert Murdoch said in an analyst call this month that he hoped to "build significant revenues from the digital delivery." News Corp. is among the world's largest newspaper publishers, as the owner of the New York Post, the Times of London and nearly two dozen papers in Australia.

Industrywide, ad revenue fell 28% in the first quarter of 2009, according to the nonprofit Newspaper Assn. of America. Researchers like the Pew Research Center's Project for Excellence in Journalism say half of that decline can be blamed on the poor economy, as auto dealers go out of business and retailers close or cut back. The rest can be attributed to structural changes buffeting the industry, as readers and advertisers go online.

Although newspapers have made major strides in building online readership, the revenue hasn't followed. Internet ads account for just 12% of a newspaper's revenue, according to the association.

"This, after 10 years of effort," said veteran newspaper analyst John Morton. "The only positive thing to be said for online revenue for newspapers is it's going down less rapidly."

Analysts are skeptical that any efforts to collect online subscription fees, or even small payments for individual articles, will amount to a significant new source of cash for newspaper publishers. Specialized financial publications, such as the Wall Street Journal and the Financial Times, have succeeded because they provide timely access to valuable information traders need to make money. It's not clear there's any willingness to pay for more general information about sporting events, entertainment or local news.

"It's probably going to be small dollars," said Edward Atorino, media analyst at Benchmark Co. "For a big media company, it's going to add a little bit to a giant pile."

Mutter, the new media ventures consultant, said efforts to erect pay walls around news stories are doomed because such barriers are so easily breached by anyone who knows how to cut and paste a document.

Instead, he said a consortium, such as the one that News Corp. is proposing, would be more effective if it were to create a single online registration for readers to use across all news sites and track the stories each person reads. When married with geographic and demographic data, this anonymous reader information would be valuable to advertisers seeking to reach a particular consumer.

A consortium of newspaper publishers is bound to attract scrutiny from federal regulators, who would seek to determine whether it reduces competition, said antitrust attorney Robert W. Doyle Jr., a partner in the Washington law firm of Doyle, Barlow & Mazard.

Murdoch, who built a media empire from a single newspaper in his native Australia, has been in search of a solution to the industry's broken business model. The search has led to meetings with representatives of ventures like Journalism Online as well as makers of e-readers, those portable devices whose screens simulate the appearance of ink on paper.

Like other newspaper publishers, Murdoch has been frustrated with Amazon.com's Kindle e-reader, in part because of the unfavorable terms offered by the online bookseller, which keeps 70% of the revenue from digital subscriptions and owns the relationship with the reader. He has been interested in finding a way to distribute news to multiple devices.

Miller, who joined News Corp. in April to oversee the media company's digital strategy, has taken charge of this initiative. He talked about the need to support premium journalism in Pasadena last month, at Fortune magazine's Brainstorm: Tech conference.

In an onstage interview, Miller hinted at a broader role for News Corp., which has gained expertise in managing subscribers to Dow Jones Factiva's business information service, and whose Wall Street Journal Online has a subscriber base that could be leveraged to sell subscriptions.

"In looking at all of News Corp.'s assets, it's clear that we're in a unique position to play a key role in creating new business models that will support premium journalism on digital platforms," he said.

What justification can these publishers make? After all, the investment in materials is minimal...no ink, paper, or electricity to run the presses. The support staff is minimal. And they are placing a high value on journalistic writing that many times has proven to be erroneous.
Posted by Mercury at 4:23 AM

this should prove interesting....getting the cat back into the bag