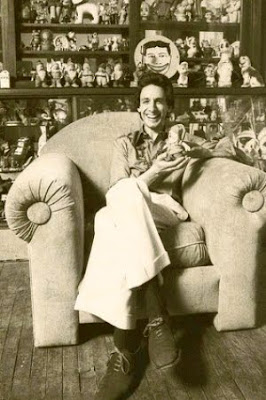 Lester Glassner
February 23rd, 1939 to August 9th, 2009
In early April of this year I posted a poll on "collecting". The result was 50/50. In The Los Angeles Times this morning was an obituary for Lester Glassner a collector's collector of pop culture. This is an extreme case of collecting and blows my comment about the dispersal of a collection when one gets older. Glassner was 70.

"Lester Glassner dies at 70; Collector of pop-culture and dime-store merchandise"

His collecting began with a Mickey Mouse lamp he bought in the early 1960s, and grew to a massive assortment of vintage movie memorabilia, dime-store merchandise and other pop-culture artifacts.

The Los Angeles Times
When Lester Glassner died of pancreatic cancer Aug. 9 in hospice care at Beth Israel Medical Center in New York City at age 70, he left behind a major part of his life that he had spent nearly 50 years accumulating.

The one-time picture editor, designer and art librarian for CBS Records had a massive collection of vintage movie memorabilia, dime-store merchandise and other pop-culture artifacts numbering in the hundreds of thousands.

It began with a Mickey Mouse lamp that he bought for a couple of dollars at a junk shop in Buffalo, N.Y., in the early 1960s.

"He just started building collections of all sorts from his 20s forward, and he never stopped," said his sister, Freda Honig.

Glassner's longtime obsession led to his collaborating with photographer Brownie Harris on "Dime-Store Days," an illustrated book published by Viking Press in 1981 and featuring prime samples from his various collections.

The book included a foreword by a friend of Glassner's, British writer and gay icon Quentin Crisp. The introduction was written by another friend: Anita Loos, author of the 1925 comic novel "Gentlemen Prefer Blondes."

In her introduction, Loos wrote of a young Glassner finding escape during World War II by wandering the aisles of five-and-dime stores that were laden with "treasures so colorful that they turned his whole drab life into a world of fantasy."

Glassner's highly personal book spurred cover stories on him in antique and collectible magazines, as well as a visit to his East Village home by the "Today" show.

So impressively enormous was Glassner's overall collection that a visitor once declared it to be "impossible to imagine beforehand or exaggerate after seeing."

"It was on every floor, and he had showcases everywhere," Honig said. "There are so many collections within collections."

"There are hats. When Anita Loos passed away, she left him her hat collection. There are mechanical toys. There are World War II propaganda posters. There are antique Seven Dwarfs of various types. . . . Oh, and he had a huge collection of antique postcards of all types. And autographed photos of famous people."

Glassner's collection of movie stills alone numbers more than 250,000 photos, many of them rare.

"He also had an antique jewelry collection," Honig said. "I don't know how I couldn't start by telling you about that. It is absolutely massive. But he's left that collection to me, which was very sweet of him to do."

Honig said the front room of her brother's home on East 7th Street "was kept darkened when it wasn't being shown to protect it from the elements. And the air conditioning was kept on, so it was climate-controlled the best he could in a house of that age to keep things in pristine condition."

Louis Pappas, a friend and fellow collector who first met Glassner in the 1960s and described him as a "very genteel, very cerebral person," said first-time visitors to Glassner's home were no less than stupefied by what they saw.

"The collection was that enormous," said Pappas, a former East Village resident now living in Brooklyn. "It was almost like a museum, really, the whole place. I'd say it was one of the major collections in the world."

"I cleaned his collection at one time -- the toys -- piece by piece. It took me months."

Born Feb. 23, 1939, in Buffalo, Glassner grew up in a number of upstate New York cities, such as Auburn and Syracuse.

A 1961 graduate of Pratt Institute in New York City, he designed more than 50 books during his career, most of them movie-related. He was involved in a new design for the American Heritage Dictionary.

An exhibition of selected pieces from Glassner's "Dime-Store Days" collection was presented in Tokyo in 1987. In 2005, Glassner's World War II American Propaganda collection was exhibited in Japan alongside examples of Japanese propaganda posters.

In 2001, he donated nearly 500 movie posters to the Library of Congress.

Seeking a quieter area to live in, Glassner decided to pack up and move from the East Village to a refurbished five-story home in Harlem last year.

"It was," Honig acknowledged with a laugh, "no easy feat."

She said, however, that her brother had a couple of medical problems before he was diagnosed with cancer earlier this year and never had the time to unpack his collection.

An assistant who had worked with her brother for years has been at the home in Harlem unpacking and organizing things since July, Honig said.

Before he died, Glassner made plans to donate more than 2,500 books to the library at Buffalo State College.

"It is one of the largest donations we've ever received for special collections, because many of the books were 18th and 19th century children's books and books that dealt exclusively with the African American experience in the United States," said Maryruth Glogowski, associate vice president for library and instructional technology at Buffalo State College.

"He also has a large collection of art, photography, architecture, fashion, painting and sculpture books, and those will go into the general collection," she said.

The donation of books will be known as the Lester Glass- ner Collection.

In addition to Honig, Glassner is survived by his brother, William.

I recently came accross your blog and have been reading along. I thought I would leave my first comment. I dont know what to say except that I have enjoyed reading. Nice blog. I will keep visiting this blog very often.

I first met Lester in 1964 when we were in our 20's. It was a joy to know him! By his own admission, his collection symbolized the fantasy world he escaped to in difficult times. Although much has been said and written about his collections, I wanted to mention something else - that he was a sensitive, caring, generous and dear person. We saw each other several times a year before I moved to the west coast, then every few years whenever I could get to New York. I shall forever miss one of my dearest friends.

Nice personal testimonial. In years past I was a packrat and collected all sorts of things. Now in my senior years I have discovered that I don't need much but I am glad that Lester's collection survives.