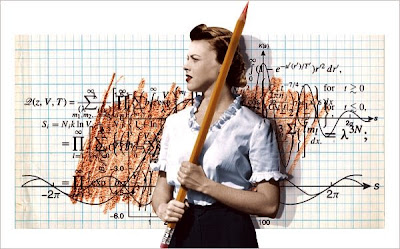 Slowly but surely, the disparities are being erased.

The New York Times
Until recently, the impact of Title IX, the law forbidding sexual discrimination in education, has been limited mostly to sports. But now, under pressure from Congress, some federal agencies have quietly picked a new target: science.

The National Science Foundation, NASA and the Department of Energy have set up programs to look for sexual discrimination at universities receiving federal grants. Investigators have been taking inventories of lab space and interviewing faculty members and students in physics and engineering departments at schools like Columbia, the University of Wisconsin, M.I.T. and the University of Maryland.

So far, these Title IX compliance reviews haven't had much visible impact on campuses beyond inspiring a few complaints from faculty members. (The journal Science quoted Amber Miller, a physicist at Columbia, as calling her interview "a complete waste of time.") But some critics fear that the process could lead to a quota system that could seriously hurt scientific research and do more harm than good for women.

The members of Congress and women’s groups who have pushed for science to be "Title Nined" say there is evidence that women face discrimination in certain sciences, but the quality of that evidence is disputed. Critics say there is far better research showing that on average, women’s interest in some fields isn’t the same as men’s.

In this debate, neither side doubts that women can excel in all fields of science. In fact, their growing presence in former male bastions of science is a chief argument against the need for federal intervention.

Despite supposed obstacles like "unconscious bias" and a shortage of role models and mentors, women now constitute about half of medical students, 60 percent of biology majors and 70 percent of psychology Ph.D.'s. They earn the majority of doctorates in both the life sciences and the social sciences. They remain a minority in the physical sciences and engineering. Even though their annual share of doctorates in physics has tripled in recent decades, it’s less than 20 percent. Only 10 percent of physics faculty members are women, a ratio that helped prompt an investigation in 2005 by the American Institute of Physics into the possibility of bias.

But the institute found that women with physics degrees go on to doctorates, teaching jobs and tenure at the same rate that men do. The gender gap is a result of earlier decisions. While girls make up nearly half of high school physics students, they’re less likely than boys to take Advanced Placement courses or go on to a college degree in physics.

These numbers don't surprise two psychologists at Vanderbilt University, David Lubinski and Camilla Persson Benbow, who have been tracking more than 5,000 mathematically gifted students for 35 years.

They found that starting at age 12, the girls tended to be better rounded than the boys: they had relatively strong verbal skills in addition to math, and they showed more interest in "organic" subjects involving people and other living things. Despite their mathematical prowess, they were less likely than boys to go into physics or engineering.

But whether they grew up to be biologists or sociologists or lawyers, when they were surveyed in their 30s, these women were as content with their careers as their male counterparts. They also made as much money per hour of work. Dr. Lubinski and Dr. Benbow concluded that adolescents' interests and balance of abilities — not their sex — were the best predictors of whether they would choose an "inorganic" career like physics.

A similar conclusion comes from a new study of the large gender gap in the computer industry by Joshua Rosenbloom and Ronald Ash of the University of Kansas. By administering vocational psychological tests, the researchers found that information technology workers especially enjoyed manipulating objects and machines, whereas workers in other occupations preferred dealing with people.

Once the researchers controlled for that personality variable, the gender gap shrank to statistical insignificance: women who preferred tinkering with inanimate objects were about as likely to go into computer careers as were men with similar personalities. There just happened to be fewer women than men with those preferences.

Now, you might think those preferences would be different if society didn't discourage girls and women from pursuits like computer science and physics. But if you read 'The Sexual Paradox," Susan Pinker's book about gender differences, you’ll find just the opposite problem.

Ms. Pinker, a clinical psychologist and columnist for The Globe and Mail in Canada (and sister of Steven Pinker, the Harvard psychologist), argues that the campaign for gender parity infantilizes women by assuming they don't know what they want. She interviewed women who abandoned successful careers in science and engineering to work in fields like architecture, law and education — and not because they had faced discrimination in science.

Instead, they complained of being pushed so hard to be scientists and engineers that they ended up in jobs they didn’t enjoy. "The irony was that talent in a male-typical pursuit limited their choices," Ms. Pinker says. "Once they showed aptitude for math or physical science, there was an assumption that they’d pursue it as a career even if they had other interests or aspirations. And because these women went along with the program and were perceived by parents and teachers as torch bearers, it was so much more difficult for them to come to terms with the fact that the work made them unhappy."

Ms. Pinker says that universities and employers should do a better job helping women combine family responsibilities with careers in fields like physics. But she also points out that female physicists are a distinct minority even in Western European countries that offer day care and generous benefits to women.

"Creating equal opportunities for women does not mean that they'll choose what men choose in equal numbers," Ms. Pinker says. "The freedom to act on one's preferences can create a more exaggerated gender split in some fields."

Applying Title IX to science was proposed eight years ago by Debra Rolison, a chemist at the Naval Research Laboratory. She argued that withholding federal money from "poorly diversified departments" was essential to "transform the academic culture." The proposal was initially greeted, in her words, with "near-universal horror."

Some female scientists protested that they themselves would be marginalized if a quota system revived the old stereotype that women couldn't compete on even terms in science. But the idea had strong advocates, too, and Congress quietly ordered agencies to begin the Title IX compliance reviews in 2006.

The reviews so far haven't led to any requirements for gender balance in science departments. But Christina Hoff Sommers, a resident scholar at the American Enterprise Institute who has written extensively about gender wars in academia, predicts that lawyers will work gradually, as they did in sports, to require numerical parity.

"Colleges already practice affirmative action for women in science, but now they'll be so intimidated by the Title IX legal hammer that they may institute quota systems," Dr. Sommers said. "In sports, they had to eliminate a lot of male teams to achieve Title IX parity. It'll be devastating to American science if every male-dominated field has to be calibrated to women’s level of interest."

Whether or not quotas are ever imposed, some of the most productive science and engineering departments in America are busy filling out new federal paperwork. The agencies that have been cutting financing for Fermilab and the Spirit rover on Mars are paying for investigations of a problem that may not even exist. How is this good for scientists of either sex?
Posted by Mercury at 9:28 AM