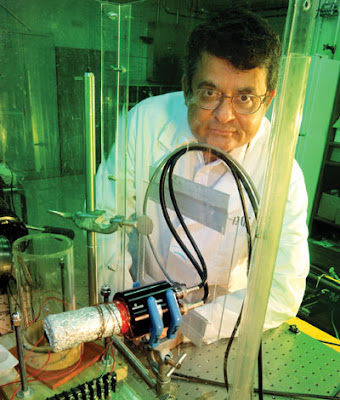 Rusi Taleyarkhan
Ah, a revival of those old TV Saturday night fights. In this corner Rusi Taleyarkhan claiming he is innocent of fraudulent scientific reports on cold fusion and in this corner the Purdue committee claiming his papers were fraudulent. Makes one wonder what happened to the solid peer review process even before the papers were published in Physical Review Letters journal.

The New York Times
INDIANAPOLIS (AP) -- A Purdue University panel has found two instances of misconduct by a researcher who claims he produced nuclear fusion in tabletop experiments.

Rusi Taleyarkhan made headlines in 2002 when he published a paper in the journal Science claiming that he had produced nuclear fusion by making tiny bubbles collapse in a liquid. The new report found misconduct in subsequent papers.

The Purdue committee, which includes representatives from other schools, said that in a follow-up paper published in 2006 in Physical Review Letters, Taleyarkhan falsely claimed that his 2002 work had been confirmed independently. In fact, Taleyarkhan was extensively involved in the work he claimed was done independently of him, the committee found.

The panel also found that in a pair of 2005 papers, Taleyarkhan added another person as an author even though that researcher did not substantially contribute.

The committee did not investigate the 2002 paper itself, in which Taleyarkhan and colleagues reported signs of nuclear fusion in a small laboratory device. Scientists have long sought a simple way to produce fusion in hopes of harnessing it as an energy source.

The original paper six years ago was met with widespread skepticism. In an unusual move, Science published a companion piece from two researchers at Oak Ridge National Laboratory in Tennessee -- where Taleyarkhan worked at the time -- that said they could not reproduce the result.

Other scientists, including some at Purdue, where Taleyarkhan now works, have tried without success to independently reproduce his results.

A spokeswoman for Science said Friday that the journal ''will consider the implications'' of the new report's findings for the 2002 paper.

In a statement released Friday by his attorney, Taleyarkhan said he will take the time to review his options.

Taleyarkhan has contended that other scientists have replicated his work and has accused his critics of conflict of interest, jealousy and other motives. He filed a defamation lawsuit this year accusing two Purdue professors of trying to destroy him and his reputation.

The Purdue committee submitted its findings in April to the Office of Naval Research, which funded some of Taleyarkhan's research. Purdue said Friday the naval office accepted the report, calling it prompt, thorough and objective.

''From small beginnings there developed a tangled web of wishful thinking, scientific misjudgment, institutional lapses and human failings,'' the committee wrote. ''Each strand could have been resolved separately, but knitting them together produced a crisis.''

University policy includes a 30-day appeal process for Taleyarkhan. Purdue said it will not comment on the report's content during that period, but David J. Williams, who leads the Purdue University Senate's Faculty Affairs Committee, said the document is an unflinching look at the case.

''Issues of research integrity are of the utmost importance to the university,'' Williams said.

Any decision on sanctions by the university would come after the appeals process is over.

Gene Sprouse, editor-in-chief of the American Physical Society, which publishes Physical Review Letters, said the society would also take no action before the appeal period has expired.
Posted by Mercury at 5:36 PM