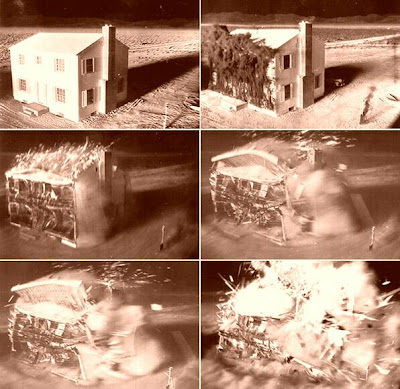 House No. 1, located 3,500 feet from ground zero, was completely destroyed on the first day of testing. The elapsed time from the first picture to the last was 2⅔ seconds. The camera was completely enclosed in a 2-inch lead sheath as a protection against radiation. The only source of light was that from the detonation. Frame No. 1 (upper left) shows the house lighted by the blast. Frame No. 2 (upper right) shows the house on fire.

Wired
1945: The first atomic bomb is tested successfully at the Alamogordo Bombing and Gunnery Range in a remote section of desert near Los Alamos, New Mexico. The instant the bomb detonated at 5:30 a.m. that Monday, the atomic age was born, and the world changed forever.

The Trinity test, as it was known, was the culmination of the American effort to win the race against Germany (and, ultimately, the Soviet Union) in building an atomic bomb. A mere three weeks after the test, the United States used atomic bombs to destroy the Japanese cities of Hiroshima and Nagasaki.

But prior to the 16th, none of those involved in the project knew if they had built a devastating new weapon or a spectacular dud.

With gallows humor, the Los Alamos physicists got up a betting pool on the possible yield of the bomb. Estimates ranged from zero to as high as 45,000 tons of TNT. Enrico Fermi, who won the Nobel Prize for Physics in 1938 for his work on nuclear fission, offered side odds on the bomb destroying all life on the planet.

J. Robert Oppenheimer, scientific director of the Manhattan Project, was under no illusions about what he and his fellow physicists had wrought. The effects of the blast, the equivalent of 20,000 tons of TNT, moved the intellectual Oppenheimer to quote from the Bhagavad Gita: "If the radiance of a thousand suns were to burst at once into the sky, that would be like the splendor of the mighty one. Now I am become Death, destroyer of worlds."

The scientists and military men who were at the Trinity site when the detonation occurred were staggered by what they saw. T. F. Farrell, a brigadier general on the staff of Major Gen. Leslie Groves, the Manhattan Project's military commander, wrote:

The effects could well be called unprecedented, magnificent, beautiful, stupendous and terrifying. No man-made phenomenon of such tremendous power had ever occurred before. The lighting effects beggared description. The whole country was lighted by a searing light with the intensity many times that of the midday sun. It was golden, purple, violet, gray and blue. It lighted every peak, crevasse and ridge of the nearby mountain range with a clarity and beauty that cannot be described but must be seen to be imagined.
The blast, which sent a mushroom cloud boiling 38,000 feet into the sky, was both visible and audible for hundreds of miles around. The heat generated at the blast point was described as being 10,000 times hotter than the surface of the sun. Even at 10 miles removed from ground zero, witnesses said the resulting heat wave was like standing directly in front of a roaring fireplace.

While Oppenheimer said he never regretted helping develop the bomb, he did have second thoughts about the way the United States used it against Japan. Lamont Lansing's book, Day of Trinity, quotes Oppenheimer, then near the end of his life:

As for how we used it, I understand why it happened and appreciate with what nobility those men with whom I'd worked made their decision. But I do not have the feeling that it was done right. The ultimatum to Japan was full of pious platitudes.... Our government should have acted with more foresight and clarity in telling the world and Japan what the bomb meant.
Source: Trinity Atomic Web Site
Posted by Mercury at 8:52 AM