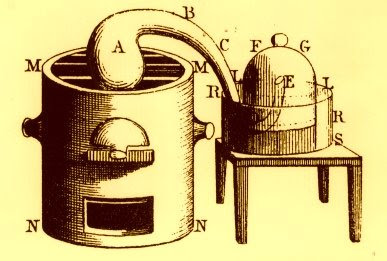 In 1777, Lavoisier conducted an experiment that established a fatal shortcoming of the phlogiston theory. He heated mercury and air using a bell-jar for 12 days. Red mercury calx (now HgO) formed and the volume of air decreased from 50 to 42 in3. The remaining air was determined to be atmospheric mofette, and later renamed azote (now nitrogen). The red [HgO] was heated in a retort producing 8 in3 of dephlogisticated air [O2]. The sequence of experiments established that heat caused formation of a calx (the doctrine of phlogiston explained phlogiston was released):

and then stronger heating reverted the calx back to the original substances (which the doctrine of phlogiston would predict to be impossible):

HgO(s)---->Hg(l) + O2(g)
First of all, "phlogiston" is pronounced "flōjis'ton". It's origin is ancient Greek...φλογιστόν phlŏgistón "burning up". Its establishment added to the early Greek science hypotheses describing the universe whose constituents, they believed, were Earth, water, air, and fire by Johann Joachim Becher [May 6th, 1635 to October 1682] and popularized by G. E. Stahl [1694–1716]. This is one of those hypotheses that just lingers and finally met its demise with Lavoisier. It can be complicated and convoluted but essentially it replaced "air and fire" with "phlogiston" in an attempt to express chemical reaction via "...postulates that in all flammable materials there is present phlogiston, a substance without color, odor, taste, or weight that is given off in burning. "Phlogisticated" substances are those that contain phlogiston and, on being burned, are "dephlogisticated." The ash of the burned material is held to be the true material." What is most fascinating is the transition of alchemical practices to the rigors of empirical analysis and a more sound epistemology of chemistry.

"The 'Instrumental' Reality of Phlogiston"

The stability of phlogiston in eighteenth-century French chemistry depended not on its role as a comprehensive theory, but on its operational (instrumental), theoretical, and philosophical (speculative) identities that were forged in different contexts, yet were interwoven to designate a single substance. It was as ‘real’ as any other chemical substance to the degree that it was obtained through material operations, occupied a place in the theoretical edifice of the affinity table, and was endowed with a corpuscular ontology. Lavoisier labeled it as an ‘imaginary’ substance because it offered a unique resistance to his vision of the new chemistry based on ‘metric’ measurements and algebraic representations.


The 'Instrumental' Reality of Phlogiston 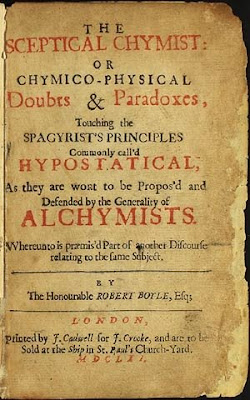 "The Sceptical Chymist...is a long dialogue concerning the nature and number of the elements. Boyle does not know how many elements there are or what those elements may be; however, he argues that those who believe the elements to be earth, air, fire, and water (following Aristotle and the ancients) or mercury, sulfur, and salt (following more recent alchemical doctrine) do so on an insufficient basis. The cast of characters includes Carneades (representing Boyle's opinions), Themistius (representing the four-element system of the ancients), Philoponus (representing the three-principle system of the alchemists), and Eleutherius (an interested observer)."