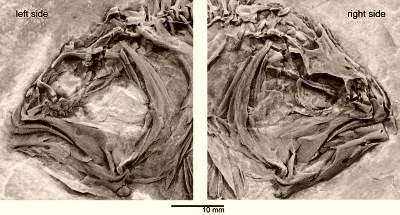 Skull of heteronectes chaneti, showing incomplete orbital migration intermediate between generalized fishes and living flatfishes.
Say that five time with no errors. One has to ask in form of the "Capitol One" commercial..."What's in your fossil collection"?

Is this a case for "evolution"?:

"What we found was an intermediate stage between living flatfishes and the arrangement found in other fishes," he said. These two fossil fishes "indicate that the evolution of the profound cranial asymmetry of extant flatfishes was gradual in nature."

Hidden away in museums for more that 100 years, some recently rediscovered flatfish fossils have filled a puzzling gap in the story of evolution and answered a question that initially stumped even Charles Darwin.

All adult flatfishes--including the gastronomically familiar flounder, plaice, sole, turbot, and halibut--have asymmetrical skulls, with both eyes located on one side of the head. Because these fish lay on their sides at the ocean bottom, this arrangement enhances their vision, with both eyes constantly in play, peering up into the water.

This remarkable arrangement arises during the youth of every flatfish, where the symmetrical larva undergoes a metamorphosis to produce an asymmetrical juvenile. One eye 'migrates' up and over the top of the head before coming to rest in the adult position on the opposite side of the skull.

Opponents of evolution, however, insisted that this curious anatomy could not have evolved gradually through natural selection because there would be no apparent evolutionary advantage to a fish with a slightly asymmetrical skull but which retained eyes on opposite sides of the head. No fish—fossil or living—had ever been discovered with such an intermediate condition.

But in the 10 July 2008 issue of Nature, Matt Friedman, graduate student in the Committee on Evolutionary Biology at the University of Chicago and a member of the Department of Geology at the Field Museum, draws attention to several examples of such transitional forms that he uncovered in museum collections of underwater fossilized creatures from the Eocene epoch--about 50 million years ago.

"We owe this discovery, in part, to the European fondness for limestone," said Friedman. The fossils, which he found in museums in England, France, Italy, and Austria, came from limestone quarries in Northern Italy and underneath modern-day Paris.

"Amphistium has been known for quite some time," he said. "The first specimen was described more than 200 years ago, but its placement in the fish evolutionary tree has been uncertain ever since. Close examination of these fossils yield clues that they are indeed early flatfishes."

The most primitive flatfishes known, both Amphistium and Heteronectes have many characteristics that are no longer found in modern flatfish. But the one that caught Friedman's attention was the partial displacement of one eye, evident even in the first Amphistium fossil discovered over two centuries ago.

"What we found was an intermediate stage between living flatfishes and the arrangement found in other fishes," he said. These two fossil fishes "indicate that the evolution of the profound cranial asymmetry of extant flatfishes was gradual in nature."

The Amphistium fossils were known and previously analyzed but not definitively linked to flatfish. Previous studies, relying on conventional techniques, did not detect the oddly shaped skull, but by performing CT scans on the fossils Friedman "unequivocally" demonstrated the cranial asymmetry.

Careful study of the Heteronectes chaneti fossil found that it represents a new genus. The genus name is derived from the Greek Heteros (different) and nectri (swimmer). The species, chaneti, honors Bruno Chanet, a pioneer in the study of fossil flatfish.

The two fossil sets "deliver the first clear picture of flatfish origins," said Friedman, "a hotly contested issue in debates on the mode and tempo of evolution."

Charles Darwin was baffled by what he referred to as the "remarkable peculiarity" of flatfish anatomy. "During early youth," he noted, the eyes "stand opposite to each other…Soon the eye proper to the lower side begins to glide slowly round the head to the upper side…The chief advantages thus gained seem to be protection from their enemies, and a facility for feeding on the ground."

Although the survival advantages of such asymmetry were clear, Darwin, when challenged, was unable to explain the mechanism of what appeared to be a rather sudden and radical change in morphology and suggested a Lamarckian adaptation in which the fish, through "muscular action," slowly pulled the down-side eye toward the upper side. The resulting distortion, he suggested, "would no doubt be increased through the principle of inheritance."

Darwin's explanation, which relied on the inheritance of acquired traits, preceded the discovery of genes, but geneticist Robert Goldschmidt, tackling the same flatfish issue in the 1930s, came up with a genetic explanation. He argued that such a sudden drastic change could be triggered by a single fortuitous mutation that triggered a deformity, which in some environments would prove beneficial--and then get passed on. He termed these sudden accidental evolutionary leaps "hopeful monsters," and made the mysterious origin of flatfishes the centerpiece of his argument.

Friedman's discovery eliminates the need for such optimistic accidents. It "refutes these claims of radical sudden change" he said, "and demonstrates that the assembly of the flatfish body plan occurred in a gradual, stepwise fashion."

Source: University of Chicago
Posted by Mercury at 10:55 AM