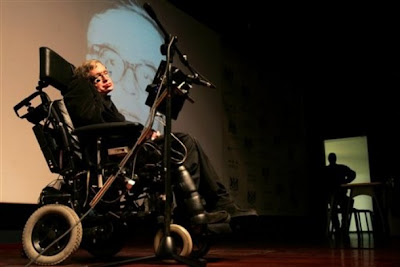 This appears to be "much ado about nothing". I am not sure of the purpose of this whole story. Sure, Hawking is annoyed about the state of the sciences in England but some of that has been rectified. Hawking has obtained iconic status, like Einstein, and little else save the co-authorship of a book with his daughter. Hawking hasn't contributed much in quite a long time and has been Lucasian Chair at Cambridge doling out sporadic lectures and basically polishing the academic esteem of Cambridge University.

Here are two articles: CBCnews and the Canadian National Post.

CBCnews
The University of Cambridge has poured cold water on reports its most famous physicist might be coming to Canada to work, saying Wednesday Stephen Hawking "has no plans" to leave.

A report in the Daily Telegraph in the U.K. said Hawking was contemplating joining his colleague Neil Turok at Waterloo, Ont.'s Perimeter Institute. The South African-born cosmologist Turok, 49, is leaving Cambridge to take over the role of executive director at the institute, which was founded in 2000 by Research in Motion co-founder Mike Lazaridis and is devoted to the study of theoretical physics.

But Turok, who will start a five-year term at Perimeter on Oct. 1, said when he was hired that his colleague Hawking had an open invitation to join Perimeter for a few months. Hawking is expected to visit the institute in the fall.

Perimeter spokesman John Matlock said Wednesday the report of Hawking's possible arrival has been exaggerated. Last month Matlock said there have been discussions with Hawking about visiting the institute for a few months but nothing had been decided.

Turok left Cambridge in part because of his frustration over government funding, particularly his inability to secure a commitment to expand Cambridge's Centre for Theoretical Cosmology and rename it after Hawking, who has also expressed his displeasure over funding cuts to research.

Cambridge said in its statement that Hawking was looking forward to continuing to work at the Centre for Theoretical Cosmology.

"Stephen's hope is that this will soon be established as the world's leading centre for research in theoretical cosmology and indeed that, in due course, will expand into a large permanent institute for research into fundamental physics," the university said.

Hawking's graduate assistant Sam Blackburn had told the Telegraph on Tuesday, "I think Professor Hawking is mulling it over but a move isn't imminent."

"He would not make plans to permanently move to a place he hasn't visited yet, but he is open to it," he said.

Turok told the Telegraph that Hawking plans to visit in 2009 and "we would certainly welcome him coming for longer."

Part of Perimeter's attractiveness is its access to funding: last month Lazaridis donated an additional $50 million to the institute, bringing his total contribution to the centre for theoretical physics to $150 million.

Hawking, best known for his book A Brief History of Time, is one of the few physicists in the world who has achieved celebrity status outside his field, having made guest appearances on episodes of Star Trek: The Next Generation and The Simpsons. The scientist, who uses a wheelchair, has ALS, also known as Lou Gehrig's disease.

Hawking is currently the Lucasian Professor of Mathematics at Cambridge, a prestigious title once held by Sir Isaac Newton and computer pioneer Charles Babbage.

National Post
Earlier this week, a story in The Daily Telegraph suggested that the legendary physicist Stephen Hawking -- who occupies the sacred Lucasian Chair at Cambridge where Newton, Babbage, and Dirac once perched -- is so infuriated over Labour government cuts to basic research funding in Britain that he is considering a transatlantic move to the new Perimeter Institute for Theoretical Physics in Waterloo, Ont. For a brief moment, one couldn't help feeling excited for Canada.

OK, sure, having a sympathetic friend slip over to the pub with a journalist to plant a frightening rumour is a standard piece of gamesmanship for any media-savvy celebrity, academic or otherwise. No one in science, after all, is more sophisticated about media than Hawking. And, OK, sure, maybe his stature in the profession is just a tiny bit exaggerated in popular culture as a consequence of his poignant struggle with degenerative disease. (Honestly, it has been a little hard to swallow the repeated
comparisons with Einstein, and the research community must have often ground its teeth quietly to hear him lionized uncritically as the most significant living figure in physics, with Murray Gell-Mann still hanging around -- along with, until 2005, Hans Bethe.) Still, one would have to have the patriotic instincts of a fungus not to experience a sudden intake of breath at the idea of Stephen Hawking coming here. And it is doubly thrilling to imagine that it could happen as a consequence of the success of Canadian tech champion Research in Motion, whose co-founder Mike Lazaridis is providing much of the funding for the Perimeter Institute.

Sadly, spokesmen close to Mr. Hawking poured cold water on the idea yesterday, insisting that there are no plans for a move to Canada (although it can be argued that these latter denials are, for all that, barely more authoritative than the highly torqued original Telegraph story). Still, the brief spasm of nationalist euphoria is instructive. Now that the hubbub has receded, it's worth asking: What would we really be getting anyway if Mr. Hawking migrated to our shores?

Waterloo is already one of the great sites for physics pilgrimage on the continent. Mr. Hawking's presence at the Perimeter Institute certainly would solidify that reputation, start the institute off with an attention-getting coup and inspire young people from sea to sea. On the other hand, it is easy to forget -- on account of his long-standing infirmity, which has imparted to him a certain grim timelessness -- that the great man is 68 years of age. Frankly, even the most dynamic and youthful physicists have generally put their best work behind them by that time (in many cases, decades behind them). And presumably there are strict limits on the amount of mentoring Mr. Hawking can do (communication being much more difficult for him than it often appears to be when he is giving prepared remarks).

If Mr. Hawking does not, or cannot, come to Waterloo, it may perhaps be a blessing in disguise. The classical model for shops such as the Perimeter Institute is the Institute for Advanced Study (IAS), adjacent to Princeton University, where Einstein, Godel and other monumental figures found refuge from the self-destruction of European civilization in the 1930s and '40s. The IAS has been much-imitated, and some truly immortal work has been done there (particularly by John von Neumann). But on the whole, the institute has not, perhaps, lived up to the promise of the radiant names on its founding charter.

It is all very well to give accomplished scientists some space and funding, leave them be and expect genius to come pouring out. And sometimes it happens, though seemingly no more often than it does when we expect them to lecture to the occasional undergraduate and write up grant applications in exchange for a nice living.

What Canada really wants, and what the focus of our research efforts should be, is to locate the world's next Stephen Hawking, not to feather the bed of the one we've got already. Unfortunately, it is hard to know where he might come from. There are no hard-and-fast rules. Trying to find him will be unglamourous, compared to gathering at the feet of his formidable predecessor. It will probably involve thousands of university administrators and department heads placing bets on many students and aspiring thinkers, most of whom will never become more than humble spear-carriers for the tradition of pure research. But if that one bright light can be found and nurtured, it will have been more than worth it.

Stephen Hawking's warnings
Posted by Mercury at 6:35 AM