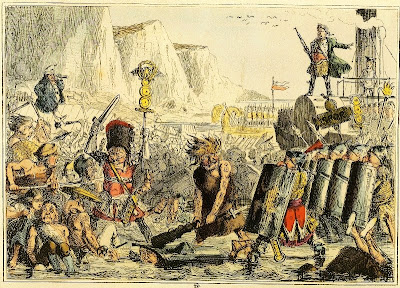 If you recall a few days ago I referenced an item regarding the specific time of Homer's Odysseus and his return home...now scientists are trying to pinpoint Caesar's invasion of Britain.

"Doubt over date for Brit invasion"

Julius Caesar's invasion of Britain in 55BC could not have occurred on the dates stated in most history books, a team of astronomers have claimed

BBC
The traditional view is that Caesar landed in Britain on 26-27 August, but researchers from Texas State University say this cannot be right.

Dr Donald Olson, an expert on tides, says that the English Channel was flowing the wrong way on this date.

They instead favour an invasion of the south coast at Deal on August 22-23.

The claims appear in the latest issue of Sky & Telescope magazine.

Caesar came to Britain with 100 warships and two legions comprising 10,000 men. But as he approached Dover's white cliffs, spear-wielding Celtic warriors lined up along the ridge, prompting the Roman leader to look for a better landing spot.

He ordered his fleet to move along the coast, and after travelling about seven miles they came to "an open and flat shore".

What has been a matter of some debate is whether Caesar sailed left or right and when exactly his armada landed.

Caesar mentioned strong tides, a full Moon and an ocean current. The astronomers Edmund Halley and George Airy previously used this information to try to solve the problem. But they disagreed with each other's conclusions.

Dr Olson identified August 2007 as a rare opportunity to investigate the question of when Caesar landed.

During this month, complex tidal factors involving the Moon and Sun would unfold in a near-perfect replay of those in August of 55 BC. So the researchers conducted an expedition to the south coast of England in order to investigate their idea.

On the day which corresponded closely to the traditional date for the invasion, Dr Olson carried out a basic experiment - dropping an apple into the sea off Deal pier at roughly the time of afternoon when Caesar described the fleet moving.

The apple floated south-west towards Dover, suggesting that the Roman fleet could not have travelled up to Deal from Dover on that day.

Caesar's account led the researchers to focus on a possible invasion date a few days earlier.

On the day corresponding to the revised date of 22-23 August, the team chartered a sightseeing boat and took GPS readings to determine how the boat was drifting.

They found the boat was floating north-east towards Deal.

This is the beach preferred by most historians but rejected by tide experts in the past. A modified reading of Caesar's reference to the "night of a full Moon" also leads to the August 22-23 date, Dr Olson claimed.

"The scientists were right about the tidal streams and so were the historians about the landing site," he explained.

New Date for Caesar's British Invasion
Posted by Mercury at 7:07 AM